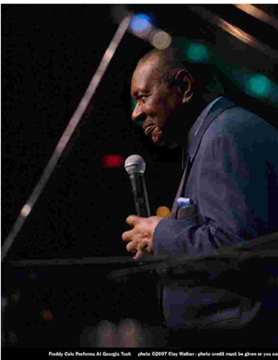 The inaugural Florida Jazz & Blues Festival will take place in Tallahassee at the Capital City Amphitheater in Cascades Park from Sept. 23-25.

The three-day festival will include performances by more than 20 acts, among them Lady Bianca, the Count Basie Orchestra and Brian Lynch. Other scheduled artists include the Freddy Cole Trio, Marcus Roberts and the Modern Jazz Generation, the Cleveland Eaton Trio, Mac Arnold and Mr. Sipp “The Mississippi Blues Child.”

The festival will also pay homage to two Florida-born jazz legends who lived in Tallahassee, saxophonist Cannonball Adderley and his brother, cornetist Nat Adderley. The tribute to both brothers will include faculty from Florida State University and Florida A&M University.

Grammy-winner and director of the Count Basie Orchestra, Scott Barnhart, will serve as the festival’s artistic director. Gary Anton, owner of the Bradfordville Blues Club and a teacher at Florida State University, will serve as its blues director.

Like so many jazz festivals this year, New York’s avant-garde Vision Festival was canceled due to the pandemic. But its organizers, Arts for Art, didn’t … END_OF_DOCUMENT_TOKEN_TO_BE_REPLACED

As previously reported in JazzTimes, the National Endowment for the Arts, in collaboration with SFJAZZ, is hosting a special online-only concert on Thursday, August 20, … END_OF_DOCUMENT_TOKEN_TO_BE_REPLACED

UPDATE 4/10/20 1:55 PM: The listening session will only happen live on Zoom due to technical issues with Facebook. Thanks! As the old saying goes, … END_OF_DOCUMENT_TOKEN_TO_BE_REPLACED

Arts For Art (AFA), a New York City-based nonprofit organization for the promotion and advancement of avant-garde jazz, celebrates its 25th year of programming with … END_OF_DOCUMENT_TOKEN_TO_BE_REPLACED