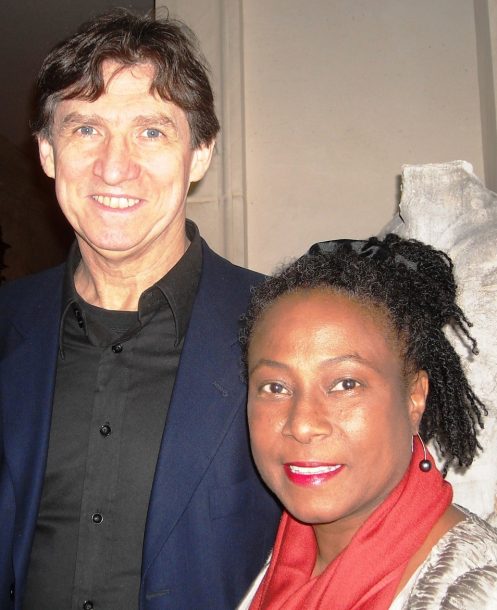 When, as a child, I filled my plate at family dinnertime with more than I could possibly consume my Father would say, “Son, I think your eyes are bigger than your stomach!” That scenario comes to mind as I look at the impressive lineup of events at “The World’s Biggest Free Jazz Festival” that takes place from Friday, August 30th through Monday, Labor Day, September 2nd in Detroit. With all of this delicious music on the lineup how in the world can one person take in all that he or she wants? It’s a delightful dilemma for sure.

The 34th Detroit Jazz Festival begins on Friday evening with two grand performances on the huge Main Stage in the center of the beautiful old buildings of downtown Detroit. After the hard-working people of the Motor City finish the work week they, along with tens of thousands of their fellow jazz lovers from around the world, will gather to begin the celebration with a performance by this year’s “Artist In Residence,” Danilo Perez, who’ll perform with his quintet Panama 500. Following that, saxophonist David Murray leads his Big Band with vocalist Macy Gray to finish day one. As for other highlights for shows on the Main Stage there’s plenty for straight ahead fans with various big bands including those from Michigan State and The University of Michigan, tributes to Teddy Harris, Jr. and Stan Kenton, a “Saxophone Summit” featuring Joe Lovano, Dave Liebman and Ravi Coltrane and a massive salute to Dave Brubeck (one of four during the festival) with The Brubeck Brothers Quartet, a string orchestra and a 65 voice choir.

For those in search of music with a more modern approach the Main Stage will present a Saturday lineup that includes Charles Lloyd and Friends, featuring Bill Frisell in the first of his two performances at the festival. On Sunday there’s modern jazz superstars Yellowjackets (presenting a new lineup that features the son of Jaco, Felix Pastorius, on bass), grooving guitarist John Scofield with his Uberjam Band and new vocal sensation Gregory Porter. On Monday one can hear the blend of hip hop & jazz with Grammy-winner Robert Glasper and what should be a wonderful all-star celebration of Miles Smiles with Wallace Roney playing the part of Miles Davis alongside fellow stars like Larry Coryell and Alphonse Mouzon. As always, there will be a special emphasis on Detroit, it’s jazz legacy and featuring its great musicians. The Main Stage will feature The Robert Hurst Group on Saturday, and Mr. Hurst will be one of 7 Detroiters joining Geri Allen on stage for her “Homecoming Band” on Monday. Others include Dave McMurray, George Bohanon, Karriem Riggins, Shelia Jordan and J.D. Allen.

The Main Stage lineup would probably be enough to thrill the organizer of most any jazz festival in the world, but it’s time to cross Jefferson Street and enter Hart Plaza where three more stages will be filled with the stars of jazz for the Labor Day Weekend, and one of my favorite places ever to see a show is the sunken concrete amphitheatre called the Absopure Pyramid Stage. Next to the Detroit River and down some steep steps lies a stage that puts the artist and the audience literally face to face in an intimate setting. Highlights on the Pyramid Stage include Detroiter J.D. Allen leading his trio, Eddie Daniels & Roger Kellaway recreating their new project Duke At The Roadhouse, and organ groover Tony Monaco with guitarist Freed Haque on Saturday. On Sunday the lineup includes young vibes master Warren Wolf and a great quartet including pianist Benny Green, the duo of Dave Liebman and Richie Beirach, A Tribute To Don Byas featuring James Carter and that group of swinging all-star vets including Gary Bartz, Eddie Henderson, Billy Hart, George Cables, Billy Harper and David Weiss known as The Cookers. Monday the Pyramid Stage presents young piano sensation Aaron Diehl, followed by Terell Stafford, the legendary Lee Konitz and one of Detroit’s great players and leaders, Marcus Belgrave. It may be the smallest venue but the lineup is huge!

A short walk through Hart Plaza, passing by the beautiful fountain, great food stalls and various kiosks with enticing displays to peruse and items to purchase, will take you to the always relaxing and inviting Mack Avenue Waterfront Stage. It sits right on the beautiful Detroit River with Windsor, Ontario in view and shady trees overhead, creating a comfortable setting for more music at the Detroit Jazz Fest. This year the Waterfront Stage presents, among others, son of New Orleans Delfeayo Marsalis and his Octet as well as Detroiter George Bohanon in a duo with saxophonist Azar Lawrence on Saturday. Sunday’s lineup includes Joan Belgrave singing Dinah Washington, another salute to Dave Brubeck, Detroiter Karriem Riggins leading his own band and Ravi Coltrane’s Quartet to close out the day. Labor Day brings the legendary vocalist from that famous family, Freddy Cole, to the stage and a taste of “World Jazz” by the great Brazilian band Trio Da Paz with special guests like vibes master Joe Locke re-creating the magic of Antonio Carlos Jobim and Stan Getz.

The largest of the stages at the Detroit Jazz Festival is the massive Carhartt Amphitheater Stage where the lineup is equally massive. The stage, that faces the river with the beautiful Detroit skyline in the background, could accommodate two big bands at once without a problem and there will be plenty of that to thrill the crowd in the terraced seating in front of the stage. On Saturday that piano-playing family duo, Bill Charlap and Renee Rosnes, perform followed by what’s sure to be a rousing performance by the Mack Avenue SuperBand, the lineup of artists who record for the Detroit-based jazz record label. Danilo Perez will appear in that aggregation that will eventually give way to the Brubeck Brothers Quartet in another tribute to their legendary father who I last saw in performance in Detroit a year before his passing. As if that weren’t enough, another living legend will perform to close out Saturday, the great McCoy Tyner in a trio setting with special guest, Savion Glover, the famous dancer who has been known to join McCoy on stage in the recent past.

The Carhartt Amphitheater will host another great wonderful group of jazz stars on Sunday including Bill Frisell bringing his salute to John Lennon featuring Jenny Scheinman on violin, preceded by a 3-baritone salute to local hero and legend Pepper Adams. The Detroit Jazz Festival Orchestra will fill the stage next to play new arrangements of Dave Brubeck classics with surprise guest soloists. Then the very busy pianists, Danilo Perez and Geri Allen, perform in a duo followed by Alan Broadbent’s trio with vocalist Shelia Jordan and a string section. There may not be a better way to close out a day than with an incomparable artist who few would want to follow. That artist is legendary pianist Ahmad Jamal who will bring down the curtain on the Sunday lineup in Detroit.

Labor Day on the Carhartt Amphitheater Stage begins at Noon and ends at 8 PM with big bands and big names. The band Quest, Dave Liebman, Richie Bierach, Ron McClure and Billy Hart, that began working together over 40 years ago, will continue their investigation of where bebop might have gone in the early afternoon, followed by the big sound of the Detroit Jazz Festival Orchestra taking on the big challenge of the music of Duke Ellington with special guests. Another big band, this one from Wayne State University, will join Danilo Perez for one last blast as they present his Panama Suite with more special guests. To close out the day’s activities Joshua Redman will present music from his latest release, Walking Shadows, with his quartet and strings. The 34th Detroit Jazz Festival promises to be a tasty smorgasbord of treats for any palate no matter what style of jazz activates your appetite. One thing is for sure. No one goes home hungry from Detroit and this is one time over-eating is encouraged!

Like so many jazz festivals this year, New York’s avant-garde Vision Festival was canceled due to the pandemic. But its organizers, Arts for Art, didn’t … END_OF_DOCUMENT_TOKEN_TO_BE_REPLACED

As previously reported in JazzTimes, the National Endowment for the Arts, in collaboration with SFJAZZ, is hosting a special online-only concert on Thursday, August 20, … END_OF_DOCUMENT_TOKEN_TO_BE_REPLACED

UPDATE 4/10/20 1:55 PM: The listening session will only happen live on Zoom due to technical issues with Facebook. Thanks! As the old saying goes, … END_OF_DOCUMENT_TOKEN_TO_BE_REPLACED

Arts For Art (AFA), a New York City-based nonprofit organization for the promotion and advancement of avant-garde jazz, celebrates its 25th year of programming with … END_OF_DOCUMENT_TOKEN_TO_BE_REPLACED