Joe Randall had only just retired from his decades-long career as a chef and culinary instructor when a local businessman came to him with an idea: Was he interested in opening a jazz club and restaurant in the heart of Savannah, Ga.?

Randall, a longtime resident of Savannah, has always loved jazz. He grew up in Harrisburg, Pa., where he saw Jimmy McGriff, Richard “Groove” Holmes, and other heavyweights perform at a popular club called Lawson’s Hotel. But Randall, who is 73 and recently wrapped up a 17-year run as the leader of his own local cooking school, had never operated a club. When the offer presented itself, it seemed like a good chance to combine two lifelong passions: jazz and food.

Now a little more than two years into its run, Good Times Jazz Bar & Restaurant, on West Broughton St., is a welcome hub for local players. Though Savannah has a flourishing arts scene thanks in part to its College of Art and Design, opportunities for jazz musicians are scarce.

“It’s pretty much dead,” Randall lamented to me in a recent phone interview, adding that his biggest goal with Good Times is to help reinvigorate the scene. “I’m really excited, number one, to keep the legacy alive of all the jazz musicians that came out of Savannah,” he said, mentioning saxophonist James Moody and bassist Ben Tucker.

Good Times, a three-story club with live music on the spacious bottom floor, is owned by Stephen Moore and his wife Danielle. Moore too felt the city’s jazz scene was lacking despite an annual festival and a number of capable musicians who live in the city.

“We’ve got a lot of local talented voices,” Randall said, naming Huxsie Scott and Cynthia Utterbach, both of whom are vocalists.

Randall takes as much pride in the music as he does in the menu, which includes regional specialties such as black grouper, red snapper, oysters, and shrimp. “I committed my name, my reputation,” he told me. “We opened the door being known for food. I lived in Baltimore, so when I put a crab cake on the menu, it’s a real crab cake.”

A local trombonist named Teddy Adams, who is a member of the Savannah Jazz Hall of Fame, helps Randall book the shows. Nationally known musicians like Jason Marsalis, Wycliffe Gordon, and Freddy Cole have performed at Good Times, but for the most part the club presents local acts along with those from nearby cities like Atlanta, Jacksonville, Orlando, and St. Augustine. Every Sunday, Adams sits in with the house band: Eric Jones on piano, Marc Chesanow on bass, and Robert Saunders on drums.

In the summer of 2018, I was passing through Savannah and decided to stop in at Good Times. I didn’t know then that the club hadn’t even been open a year, but I wouldn’t have been able to guess anyway. Everything about it suggested that it had been around for much longer. The crowd was convivial, engaged and enthusiastic. It seemed as if many were regulars. The jam session was loose but energetic and impressive to watch.

It was, I couldn’t help but think, a scene unto itself.

Nashville isn’t a city that most people would immediately associate with jazz. Until recently, the world’s country music capital didn’t have a single jazz club. … END_OF_DOCUMENT_TOKEN_TO_BE_REPLACED

In the space of less than two months, the COVID-19 pandemic transformed our world—and completely altered the lives (and, in many cases, the livelihoods) of … END_OF_DOCUMENT_TOKEN_TO_BE_REPLACED

During the COVID-19 pandemic, many organizations, festivals, and venues are either presenting concerts from home or offering videos of past performances. And some are hosting … END_OF_DOCUMENT_TOKEN_TO_BE_REPLACED 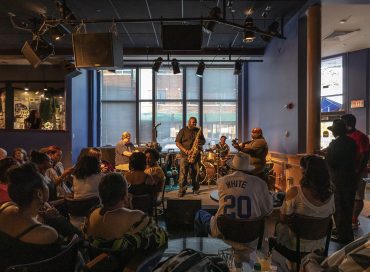 The Kansas City jazz scene was one of the country’s most vibrant hubs of blues and improvisation, home to such pioneers as Jay McShann, Bennie … END_OF_DOCUMENT_TOKEN_TO_BE_REPLACED