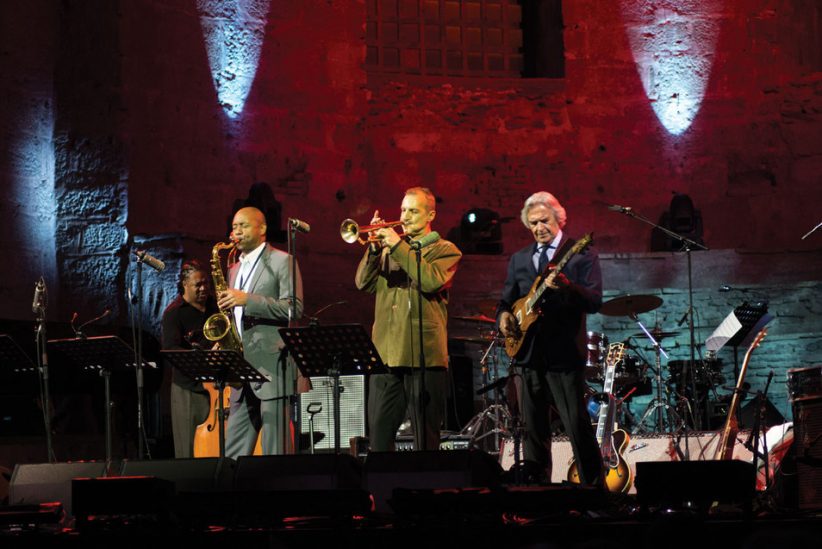 There is, it seems, one thing that the nations of the world can agree upon: jazz. When the second annual International Jazz Day took place on April 30, nearly all of the 195 member states of UNESCO (United Nations Educational, Scientific and Cultural Organization)-from Afghanistan to Zimbabwe-held events to rejoice in the music that, according to a speech given by Dr. Martin Luther King Jr., “speaks for life.”

The son of Dr. King, Martin Luther King III, referenced that speech in his own at this year’s flagship International Jazz Day event, an all-star concert and goodwill celebration staged at the Hagia Irene, the first church erected in what is today Istanbul, the largest city in Turkey. Begun in the fourth century, Hagia Irene is a cavernous, breathtakingly imposing structure that is often utilized for live music presentations. As a setting for promoting and presenting contemporary jazz, it proved a brilliant-if at times sonically lacking-choice.

King, along with Herbie Hancock, a UNESCO Goodwill Ambassador and Chairman of the Thelonious Monk Institute of Jazz, one of the co-sponsors of IJD, was in Istanbul to promote this music as a force of global unity. So too were dozens of musicians, 40 of whom, from 15 countries, performed at Hagia Irene on the evening of the 30th, their music streamed to millions around the world.

That concert was the main course but it was also a culmination. In the days preceding it, jazz professionals, political and business dignitaries, musicians, media and educators from around the world blanketed the city, presenting workshops, lectures, Q&As and more. On the morning of the 30th, at the Galatasaray High School, attentive, appreciative students took in an intimate performance featuring Hancock and Wayne Shorter sitting in with Monk Institute students. In virtually every other country, from Rwanda to Malaysia to Poland, concerts, lectures, film screenings and other events boosted the profile of jazz for at least part of one 24-hour period.

As is often the case at such multi-artist events, some pairings were more inspired than others; a handful stood out, others underwhelmed. Some artists played on a single tune and were gone; others returned several times. The sound, unfortunately, was frequently problematic: Although the vocalists could be heard clearly, the rhythm sections were often lost in the mix or given to murk. In the end, though, that didn’t matter: It was understood that this wasn’t so much about delivering flawlessness as it was about the revelry.

In that spirit, the first performance of the evening was devoted to the blues roots of jazz, with guitarist Joe Louis Walker, pianists Lewis and John Beasley (the evening’s musical director), bassist James Genus, drummer Colaiuta and British vocalist Joss Stone delivering a soulful if somewhat shrill “Some Kind of Wonderful.” The first true highlight arrived via Jarreau, whose vocalese turn on a medley of the Dave Brubeck Quartet’s “Take Five” and-this being Istanbul-“Blue Rondo à la Turk,” accompanied by Duke, Miller, Ritenour and Carrington, was riveting. (Make no mistake-this evening was geared toward the mainstream, not the music’s fringes.)

An all-cast finale, a take on Dizzy Gillespie’s “A Night in Tunisia” where Reeves improvised lyrics referencing International Jazz Day, may have been cacophonous, but it sure was fun to watch. Afterward, the audience had barely filed out the doors when the speculation regarding the possible locale of next year’s IJD began. Just the thought that it could be anywhere in the world-anywhere-was in itself a statement on how monumental this event has already become in two years.

As T.S. Monk said at a reception prior to the concert, “The foundations of jazz are not based in musical technique, they’re based in a philosophy that goes to the issue of humanity, communication, tolerance, teamwork, individuality. Those are things that are important to people everywhere and have been important to people since the beginning of time.”

The Kennedy Center in Washington, D.C. has just announced its 2022-2023 jazz season, which opens on October 16 with a special performance in the Concert … END_OF_DOCUMENT_TOKEN_TO_BE_REPLACED

The Hyde Park Jazz Festival has announced the lineup for its Sept. 24-25 event, with more than 30 performances to take place at various venues … END_OF_DOCUMENT_TOKEN_TO_BE_REPLACED

The Django Festival Allstars return for their annual run at the Birdland jazz club in New York City from July 12-17. The six nights of … END_OF_DOCUMENT_TOKEN_TO_BE_REPLACED

Running a music venue was never one of Jimmy Greenfield’s life goals. A sculptor by trade, the 67-year-old Greenfield has had a long and deep … END_OF_DOCUMENT_TOKEN_TO_BE_REPLACED