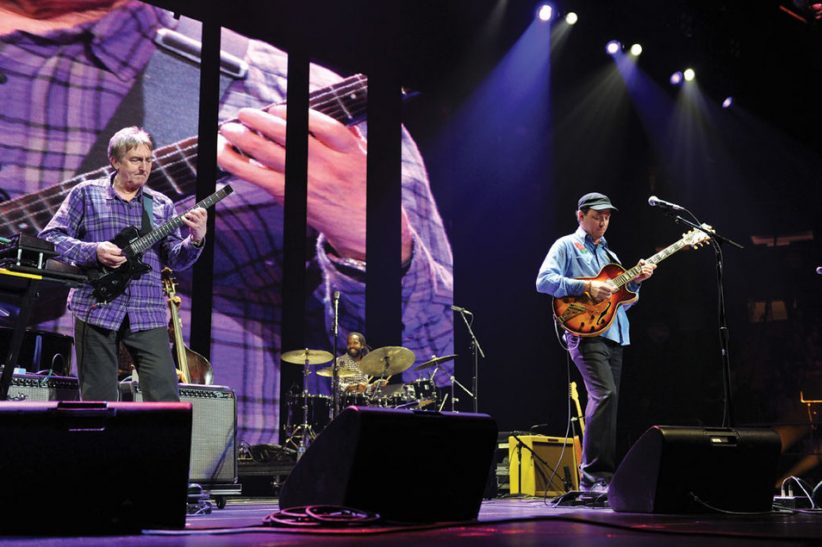 When John Mayer and Keith Urban are afforded 25 minutes of a concert that stretches toward five hours, you know the rest of the lineup must be serious. Such was the case at the 2013 Crossroads Guitar Festival, the sort of star-saturated live-music experience that allows its attendees long-term bragging rights.

Actually, Crossroads wasn’t so much a festival as two very long shows held on April 12 and 13 at Madison Square Garden in New York City. Founded in 2004 by Eric Clapton as a benefit for his Crossroads rehab facility in Antigua, the event has been held every three years, first in Texas and then twice in Illinois. Clapton curates the concerts, granting them a predictable lean toward baby-boomer blues, rock and soul. But there were aberrations, including some honest-to-God jazz.

Harmonic knowhow arrived by way of Earl Klugh, Kurt Rosenwinkel and Allan Holdsworth about two hours in on the 12th, and served overall as both a reprieve and a non sequitur. Klugh sounded as lithe and melodic as ever in a 10-minute set that included “(A Rhyme) This Time,” a song he co-wrote with Al Jarreau. Next up was Rosenwinkel, with a quintet featuring keyboardist Aaron Parks. He eased in via his glassy waltz “Heavenly Bodies” and continued with “Gamma Band” featuring guest Holdsworth. Following some tech difficulties, Rosenwinkel’s 25-minute allotment really seemed to catch fire.: Holdsworth opened “Gamma” with a trademark legato solo before forming a frontline with Rosenwinkel on the thrusting piece, which blended jazz-rock and the brand of 21st-century postbop Rosenwinkel defines.

Holdsworth left and Clapton appeared, for a vocal read of “If I Should Lose You” punctuated by Rosenwinkel’s eerie, evocative fills. They closed with “Big Road Blues,” during which Clapton’s Chicago-derived licks offered a fascinating contrast to Rosenwinkel’s frictionless, linear approach to a customary blues shuffle. Throughout, the audience reined in its barroom demeanor: Some folks chatted and headed toward the bathrooms, others homed in for a focused listen before more blues-rock.

The Montclair Jazz Festival, produced by the Jazz House Kids organization and presented by BDP Holdings, has announced the lineup for its Downtown Jamboree, a … END_OF_DOCUMENT_TOKEN_TO_BE_REPLACED

“We like to bring music to Cleveland in the spirit of the great and incredible and wonderful Albert Ayler. Let’s get a round of applause … END_OF_DOCUMENT_TOKEN_TO_BE_REPLACED

The Kennedy Center in Washington, D.C. has just announced its 2022-2023 jazz season, which opens on October 16 with a special performance in the Concert … END_OF_DOCUMENT_TOKEN_TO_BE_REPLACED

The Hyde Park Jazz Festival has announced the lineup for its Sept. 24-25 event, with more than 30 performances to take place at various venues … END_OF_DOCUMENT_TOKEN_TO_BE_REPLACED