Skip to content
Become a member and get exclusive access to articles, live sessions and more!
Start Your Free Trial
Home > Features > World on a String: Sinatra @100 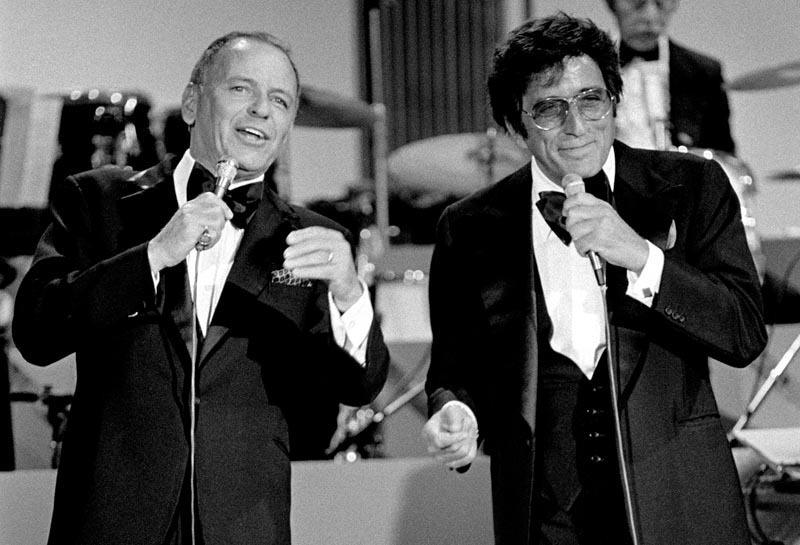 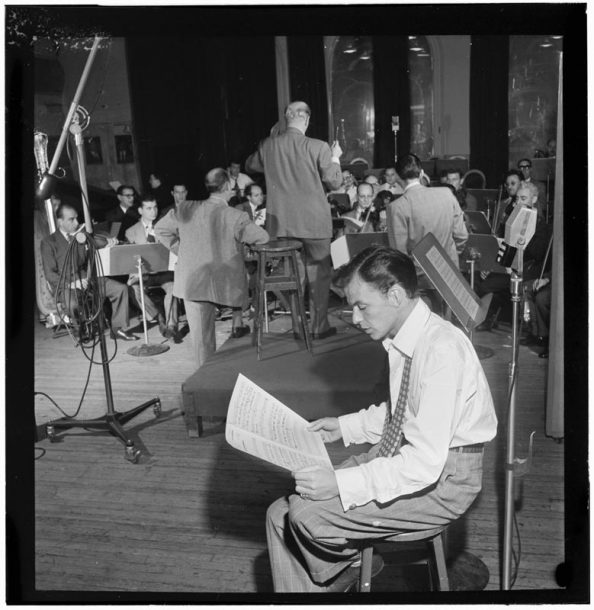 Frank Sinatra, recording for Columbia Records in 1947 in NYC 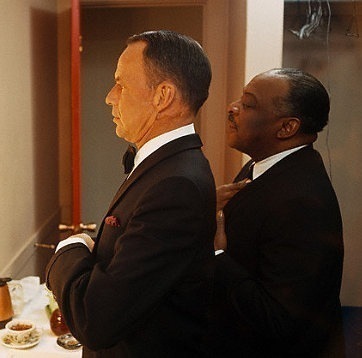 “Cent’anni.” Frank Sinatra’s favorite toast. “May you live 100 years.” Sinatra, born Dec. 12, 1915, only made it to 82. But, in this, the year of his centenary, his music remains as vital and influential as ever. As early as the 1940s, major jazz artists began recognizing him as a touchstone and teacher. According to author and critic Nat Hentoff, Lester Young “never played a ballad without first learning the lyrics. I asked him his source for the lyrics. Pointing to a stack of recordings near his chair, he said, ‘Frank Sinatra.'” Miles Davis, adds Hentoff, “told me the same thing. He learned to get inside the ballads from Frank Sinatra.” In a 1956 survey conducted by Leonard Feather for that year’s edition of the Encyclopedia Yearbook of Jazz, nearly half of the 120 musicians polled named Sinatra as their all-time favorite vocalist-players including Duke Ellington, Stan Getz, Oscar Peterson, Bud Powell, Gerry Mulligan, Horace Silver, Cal Tjader and, again, Young and Davis.

Kurt Elling, currently touring with the finely tailored homage “Elling Swings Sinatra,” is usually more strongly linked to Mark Murphy. But, he says, “I have certainly studied and adopted certain habits of his craft. I’d be a fool not to. Sinatra sets a great example both in stagecraft and in the natural and emotional delivery of American song.” John Pizzarelli, who paid album-length tribute with Dear Mr. Sinatra in 2006, recalls growing up in New Jersey to the “ubiquitous sound of Sinatra in our house. When I was in my 20s, I’d go back to my apartment at night and put on In the Wee Small Hours of the Morning and think, ‘What is it about this record?’ Every time you put it on you find something new.”

Michael Feinstein has twice celebrated Sinatra’s musical sensibilities, with 2008’s The Sinatra Project and, from 2011, the companion Volume II. Feinstein, arguably the world’s foremost authority on the Great American Songbook and its practitioners, avers that “Sinatra absolutely reinvented the way the American popular song is heard. … He created, or at least crystallized, a new way to hear these songs that is pretty much the way most people want to hear them now.”

Further afield, Sinatra has been cited as an important influence by such disparate artists as Bono, who devoted a New York Times op-ed piece to the topic in 2009, Bob Dylan and Bruce Springsteen, both of whom performed on the televised celebration Sinatra: 80 Years My Way in 1995. (Dylan’s new Columbia album, Shadows in the Night, is composed entirely of standards previously recorded by Sinatra.) “Hail, brother, you sang out our soul,” said Springsteen, dedicating his rendition of “Angel Eyes” to Ol’ Blue Eyes.

And, of course, a direct line can be drawn from Sinatra to Bobby Darin, who modeled his brassy persona on his hero. More recently, Harry Connick Jr., Michael Bublé, Jamie Cullum and Tony DeSare can be classified as Sinatra acolytes, particularly in the early phases of their careers. And strong echoes of Sinatra are evident in the ice-coolness of Sachal Vasandani and the intensely personal balladry of Andy Bey.

Why does Sinatra’s sound endure? It’s complicated, primarily because of the near-impossibility of separating the music from his larger-than-life mystique: the booze-fueled bacchanals; the jet-setting antics; the sophomorically charming Rat Pack camaraderie; the murky trails of mob-connected danger. From career onset he remained a remarkable mélange of paradoxes: a loner who couldn’t stand being alone; a womanizer who revered women; a quick-fisted bully whose munificence, usually unheralded, was immense; an egomaniac capable of tremendous selflessness.

Most critical, and compelling, are the antimonies within the music itself. First, that the dreamy-eyed, almost fragile Sinatra of the 1940s is an entirely different singer, both tonally and stylistically, than the red-blooded, cocksure one who emerged in the 1950s. Second, and more important, is the sharply dichotomous nature of his material from the 1950s onward, with his unique mastery of emotional extremes. In one of his most famous quotes, Sinatra described himself as an “18-carat manic-depressive. And having lived a life of violent emotional contradictions, I have an over-acute capacity for sadness as well as elation.” Place “I’m a Fool to Want You” aside “Come Fly With Me” and his skill at navigating both poles is immediately obvious.

To read the rest of this story, purchase the issue in print or via the iTunes newsstand. Print and digital subscriptions are also available.

Meghan Stabile, an innovative jazz promoter, producer, organizer, curator, and advocate who proudly adopted the New York Times’ description of her as a “modern impresario,” … END_OF_DOCUMENT_TOKEN_TO_BE_REPLACED

Grachan Moncur III, a trombonist and composer who forged a unique identity in the “new thing” of 1960s jazz, died in his longtime home city … END_OF_DOCUMENT_TOKEN_TO_BE_REPLACED

Charnett Moffett, a bassist and composer whose virtuosity on both electric (often fretless) and acoustic instruments was matched by his versatility, died April 11 at … END_OF_DOCUMENT_TOKEN_TO_BE_REPLACED

Ron Miles, a cornetist, composer, and educator who became a revered and innovative figure in jazz while maintaining a career in the far-flung state of … END_OF_DOCUMENT_TOKEN_TO_BE_REPLACED