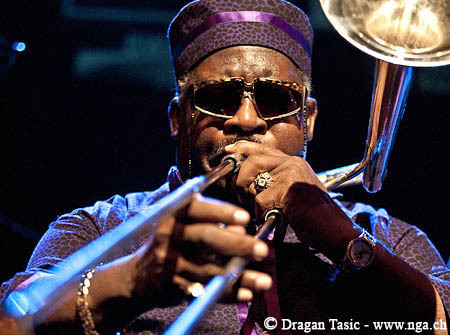 Trombonist Wayne Henderson, a core member of the Jazz Crusaders-later shortened to the Crusaders-along with Joe Sample (piano), Stix Hooper (drums) and Wilton Felder (saxophone), died in Culver City, Calif., on April 4 of heart failure. He was 74.

Henderson was an important player in jazz, soul and funk, and also an accomplished producer. His peak years of popularity came during the 1970s, but by that time he had already been active for two decades; he continued to record and perform with a revived Crusaders including, at times, Felder and Sample into the 2000s.

Wayne Maurice Henderson was born Sept. 24, 1939, in Houston, Tex. He began studying trombone in the sixth grade. The roots of the Crusaders stretch back to 1952 when Hooper and Felder formed a group in Texas called the Swingsters. Henderson, who was still in his teens, and Sample joined about a year later. Other members, including, for a brief while, flutist Hubert Laws, came and went, and in 1958 the quartet relocated to L.A. They changed the name of the group to the Jazz Crusaders in 1961 and recorded Freedom Sound, the first of 16 albums for the World Pacific label, that year. Subsequent albums were released on the Liberty, MoWest and Chisa labels. In 1971, the group shortened its name to the Crusaders, became more funk-oriented and released a string of chart albums on Blue Thumb Records and, later MCA, peaking in 1979 with Street Life, four years after Henderson’s departure.

Henderson released his first solo albums as a leader, People Get Ready and Soul Sound System, both in the late ’60s. Those were followed by several others in the ’70 and into the ’90s for ABC and Polydor (including collaborative efforts with Roy Ayers). He also moved into production, forming his own At-Home Productions and producing albums for Monk Montgomery, Ronnie Laws, Gabor Szabo and others. Other artists with which Henderson worked, either as producer or accompanist, included Patti Austin, Bill Withers, Ramsey Lewis, Steely Dan, Hiroshima, Marvin Gaye, B.B. King and the Jackson Five; Henderson and Michael Jackson co-produced Rebbie Jackson’s Centipede.

In 1995, Henderson revived the Crusaders, with both Sample and Felder involved at various times, although the full original quartet never reunited.

Meghan Stabile, an innovative jazz promoter, producer, organizer, curator, and advocate who proudly adopted the New York Times’ description of her as a “modern impresario,” … END_OF_DOCUMENT_TOKEN_TO_BE_REPLACED

Grachan Moncur III, a trombonist and composer who forged a unique identity in the “new thing” of 1960s jazz, died in his longtime home city … END_OF_DOCUMENT_TOKEN_TO_BE_REPLACED

Charnett Moffett, a bassist and composer whose virtuosity on both electric (often fretless) and acoustic instruments was matched by his versatility, died April 11 at … END_OF_DOCUMENT_TOKEN_TO_BE_REPLACED

Ron Miles, a cornetist, composer, and educator who became a revered and innovative figure in jazz while maintaining a career in the far-flung state of … END_OF_DOCUMENT_TOKEN_TO_BE_REPLACED