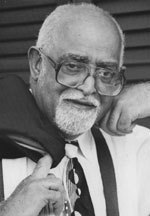 Wardell Quezergue, a highly regarded New Orleans bandleader, arranger and producer who contributed to numerous rhythm and blues hits, died August 30 in Metairie, La. He was 81 and the cause was congestive heart failure.

The recipient of an honorary doctorate from Loyola University, Quezergue, who learned to play trumpet at age 12, began producing recordings in the 1950s and led a band called Wardell and the Sultans. He also co-founded a label called Nola Records. Many of his greatest successes were for the Jackson, Miss.-based Malaco Records. His composition “It Ain’t My Fault” has been sampled by several rappers.

A 2009 tribute concert in Lincoln Center featured Dr. John and other artists who worked with Quezergue.

Meghan Stabile, an innovative jazz promoter, producer, organizer, curator, and advocate who proudly adopted the New York Times’ description of her as a “modern impresario,” … END_OF_DOCUMENT_TOKEN_TO_BE_REPLACED

Grachan Moncur III, a trombonist and composer who forged a unique identity in the “new thing” of 1960s jazz, died in his longtime home city … END_OF_DOCUMENT_TOKEN_TO_BE_REPLACED

Charnett Moffett, a bassist and composer whose virtuosity on both electric (often fretless) and acoustic instruments was matched by his versatility, died April 11 at … END_OF_DOCUMENT_TOKEN_TO_BE_REPLACED

Ron Miles, a cornetist, composer, and educator who became a revered and innovative figure in jazz while maintaining a career in the far-flung state of … END_OF_DOCUMENT_TOKEN_TO_BE_REPLACED