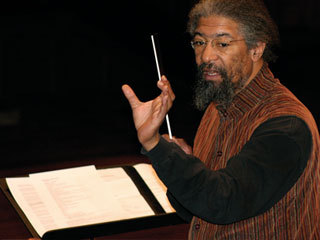 In July 2002 Butch Morris called me out of the blue and asked if I would be willing and able to participate in a series of concerts at the Bowery Poetry Club. Several months earlier I had become familiar with Butch’s work through separate discussions with my friends and colleagues Michele Rosewoman and Vijay Iyer. As I walked through the front door of the club for what would be my first creative orchestral performance, I didn’t realize I was about to embark on a journey that would forever change my life as a composer and performer.

For that first edition of New York Skyscraper, Butch welcomed me with open arms. Following the performance, he told me, “Whenever you want the gig, you got it!” Every night thereafter, Butch taught me a great deal about the necessity to commit to the moment at all times; he also taught me to always make compositional decisions, whether reading a score, responding to his “Conduction” cues-his trademarked term meaning “conducted improvisation”-or performing free improvisations. I found in him not only a generous, kind mentor but also a musical kindred spirit.

At that time, Butch was among a handful of people whom I felt really encouraged me to pursue and develop my compositional interests, to cultivate an audience that would become receptive to my ideas, and to create music that I believe in and that is authentic to my musical and life experiences. As Butch advised me following a gig, “I mean, you gotta live what you play, man!”

Butch was the second musician to invite me to perform in Europe. In September 2003, Butch, myself and the rest of the New York/Sheng Skyscraper ensemble set off for Venice to appear at the 47th Music Biennale Festival. The piece called for a creative orchestra comprising African and Asian performers of traditional musics, as well as players from New York. Our performance of this work blew me away: Butch’s mastery of spontaneous composition led me to entirely new musical realms. That Butch was able to create a trans-idiomatic music, simultaneously embracing and altering a wide range of musical traditions, led me to the understanding that music is a direct language that can be communicated and developed with anyone, from anywhere, at any time.

I went on to perform regularly with Butch from 2003 to 2008. We performed several editions of New York Skyscraper and New York/Sheng Skyscraper, featuring a rotating cast of soloists, such as Graham Haynes, J.A. Deane and Elliott Sharp. I participated in various Conduction workshops that Butch led in the New York clubs the Stone, Jazz Gallery and Nublu. Nowadays, I teach seminars on Conduction and similar methodologies in Europe.

It is inadequate to simply say that Butch Morris employed the baton as his musical instrument, signaling performers to play specific gestures or to follow another ensemble member’s musical inclinations. His musical innovations challenged the age-old ternaries concerning composition, performance and improvisation. Conduction not only encompassed written music, ranging from his own compositions to Mozart’s orchestral works, but also the beauty in bringing together musicians from seemingly divergent worlds to create a singular expression. My involvement in Butch’s ensembles remains one of the greatest, most transformative accomplishments in my creative development. His lasting influence not only celebrates the idea of performing in multiple musical communities, but reimagines and redefines the idea of community itself.

The following is an official statement from the family of the late Elvin Jones, received at the JazzTimes office earlier today, December 14. The family … END_OF_DOCUMENT_TOKEN_TO_BE_REPLACED

David Ornette Cherry, a multi-instrumentalist, composer, and poet who worked to merge the jazz tradition with classical and various African and world music traditions, died … END_OF_DOCUMENT_TOKEN_TO_BE_REPLACED

Mick Goodrick, a guitarist and teacher who was arguably the most influential guitar pedagogue in the history of jazz, died November 16 at his home … END_OF_DOCUMENT_TOKEN_TO_BE_REPLACED

Terry Woodson, a trombonist, arranger, librarian, copyist, conductor, and record producer, passed away on October 19. A graduate of the University of Tulsa, he joined … END_OF_DOCUMENT_TOKEN_TO_BE_REPLACED