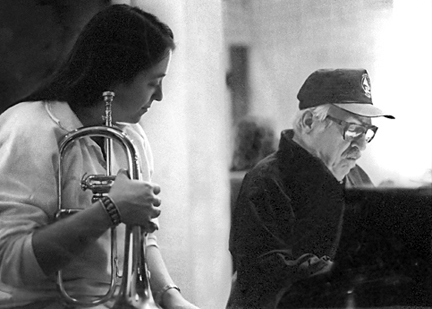 Stacy Rowles, a trumpet-flugelhorn player and occasional vocalist based in Southern California, died on October 30, 2009. She was just 54 year old. Ms. Rowles was seriously injured in a car accident two weeks ago.

Rowles, daughter of the pianist Jimmy Rowles, grew up with jazz and first performed at a teenager with her father at the Monterey Jazz Festival. She also appeared on a few of his recordings. She went on to a long career of her own as a member of Ann Patterson’s Maiden Voyage band as well as The Jazz Birds, which was a small-group offshoot of that band. She also performed with the Clayton-Hamilton Jazz Orchestra and other Los Angeles-based jazz groups. Her CD, Tell It Like It Is was released by Concord Jazz in 1984. Ms. Rowles appeared periodically on the jazz cruise and jazz party circuits. She was noted for her melodic and lyrical tone on flugelhorn.

Here is a statement from her web site:

“Stacy Rowles had the great good fortune to have a parent, pianist Jimmy Rowles, who was one of the Southland’s most admired jazz artists. More than that, she had the opportunity to share his music and the wisdom to receive his knowledge. Jimmy Rowles probably didn’t anticipate that his daughter would choose to become one of the rare female trumpet-fluegelhorn players. But their performances together afforded rare and memorable jazz pleasures. Rowles’ fluegelhorn playing, even more than her trumpet work, combines a warm, often sensuous sound with briskly swinging, melodically based improvisations. Although she is better known as an instrumentalist, her warm-toned vocals move confidently from sweetly intimate balladry to in-the-pocket, swinging grooves. And watching Stacy Rowles in action, masterfully displaying her craft, one could easily imagine Jimmy Rowles, somewhere, listening to the set and smiling proudly.”

Meghan Stabile, an innovative jazz promoter, producer, organizer, curator, and advocate who proudly adopted the New York Times’ description of her as a “modern impresario,” … END_OF_DOCUMENT_TOKEN_TO_BE_REPLACED

Grachan Moncur III, a trombonist and composer who forged a unique identity in the “new thing” of 1960s jazz, died in his longtime home city … END_OF_DOCUMENT_TOKEN_TO_BE_REPLACED

Charnett Moffett, a bassist and composer whose virtuosity on both electric (often fretless) and acoustic instruments was matched by his versatility, died April 11 at … END_OF_DOCUMENT_TOKEN_TO_BE_REPLACED

Ron Miles, a cornetist, composer, and educator who became a revered and innovative figure in jazz while maintaining a career in the far-flung state of … END_OF_DOCUMENT_TOKEN_TO_BE_REPLACED