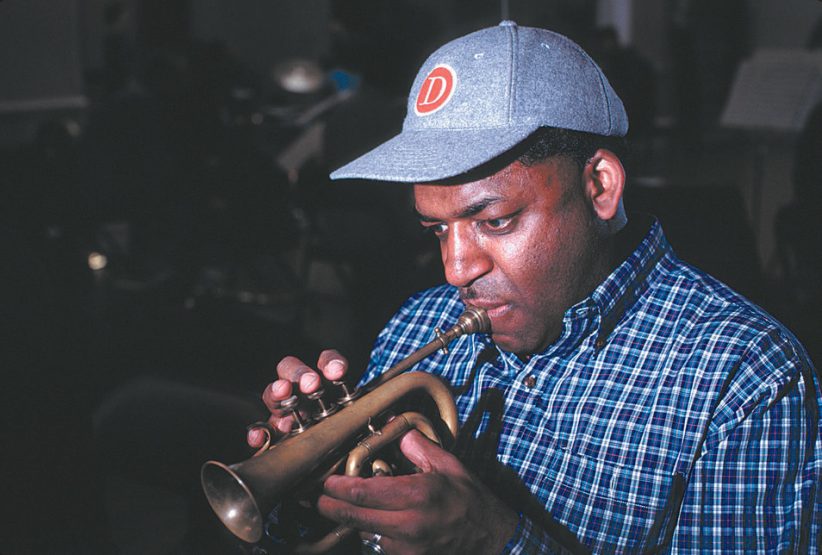 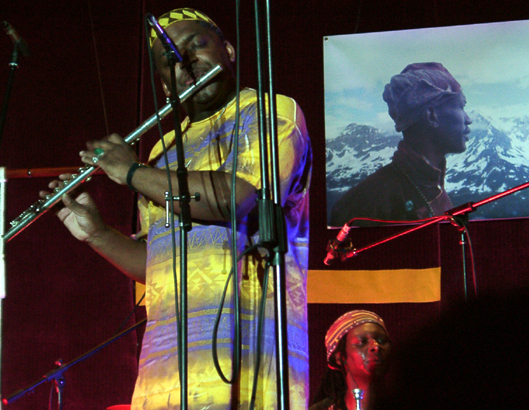 Roy Campbell (l.) with Hamid Drake. Don Cherry is on the projection screen.

Trumpeter Roy Campbell Jr., whose versatility found him playing first with big bands, graduating to bebop and ultimately becoming a favored player among free jazz aficionados, died Jan. 9, according to multiple reports on social media sites. The cause and place of death were not reported. Campbell was 61.

Performing as a leader or with artists including Don Cherry, Matthew Shipp, Hamid Drake, William Parker and Peter Brötzmann, Campbell was praised for his adventurous approach and incorporation of numerous strains of music into his own, including world music, hip-hop and reggae.

Born in Los Angeles in 1952, Campbell’s family moved to New York when he was 2. He learned piano and violin irst while in high school, but by the early 1970s he had switched to trumpet (he also played flugelhorn and flute). Taught by Lee Morgan, Kenny Dorham, Joe Newman, Yusef Lateef and others, Campbell played sessions with Jazzmobile, a nonprofit organization dedicated to furthering the reach of jazz into local communities. Campbell majored in trumpet at Manhattan Community College, but by the time he graduated in 1975 he was already leading his own band, Spectrum, and serving as a sideman. In 1978, he joined Ensemble Muntu, a group led by bassist William Parker.

Campbell’s first album as a leader was New Kingdom, on the Delmark label, in 1991. He was 39 at the time. His 2001 release Ethnic Stew and Brew was chosen as the number three album of the year by JazzTimes critics.

Campbell was named a “Harlem Unsung Hero” in 2003. He was also an actor, appearing in several plays and films, and scored music for film, theater and television.

Meghan Stabile, an innovative jazz promoter, producer, organizer, curator, and advocate who proudly adopted the New York Times’ description of her as a “modern impresario,” … END_OF_DOCUMENT_TOKEN_TO_BE_REPLACED

Grachan Moncur III, a trombonist and composer who forged a unique identity in the “new thing” of 1960s jazz, died in his longtime home city … END_OF_DOCUMENT_TOKEN_TO_BE_REPLACED

Charnett Moffett, a bassist and composer whose virtuosity on both electric (often fretless) and acoustic instruments was matched by his versatility, died April 11 at … END_OF_DOCUMENT_TOKEN_TO_BE_REPLACED

Ron Miles, a cornetist, composer, and educator who became a revered and innovative figure in jazz while maintaining a career in the far-flung state of … END_OF_DOCUMENT_TOKEN_TO_BE_REPLACED