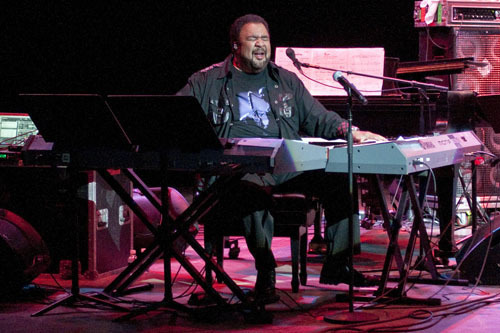 I loved George Duke as a brother. I had the highest respect for him as a man and a musician and feel forever fortunate to have had him as a friend for more than 40 years. He was brilliant and epitomized a great combination of science and soul. His accomplishments are astounding. I cherish my memories of George and I’m grateful he played such a large part in my life and career.

George and I first met in Finland in 1971, at the hotel we were staying at for the Pori Jazz festival. We walked out of our rooms at the same time. It was obvious we both were aware of each other, but we’d never met. George was wearing a big dashiki-Afrocentric before its time. We both had huge Afros, and I mean enormous. George introduced himself, and with our massive Afros we had to negotiate the narrow European hotel hallway.

George was playing with Cannonball Adderley at the time, and I was there with Chick Corea. It was common for all the young musicians to get together for a late-night jam. That sealed the deal for our friendship. We agreed to stay in touch, and collaboration was in the works.

When back in the States, I called him to play on Journey to Love, then he asked me to perform on his current album. From that time on, we made an agreement to play often on each other’s records, as an even exchange with no payment. It was a beautiful sign of our brotherhood.

Socially, we made it a tradition to spend New Year’s Eve together with our wives. We would usually go out to a club and enjoy someone entertaining us for a change. We kept this up religiously for 10 years, then whenever we could.

George and I both lived in the Los Angeles area, so when we were in town at the same time, we would often drop in on each other just to hang out. George had a wonderful studio at his house. He was in high demand as a producer, and produced records for Miles Davis, Al Jarreau, Dionne Warwick, Dianne Reeves, Sister Sledge, A Taste of Honey, Jeffrey Osborne, Gladys Knight, Smokey Robinson, Take 6, Natalie Cole, Tower of Power, Flora Purim,

Milton Nascimento and Airto Moreira, among so, so many others.

I always admired George’s sophisticated musicality. Few had the ability to walk through so many different genres as he did-R&B, jazz, pop, rock, classical. He knew all well and didn’t have any weaknesses. Incredibly, he understood how to weave these all together, which is what artists recognized him for and came to him for. He had an ability to define a sound for an artist by masterfully mixing the genres into something unique. George respected all types of musicians and they respected him.

He was a producer’s producer but also an instrumentalist. He could have made a great name for himself just as a piano player or composer. I didn’t realize until much later all of the compositions he wrote for other artists that became hits. He also scored films and composed and produced songs for films like The Five Heartbeats, The Apostle and Spaceballs, to name a few. He wrote and produced tracks for movies including Footloose and Poetic Justice (with me). And he was a music director for a number of specials such as the Soul Train Music Awards (11 years), HBO Comic Relief and Nelson Mandela: An International Tribute for a Free South Africa in 1990.

One of the many things we had in common was our concern regarding music education. He was an educator, a professor of music in fact, and staunchly promoted the importance of music education in schools. He made himself available to participate in jams at my Stanley Clarke Scholarship Award events.

George was unusually kind for someone who worked so hard. He was like a little Buddha. Nothing really appeared to bother him. He was patient and high-toned in a professional setting. He always left anyone he dealt with feeling better. That is an incredible gift in itself.

I toured with George on and off throughout the years. The most fun I’ve had touring was with George. So often on a tour the comedy doesn’t live up to the music. In our case it did. One memorable example was a Halloween performance in 1981 at the Royal Oak Theatre in Detroit, when “Sweet Baby” [from The Clarke/Duke Project] was topping the charts. One thing people may not know about George is that he loved to collect masks-all kinds of masks, from African art pieces to superhero masks. To celebrate Halloween, we both decided to come out onstage wearing masks, thinking it would be incredibly funny. So we walked onstage in our white tuxedos and these ugly pig masks. The audience went completely silent-I mean deadly silent. This was the complete opposite of what we expected and really uncomfortable. Total backfire, until someone saved us with an intro announcement and we took off our masks.

In 2005 and 2012 we went on our most recent structured tours, the last being the Clarke/Duke 4: Bring It! Tour. We were both in the movement that spearheaded jazz fusion in the early ’70s, and were gratified that 40 years later there was longevity to that movement. We were thrilled to be able to go out and perform a style of music that we helped pioneer.

George left a huge footprint in our industry. He was a bright star with a unique skill set. When he passed away, it went away. But his music and accomplishments will live on.

Charnett Moffett, a bassist and composer whose virtuosity on both electric (often fretless) and acoustic instruments was matched by his versatility, died April 11 at … END_OF_DOCUMENT_TOKEN_TO_BE_REPLACED

Ron Miles, a cornetist, composer, and educator who became a revered and innovative figure in jazz while maintaining a career in the far-flung state of … END_OF_DOCUMENT_TOKEN_TO_BE_REPLACED

Ernie Andrews, a deep-voiced singer who scored a major hit (1945’s “Soothe Me”) when he was still in his teens but remained perennially underrecognized by … END_OF_DOCUMENT_TOKEN_TO_BE_REPLACED

I’ve been playing the organ since I was 10 years old because I love the sound of the Hammond B-3. Once I heard Jimmy Smith … END_OF_DOCUMENT_TOKEN_TO_BE_REPLACED