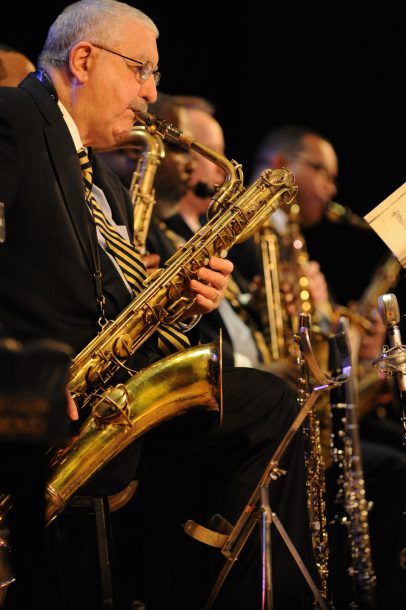 Joe Temperley, performing in the Jazz at Lincoln Center Orchestra

The acclaimed Scottish-born saxophonist Joe Temperley, a veteran of the Duke Ellington and Jazz at Lincoln Center Orchestras, died May 11 in New York City. The cause was complications related to gastrointestinal stromal tumors, according to a JALC rep. He was 86.

Temperley first broke through in London, as a member of British trumpeter and aristocrat Humphrey Lyttelton’s band from the late 1950s through the mid-’60s. He moved to New York City in 1965, and racked up an impressive list of credits in the ensuing decade, primarily as an invaluable low-end specialist; Temperley doubled on baritone saxophone and bass clarinet but could handle other woodwinds as well. He can be heard on Woody Herman and the Swingin’ Herd’s Woody Live East and West, recorded in 1967; Clark Terry’s hard-to-find Big B-A-D Band in Concert, which documents a 1970 residency at the Russian Tea Room in New York; the Thad Jones/Mel Lewis band’s Central Park North, from 1969; and several sessions with the Brazilian pianist-composer Eumir Deodato. His baritone sax even appears on a handful of James Brown singles dated 1972-73. Other performance and/or recording credits include Duke Pearson, Buddy Rich, the Gerry Mulligan Orchestra, Benny Carter, Buck Clayton, Anthony Wilson, Dick Hyman and Joe Henderson-a friend Temperley performed with many times and eventually recorded with for 1997’s Big Band. Of another friend, Eric Dolphy, Temperley once recalled in an interview: “I said, ‘How come you play like Charlie Parker at a jam session and you don’t play like that in public?’ And he said, ‘If I played like Charlie Parker in public, nobody would take any notice of me.'”

As a replacement for baritone virtuoso Harry Carney, who died in 1974, Temperley hit the road with the Duke Ellington Orchestra under the direction of Mercer Ellington, as the maestro had passed in May of ’74. Both Carney and Temperley are featured on the 1975 Ellington band LP Continuum.

In 1988, Temperley became an original member of what is now known as the Jazz at Lincoln Orchestra, and remained in the band for nearly three decades. (His role as a sonic and harmonic foundation could easily be compared to Carney’s place in the Ellington Orchestra.) “With Joe, there’s the sound, and the integrity in the sound, the originality of it. When you hear his sound, you know him automatically, because it’s so full of warmth, soul and feeling,” JALC Artistic Director Wynton Marsalis said in a press statement. “We would always have Joe play at or near the end of pieces because his sound carried the meaning of our music. For someone from another country and culture to exhibit the depth of belief that animated his sound was, and still is, truly miraculous. From the coal mines of Scotland to clubs and concert halls all over the world, Joe’s journey was epochal, and he did it with integrity, style, and piss and vinegar. We will miss him deeply and his spirit will forever live on in the sound of our orchestra.”

Last year, JALC dedicated a concert, entitled “Celebrating Joe Temperley: From Duke to the JLCO,” to the saxophonist. The institution also presented his small-group playing. He wasn’t widely recognized as a bandleader, but Temperley did deliver a string of resolutely swinging sessions for the HEP label through the 1990s and 2000s. As an educator, Temperley cofounded the FIFE Youth Jazz Orchestra in Scotland.

Meghan Stabile, an innovative jazz promoter, producer, organizer, curator, and advocate who proudly adopted the New York Times’ description of her as a “modern impresario,” … END_OF_DOCUMENT_TOKEN_TO_BE_REPLACED

Grachan Moncur III, a trombonist and composer who forged a unique identity in the “new thing” of 1960s jazz, died in his longtime home city … END_OF_DOCUMENT_TOKEN_TO_BE_REPLACED

Charnett Moffett, a bassist and composer whose virtuosity on both electric (often fretless) and acoustic instruments was matched by his versatility, died April 11 at … END_OF_DOCUMENT_TOKEN_TO_BE_REPLACED

Ron Miles, a cornetist, composer, and educator who became a revered and innovative figure in jazz while maintaining a career in the far-flung state of … END_OF_DOCUMENT_TOKEN_TO_BE_REPLACED