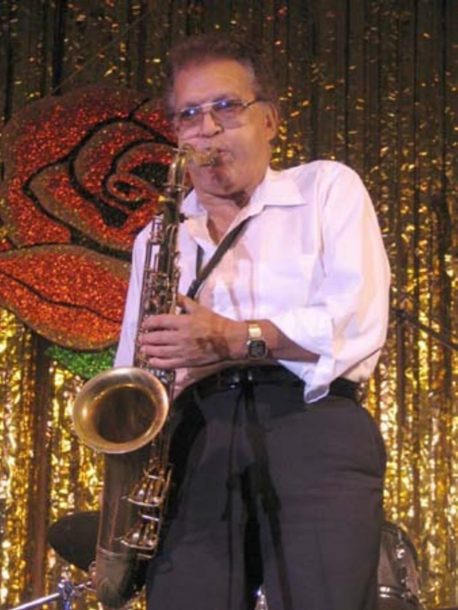 According to the bio on Bernal’s website, which confirms his death, Bernal was born in Los Angeles and became interested in jazz at a young age. He began playing tenor sax at parties and was eventually hired by Lionel Hampton. After performing with his own group for a while he worked with Spike Jones and then worked L.A. and Las Vegas with his own group.

According to Whiteside’s obituary, Bernal also played with such artists as Ray Charles and Quincy Jones and he was also heard on hit records of the 1950s and early ’60s by the Coasters, including “Youngblood,” “Smokey Joe’s Café” and “”Searchin’.” Another hit record to which he contributed was Duane Eddy’s smash instrumental “Rebel Rouser.” He mainly performed jazz throughout the rest of his life.

According to Whiteside, “He can also be heard on soundtracks like In the Heat of the Night and In Cold Blood, both collaborations with Quincy Jones. Distinguishing himself as one Los Angeles’ most in-demand and hardest working jazz players, more recently Bernal was drafted by Ry Cooder for work with both the Buena Vista Social Club and on Cooder’s star-studded Chavez Ravine.”

Meghan Stabile, an innovative jazz promoter, producer, organizer, curator, and advocate who proudly adopted the New York Times’ description of her as a “modern impresario,” … END_OF_DOCUMENT_TOKEN_TO_BE_REPLACED

Grachan Moncur III, a trombonist and composer who forged a unique identity in the “new thing” of 1960s jazz, died in his longtime home city … END_OF_DOCUMENT_TOKEN_TO_BE_REPLACED

Charnett Moffett, a bassist and composer whose virtuosity on both electric (often fretless) and acoustic instruments was matched by his versatility, died April 11 at … END_OF_DOCUMENT_TOKEN_TO_BE_REPLACED

Ron Miles, a cornetist, composer, and educator who became a revered and innovative figure in jazz while maintaining a career in the far-flung state of … END_OF_DOCUMENT_TOKEN_TO_BE_REPLACED