Skip to content
Become a member and get exclusive access to articles, live sessions and more!
Start Your Free Trial
Home > Features > Saxophonist and Educator Paul Jeffrey Dies at 81 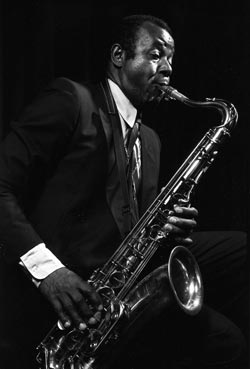 Saxophonist and composer Paul Jeffrey, who served as the director of jazz studies at North Carolina’s Duke University, died March 20 after a lengthy illness. He was 81, and his death was reported by local North Carolina news outlets.

Jeffrey was reportedly the last saxophonist to work with Thelonious Monk and was also known for working with Sonny Rollins, Charles Mingus and others. He began his directorship at Duke in 1983. He also served as artistic director of the Aspen Jazz Festival. A jazz school in Italy was created in his name in 2000.

Meghan Stabile, an innovative jazz promoter, producer, organizer, curator, and advocate who proudly adopted the New York Times’ description of her as a “modern impresario,” … END_OF_DOCUMENT_TOKEN_TO_BE_REPLACED

Grachan Moncur III, a trombonist and composer who forged a unique identity in the “new thing” of 1960s jazz, died in his longtime home city … END_OF_DOCUMENT_TOKEN_TO_BE_REPLACED

Charnett Moffett, a bassist and composer whose virtuosity on both electric (often fretless) and acoustic instruments was matched by his versatility, died April 11 at … END_OF_DOCUMENT_TOKEN_TO_BE_REPLACED

Ron Miles, a cornetist, composer, and educator who became a revered and innovative figure in jazz while maintaining a career in the far-flung state of … END_OF_DOCUMENT_TOKEN_TO_BE_REPLACED