Skip to content
Become a member and get exclusive access to articles, live sessions and more!
Start Your Free Trial
Home > Features > Roswell Rudd: Song Styles of a Planet 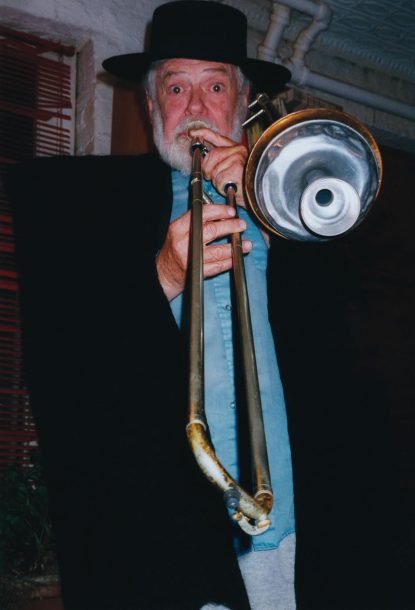 The influential trombonist and composer Roswell Rudd has died. His passing was confirmed this afternoon by a representative for the label RareNoise, which released Rudd’s recent album, Embrace. He was 82, and while no official cause was provided, Rudd had suffered with cancer for several years. JT is currently at work on an obituary. Presented here is the magazine’s 2006 profile, by Geoffrey Himes.

When Roswell Rudd turned 70 in November, the legendary trombonist celebrated by throwing a party at New York’s Rubin Museum of Art. The party featured a reunion with some of Rudd’s earliest and most influential musical partners–not Cecil Taylor, Archie Shepp or John Tchicai but Eli’s Chosen Six.

George Mraz, a Czech bassist who was widely regarded as one of the greatest jazz bassists of all time, died September 16. He was one … END_OF_DOCUMENT_TOKEN_TO_BE_REPLACED

George Wein, a pianist, producer, and impresario whose name became synonymous with the concept of the jazz festival, died September 13 at his home in … END_OF_DOCUMENT_TOKEN_TO_BE_REPLACED

Phil Schaap, a radio broadcaster, record producer, educator, and historian whose knowledge of jazz was legendary in its breadth and detail, died September 7 in … END_OF_DOCUMENT_TOKEN_TO_BE_REPLACED

Peter Ind, a bassist, record producer, and venue owner whose seven-decade career made him a legend of British jazz, died August 20. He was one … END_OF_DOCUMENT_TOKEN_TO_BE_REPLACED