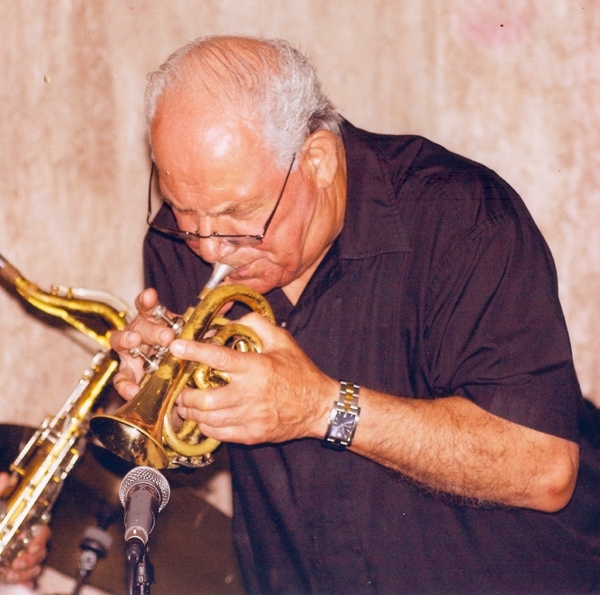 In the fall of 1991, Dizzy Gillespie was performing in the ballroom of a hotel in Falmouth, Mass. Less than two years before his death, Dizzy was obviously weak and very sick. Yet during the show, Diz was beautifully, subtly supported by another trumpeter: Lou Colombo.

“Lou is shadowing him, helping him out,” I said to my girlfriend Lisa. “But he doesn’t want to make a big deal about it. You can tell how much he loves Diz.”

And we here on Cape Cod loved Lou Colombo, who died unexpectedly on March 3, “just moments after leaving the bandstand, one of his favorite places to be,” according to his Cape Cod Times obituary.

Born in 1927 in Brockton, Mass., Lou served in the Army band in World War II and played professional minor league baseball for the St. Louis Cardinals and the Brooklyn Dodgers, with a career batting average of .350. After a broken ankle cut short his baseball career, Colombo dove into music and his trumpet. His career included stints with the Charlie Spivak and Perez Prado bands and the Artie Shaw Orchestra. On Cape Cod, Lou’s gigs with Dick Johnson and Dave McKenna were legendary, as is their superb Concord album, I Remember Bobby, a tribute to Bobby Hackett.

Says veteran musician Paul Nossiter, as quoted in the Cape Cod Times, “Anyone who heard Lou play had to appreciate what a good musician he was. But even if you couldn’t understand that, what you’d appreciate is how much he enjoyed entertaining. He was very inclusive. He wanted the musicians to enjoy themselves. He wanted the people in the audience to enjoy themselves.” And we did.

Dick Golden—the legendary radio host who for over 25 years entertained and enlightened Cape Cod with his Night Lights show—said, “I was interviewing Dizzy Gillespie in his hotel room and Diz said he had to make a quick phone call. ‘I’m calling the best trumpet player in the world,’ he said. Turned out he was calling Lou!”

In 1988 Diz was discussing Lou to jazz radio host Eric Jackson: “Lou Colombo is what I would call a trumpet painter; he resolves. He starts playing and the notes keep going, but the chord keeps changing all the time…he plays with one hand! He plays the valves with his right hand but doesn’t hold the horn with his left hand. The guy’s amazing!”

Says Golden, “What I’ll always remember is when Lou stepped back to let another musician solo, he would hold his trumpet to his heart with both hands. And that’s where his horn would stay until he would play again. I’ll always recall Lou with his trumpet over his heart.”

Golden, who is dear friends with Tony Bennett, adds, “When Tony plays Cape Cod in August, he always wants to go the club where Lou is playing to listen. Last summer there was a birthday cake for both of them at the Roadhouse Café (owned by Lou’s son, David). We’ve been celebrating both Tony and Lou’s birthdays for at least 15 years. His death has left such a huge hole on Cape Cod. The man was beloved.”

Trombonist and educator Mike Persico played with Lou many times over the years. He recalls, “Every Thursday during the summers at Colombo’s Café, performing with Lou was something I looked forward to. Just a quartet—me on trombone; Bob Hayes on piano; a great young kid, Kareem Sanjaghi on drums; and Lou. I swear, every night was magic. Not only was Lou the greatest jazz player—he was lyrical beyond description—but he was a genuine showman. Everyone knew he was having the best time of all. Lou welcomed any musician to join us for some tunes; we loved it and so did the crowd. One night a 13-year-old trumpet student came in for dinner and Lou had already asked the boy earlier to bring his horn. His parents were composers themselves from New York. Long story short: The lad comes up to play ‘The Saints’ and ‘Hello, Dolly’ with his music to read. Within seconds, Lou had it figured—I held the songs while Lou stood side by side with him and helped him through two choruses or so of each tune. What an experience! The kid did a fine job, did his folks proud. After the break the parents walked up to Lou, thanking him for this rare opportunity, something the father said his son would treasure for the rest of his life. Now that’s a legacy.”

I’ll always remember Lou during the summer of 2003, when his band did a Sunday residency at a waterfront Hyannis restaurant. My daughters, then 7 and 4 years old, would dance in front of the bandstand. Despite a few looks from patrons, Mr. Colombo would encourage them each Sunday. “You’re lovely dancers,” he said one afternoon. He turned to a fellow musician: “Hey, there’s the future of jazz right there.”

Lou Colombo—as great a musician as he was a human being.

And that’s saying something.

The following is an official statement from the family of the late Elvin Jones, received at the JazzTimes office earlier today, December 14. The family … END_OF_DOCUMENT_TOKEN_TO_BE_REPLACED

David Ornette Cherry, a multi-instrumentalist, composer, and poet who worked to merge the jazz tradition with classical and various African and world music traditions, died … END_OF_DOCUMENT_TOKEN_TO_BE_REPLACED

Mick Goodrick, a guitarist and teacher who was arguably the most influential guitar pedagogue in the history of jazz, died November 16 at his home … END_OF_DOCUMENT_TOKEN_TO_BE_REPLACED

Terry Woodson, a trombonist, arranger, librarian, copyist, conductor, and record producer, passed away on October 19. A graduate of the University of Tulsa, he joined … END_OF_DOCUMENT_TOKEN_TO_BE_REPLACED