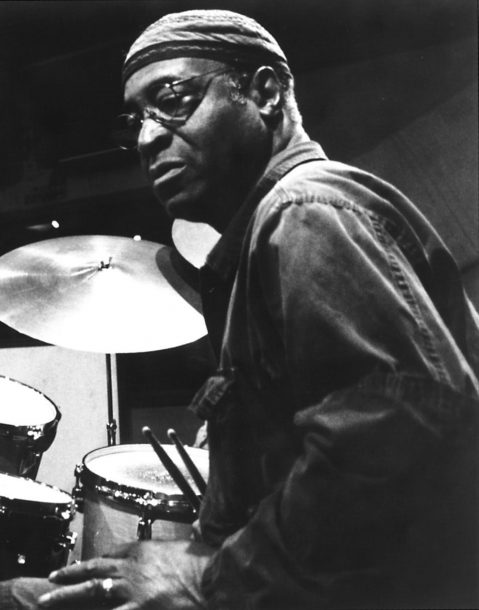 One afternoon last summer I was performing at the City Winery in Manhattan with the fine young trumpeter Michael Rodriquez and his quartet. Midway through our set I noticed Rashied Ali take a seat with a friend near the bandstand. After one of the tunes I went to the side of the stage to say hello. He acknowledged my greeting with a few polite words but he was eyeing the bandstand with a definite intention. He wanted to play and I wanted him to play. A chance to hear and watch a master is always a welcomed opportunity.

“Man, I sure would like to play those beautiful drums!” he said.

I quickly answered, “Sir, I sure would love to have you play them!”

So Rashied dashed to the stage and took a seat behind my Craviotto drum set. Michael called “Moment’s Notice” and they were off. It was wonderful to hear Rashied offer his wonderful feel and sound to the proceedings. An additional delight was to have him christen my drums and cymbals with his vibrations.

After the set we visited a bit more and he gave me a copy of his latest recording, the Rashied Ali Quintet’s Live in Europe. It features my friend, bassist Joris Teepe, who was grateful to be in Rashied’s band. It was indeed a spirited ensemble that was not afraid to align and collide, swing and stretch or soothe and burn.

On Aug. 13 I was enjoying listening to WKCR. They were playing some various late John Coltrane explorations that were definitely beckoning the spirits. Then they announced that Rashied Ali had passed the day prior. I was in shock. I phoned the station to find out details and at that time they were unaware of the circumstances. I later discovered that he had suffered a heart attack and seemed to be recovering fine. Unfortunately, while he was preparing to go home from the hospital, he had another heart attack that took his life. I was deeply saddened. He looked so great when I saw him just a month earlier.

I became aware of Rashied’s artistry through an ABC Impulse! box set entitled The Drums that my brother gave me as a Christmas gift around 1978. The recordings and extensive liner notes gave this then 14-year-old farm boy living in Illinois great insight into the wide range of the jazz-drumming legacy. The Drums exposed me to Sid Catlett, Kenny Clarke and Roy Haynes, but also Ed Blackwell, Milford Graves, Sunny Murray and Rashied. I recollect the impact of hearing him on a selection with Alice Coltrane called “Gospel Trane.” He had a swinging cymbal beat and approach that allowed an ebb and flow with the time feel. I was unaccustomed to hearing that kind of flexibility. I dug how liberating it seemed to be part of the flow of the music, not just a steady timekeeping presence.

In college we would check out later recordings of John Coltrane with Rashied Ali like Meditations and Live in Japan. I remember listening to Live in Seattle while traveling with the Either/Orchestra and being overwhelmed, and a bit terrified, by the power of the music. Rashied propelled the explorations with a relentless intensity. His range of expression extended beyond the tangible. I first saw Rashied play live with the band Prima Materia at the Knitting Factory. It was amazing to witness his intimate physical relationship with the drum set. His focus allowed his ideas to flow effortlessly through his limbs and the sound he offered lifted the music.

I have to admit that I only recently really checked out Interstellar Space, Rashied’s legendary duet recording with John Coltrane. I feel a sensory connection beyond the aural when listening to that recording. I can see, smell and taste the sound! In any situation, Rashied’s sonic dimensions welcomed you deep inside the music, whether it was an intense flurry of energy, a deep groove or a sparse landscape. He swung with a pulse delivered through his cymbal or through polytonal bursts of propulsion. You felt a big picture pulse field in whatever he played.

Beyond his instrument, Rashied Ali was devoted to the values of freedom and personal expression. From 1973-1979 he maintained Ali’s Alley, an influential free-jazz loft club in New York. He also had his own label, Survival Records, that produced numerous recordings.

All of these elements made Rashied Ali an invaluable contributor to the jazz community. His dedication will remain a source of inspiration for generations of improvisers.

The following is an official statement from the family of the late Elvin Jones, received at the JazzTimes office earlier today, December 14. The family … END_OF_DOCUMENT_TOKEN_TO_BE_REPLACED

David Ornette Cherry, a multi-instrumentalist, composer, and poet who worked to merge the jazz tradition with classical and various African and world music traditions, died … END_OF_DOCUMENT_TOKEN_TO_BE_REPLACED

Mick Goodrick, a guitarist and teacher who was arguably the most influential guitar pedagogue in the history of jazz, died November 16 at his home … END_OF_DOCUMENT_TOKEN_TO_BE_REPLACED

Terry Woodson, a trombonist, arranger, librarian, copyist, conductor, and record producer, passed away on October 19. A graduate of the University of Tulsa, he joined … END_OF_DOCUMENT_TOKEN_TO_BE_REPLACED