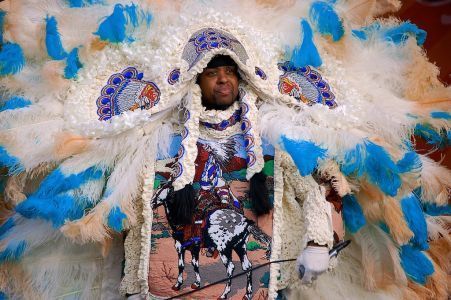 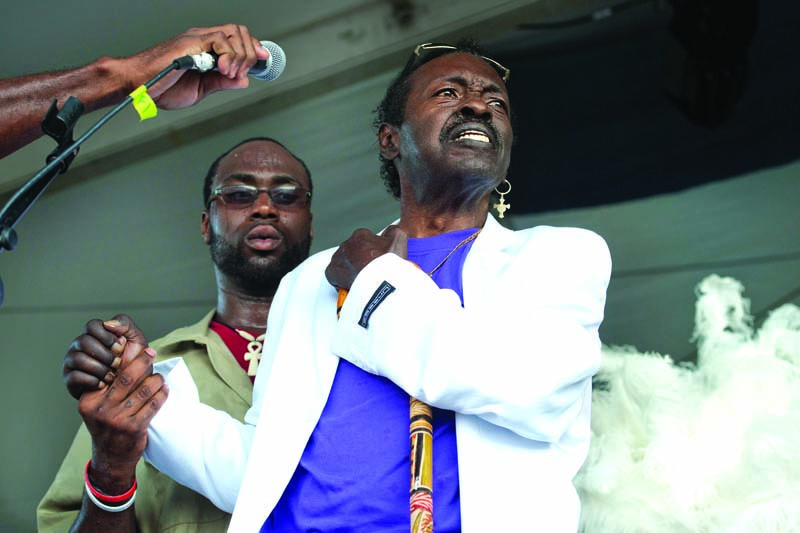 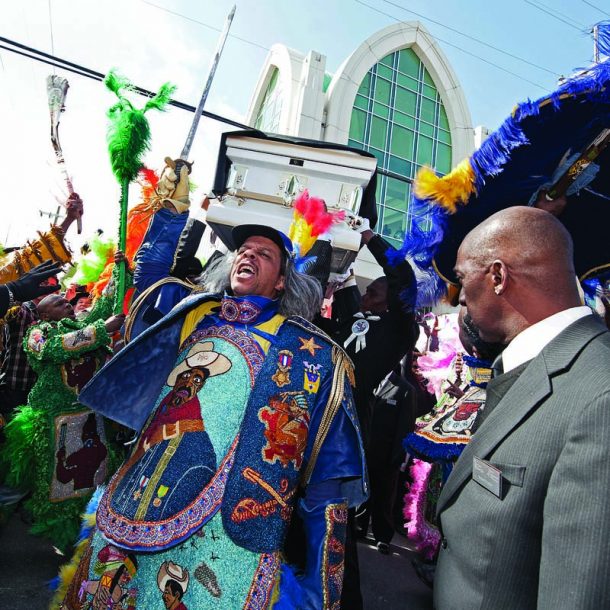 “He is never to be left alone.” That was the message delivered to members of New Orleans’ Mardi Gras Indian community at a meeting held shortly after the Jan. 20 death of Wild Magnolias Big Chief Theodore Emile “Bo” Dollis. He was 71 and had battled a spate of health problems for nearly a decade.

Preparations were being made for Dollis’ final appearances: at the Carver Theater in the Treme neighborhood, where he would lie in state prior to a musical celebration of his life led by his son; and at his funeral the following day, which would conclude with a large musical procession through the streets. In each setting, the Mardi Gras Indian Queens overseeing the weekend’s “life celebration” wanted their Big Chief surrounded by trusted members of the community.

It was protocol, they said. But as the sendoff events got underway, that protocol illuminated a key aspect of Dollis’ legacy. Whether he was fusing New Orleans funk with the chants and rhythms of the city’s century-old black masking tradition, or helping to forge a more peaceful dynamic among once-violent Mardi Gras Indian gangs, Dollis always stood for a sense of togetherness, even at the services that preceded his burial at Providence Park Cemetery on Jan. 31.

A powerful singer with a raw and gravelly voice, Dollis began masking Indian as a teenager and took over as Big Chief of the Wild Magnolias in 1964. The band we know today as the Wild Magnolias got its start when funk keyboardist Wilson “Willie Tee” Turbinton performed with Dollis on a whim, at a show on the campus of Tulane University. (The producer of that show was a student named Quint Davis, who would go on to become the longtime executive producer of the New Orleans Jazz & Heritage Festival.) By 1970, Dollis had teamed up with vocalist Monk Boudreaux, a handful of Indian percussion players and singers and what would become an all-star cast of musicians to cut the first major recording of Mardi Gras Indian music, a 45-rpm single titled “Handa Wanda.” The group also performed at New Orleans’ inaugural Jazz Fest. A series of albums and tours followed, and the once-clandestine sound of the Mardi Gras Indians became available worldwide. Boudreaux, now the legendary Big Chief of the Golden Eagles, left the band in 2001 over a management dispute but he and Dollis remained friends. They performed together on special occasions until Dollis’ death.

As the late Big Chief lay in state at the Carver Theater on Jan. 30, visitors shared stories of his career and his role in the Indian community. A rotating roster of Big Chiefs and Queens from other tribes, clad in sparkling, beaded suits, stood “honor guard” at either side of his coffin, a visual reminder of the desire to keep him surrounded by loved ones even in death.

Speaking to the gathered crowd, Dollis’ son, Gerard “Bo Jr.” Dollis, who has led the Wild Magnolias for the past few years, spoke of his father’s indelible dedication to the band and to Indian culture. “The last thing he told me before he passed, he said, ‘I don’t care what you do, you just carry the Wild Magnolias,'” said the younger Dollis. “As far as the music, I’m still gonna take it around the world. Daddy, you got your own crown right now.”

Later, mourners lifted their voices to sing the Big Chief homage “Indian Red,” while the coffin was carried out of the theater. Near the end of the small procession, the music changed as the group began to chant, “Indians, here we come,” which echoed on the steps of the theater long after Dollis’ body had been taken away.

After the visitation, Bo Jr. led a musical tribute to his father featuring Rockin’ Dopsie Jr., Travis “Trumpet Black” Hill, the 101 Runners and the Golden Comanches’ Big Chief Juan Pardo, who credited Dollis with paving the way for his own career as a Big Chief and professional singer. The band’s members ebbed and flowed as they worked their way through Wild Magnolias hits like “Hey Now Baby,” featuring the prescient lyric, “We hate to leave you/We hate to say goodbye.”

At Dollis’ funeral the next morning, more than 30 costumed Indians, led by a scepter-wielding Big Queen Cherice Harrison-Nelson, opened the ceremony with a procession into Xavier University’s Convocation Center. “May peace be with you … because that was the message of the Big Chief’s life,” said New Orleans Mayor Mitch Landrieu, the first of many speakers at the two-hour service. Dollis represented “the beauty and soul and authenticity of what New Orleans is,” Landrieu said, and used his talent “to bring people together.”

An emotional Quint Davis also spoke. “Bo Dollis was the face, the sound, the everything that opened the door to all that has come,” he said. Turning to address Dollis directly, Davis continued, “Your soul and your smile and spirit will live on in New Orleans forever.” His voice broke as he added, “I was always proud to call you my Big Chief.”

Finally, Dollis’ coffin was escorted by costumed Indians out into the sunshine, where a crowd of hundreds had gathered. Amid chants of “Big Chief Bo” and “shallow water, oh mama,” Boudreaux, Bo Jr. and Big Queen Rita came together behind the car that carried Dollis and began the procession. Ahead of them, Harrison-Nelson placed her scepter on the side of the white hearse, as if to connect with Dollis one more time.

Meghan Stabile, an innovative jazz promoter, producer, organizer, curator, and advocate who proudly adopted the New York Times’ description of her as a “modern impresario,” … END_OF_DOCUMENT_TOKEN_TO_BE_REPLACED

Grachan Moncur III, a trombonist and composer who forged a unique identity in the “new thing” of 1960s jazz, died in his longtime home city … END_OF_DOCUMENT_TOKEN_TO_BE_REPLACED

Charnett Moffett, a bassist and composer whose virtuosity on both electric (often fretless) and acoustic instruments was matched by his versatility, died April 11 at … END_OF_DOCUMENT_TOKEN_TO_BE_REPLACED

Ron Miles, a cornetist, composer, and educator who became a revered and innovative figure in jazz while maintaining a career in the far-flung state of … END_OF_DOCUMENT_TOKEN_TO_BE_REPLACED