Skip to content
Become a member and get exclusive access to articles, live sessions and more!
Start Your Free Trial
Home > Features > Mickey Baker: A Tough Customer Who Never Lost His Edge 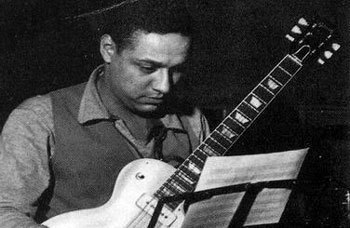 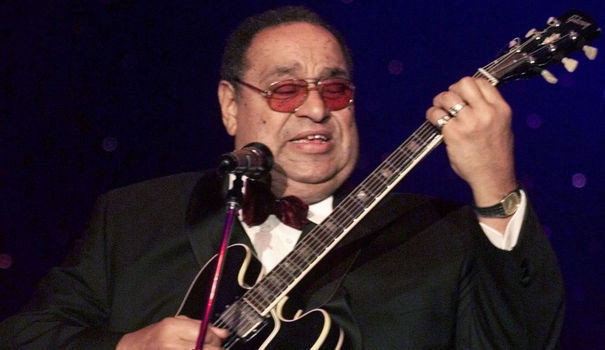 In the radio documentary, Let the Good Times Roll, Mickey Baker told producer Lex Gillespie that “[If it wasn’t] for the blues, we’d all be sitting around sipping tea and listening to chamber music.” Baker, who died on November 27 at 87 at his home near Toulouse, France, knew from chamber music (he studied classical composition with Iannis Xenakis), but it was blues that suffused his music, whether it was the pop, R&B, or jazz that he was called upon to play as a session man, or his concerto, “The Blues Suite,” which he composed for guitar and orchestra.

Baker was born in Louisville, Ky., in 1925 to a 12-year-old girl whose mother operated a brothel; Baker understood that his father was a piano-playing john of Scots-Irish heritage. His mother went to prison when he was 11, and Mickey spent his teens riding the rails and raising a little coin as a pool shark, but he was nearly 20 before he picked up a guitar. Jazz greats Charlie Christian and Charlie Parker were his inspiration, and Rector Bailey was an early teacher, but when he saw the sleek white Cadillac, adoring fans and long green that Pee Wee Crayton was earning playing jump blues on the West Coast, he decided to begin “bending strings.”

In a few short years, Baker became one of the most renowned and in-demand of the legion of sidemen and session guitar players whose tasty fills and propulsive chords added immeasurable appeal to the work of singers, saxophonists and harmonica players in the post-WWII era. For every headlining guitar-slinger like T-Bone Walker, B.B. King or Albert King, there was an unheralded Carl Hogan with Louis Jordan; Clarence Holliman or Wayne Bennett with Bobby Bland; Pat Hare with Junior Parker; Louis Myers with Little Walter; Eddie Taylor with Jimmy Reed; and Robert Jr. Lockwood with Sonny Boy Williamson.

While Baker was largely self-taught, the Times obit quotes his wife Marie recalling him saying, “I stole everything I could from [Rector Bailey] and made my honey from it.” Baker’s honey flowed on sessions for Atlantic, Savoy, OKeh, King and fledgling labels in New York. A short list of the hits he appeared on includes “Shake, Rattle and Roll” by Big Joe Turner; “Money Honey” by the Drifters; “Don’t Be Angry” by Nappy Brown; “Jim Dandy” by LaVern Baker; “Mama, He Treats Your Daughter Mean” by Ruth Brown; “Whole Lotta Shakin’ Goin’ On” by Big Maybelle; “Need Your Love So Bad” by Little Willie John; and Ray Charles’ first chart success, “It Should Have Been Me.”

Baker also played on a series of funky instrumentals in 1956 with pianist Sammy Price and tenor saxophonist King Curtis. The group was billed by Savoy as “Sammy Price and the Rock Band.” Baker and King Curtis, who later cooked up “Memphis Soul Stew” and led Aretha Franklin’s band, first worked together backing the white blues singer and songwriter Doc Pomus at the Musicale in Harlem. In Lonely Avenue, Pomus’s biographer Randy Halberstadt describes the uptown venue as one where the house “hooted and hollered” for music that ranged from the “most delicate jazz improvisations to the lowest gutbucket growls.”

In Josh Alan Friedman’s Tell the Truth Until They Bleed, Pomus admitted that players of Baker’s caliber looked down on country bluesmen. “My group of people-Joe Turner, Mickey Baker, King Curtis-used to laugh at all the country blues singers who were backwards musically…[But] when the rock stars started using them as opening acts, all of a sudden these guys [Muddy Waters, Lightnin’ Hopkins, John Lee Hooker] became well known.” Ironically, by the mid-’70’s, Baker was recording country blues material by the likes of Robert Johnson, Son House, and Leroy Carr, and on his 1973 release Mississippi Delta Blues, he used string arrangements on such classics as “Blues Before Sunrise” and “Spoonful” and “High Sheriff Blues.” Here in 1972 he sings “How Come My Dog Don’t Bark.”

Baker owed his household name status to “Love Is Strange,” the million-seller he recorded with his guitar protégé Sylvia Vanderpool for Groove Records in 1956. Les Paul and Mary Ford were models for Mickey & Sylvia, who were together for a couple of years before they made “Love Is Strange.” The song reached #1 on the R&B chart and #11 on the Pop, and was soon covered by Buddy Holly and the Everly Brothers, and over time by Kenny Rogers, Sonny & Cher, Paul McCartney and many others. Years later, as Sylvia Robinson, Vanderpool founded Sugar Hill Records and produced the hip hop prototype, “Rappers Delight,” while “Love Is Strange” went on to soundtrack immortality in “Dirty Dancing” and other movies.

In its day, “Love Is Strange” was influential on multiple fronts. With Bernard Purdie, in his recording debut on drums [oops, see Comments below], it combined calypso and bolero rhythms, sultry harmonies and risqué spoken dialogue, and Baker’s stinging guitar to push against the scrim of vaunted respectability then crumbling before the force of rhythm and blues. Baker’s guitar work was one of the most prominent examples of raw blues playing ever to be heard on Top 40 radio, and was cited by Jimi Hendrix, Michael Bloomfield and others as a powerful influence. For the songwriter Neil Sedaka, the 45 was a talisman. In his Brill Building history, Always Magic in the Air, Ken Emerson writes, “Sedaka was equally keen to succeed as a songwriter and a performer. He bought a copy of ‘Love Is Strange,’ scratched the name of the song’s author off the label, and substituted his own to see how it would look on a hit single.”

The tune’s origin is as wonderfully convoluted as anything in modern popular music. Baker’s guitar riff is remarkably similar to one played by Bo Diddley on Billy Stewart’s Chess single, “Billy’s Blues,” and Bo apparently copped his from Chicago bluesman Jody Williams. Williams was touring with Diddley in ’56, and Mickey & Sylvia were part of the package too. But Diddley not only played the lick, he wrote “Love Is Strange,” and made an unreleased demo of it for Chess Records in 1956. However, because he was in a publishing dispute of his own with Chess, he credited the tune to his wife, Ethel Smith, and encouraged Mickey & Sylvia to record it for the RCA subsidiary Groove on October 17 of that year.

After the song came out, Arc Music, the publishing arm of Chess, sued, claiming it had been copied from their man Diddley’s playing on Billy Stewart’s single. The copyright infringement suit lasted four years and found that “Love Is Strange” had not plagiarized “Billy’s Blues.” Nevertheless, reissues of the recording have since credited Baker, Robinson, and Elias McDaniel (Bo Diddley) as its co-composers.

Mickey & Sylvia continued their run as a duo for a few years but “Love Is Strange” was their only big score. It wasn’t Baker’s last appearance in a memorable duo, however. In 1960, it was his voice and guitar that Tina Turner engaged with on “It’s Gonna Work Out Fine.” The song was a million-seller for Ike & Tina, and a Grammy winner to boot. Baker’s voice is unmistakable on the studio original, but Ike steals the show in this amazing live television footage.

Baker’s influence extended beyond his prolific session work. In 1955, he published the first volume of Mickey Baker’s Complete Course in Jazz Guitar. The book is still widely utilized, and the internet is loaded with testimonials to the efficacy of Mickey’s method. In his autobiography, Blues All Around Me, B.B. King wrote about the Louisville, Kentucky native: “I think of music as angels. Music has been my guardian angel…I found energy and hope in other people’s music. It’s the music that kept me going. Musicians like Mickey Baker, a great guitarist…continued to teach me. Mickey was a studio ace who played with everyone. He also had an instruction book I loved to study.”

Baker spent the past 50 years living in France. Photojournalist Jim Herrington searched him out several years ago and spoke with him over, you guessed it, tea and classical music. Herrington reported that Baker “loves to read, and it shows… his bookshelves are stacked with volumes about ancient Roman history, psychology, art and architecture. He’s a forward-looking man, but I guess he’s always been. He’s happy enough that the music he made has excited people, but he seems more interested in talking about other kinds of history, hanging out with his wife and generally relaxing and enjoying life.”

I’d like to think that royalties from “Love Is Strange” and the Jazz Guitar books brought Baker the measure of security that was abjectly missing from his childhood, but Herrington’s photo suggests that even in the South of France, he was still a tough customer who never lost the edge that made his guitar playing ring and rock and reverberate.

David Ornette Cherry, a multi-instrumentalist, composer, and poet who worked to merge the jazz tradition with classical and various African and world music traditions, died … END_OF_DOCUMENT_TOKEN_TO_BE_REPLACED

Mick Goodrick, a guitarist and teacher who was arguably the most influential guitar pedagogue in the history of jazz, died November 16 at his home … END_OF_DOCUMENT_TOKEN_TO_BE_REPLACED

Terry Woodson, a trombonist, arranger, librarian, copyist, conductor, and record producer, passed away on October 19. A graduate of the University of Tulsa, he joined … END_OF_DOCUMENT_TOKEN_TO_BE_REPLACED

Ronnie Cuber, a baritone saxophonist with a wide and versatile range on his instrument, died October 8 at his studio in New York City. He … END_OF_DOCUMENT_TOKEN_TO_BE_REPLACED