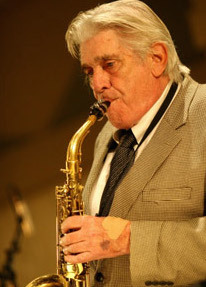 Med Flory, an alto saxophonist who co-founded the group Supersax and was also a prolific television actor, died in North Hollywood, Calif., on March 12. The cause of death was not reported. Flory was 87.

Flory was best known in the jazz community for his work with Supersax, a nine-piece band he and bassist Buddy Clark formed in 1972, originally as a tribute to Charlie Parker. The group took home a Grammy in 1974 for its album Supersax Plays Bird, one of several Supersax recorded for such labels as Capitol and Columbia.

Meredith Irwin Flory was born on Aug. 27, 1926, in Logansport, Ind. He initially played clarinet in his high school band. After a stint in the military and completion of college, he moved to New York, where he played in the bands of Woody Herman, Claude Thornhill and others.

Flory also had an active career as an actor on several 1960s TV hits, primarily Westerns such as Gunsmoke and The Rifleman, as well as roles in several films.

Meghan Stabile, an innovative jazz promoter, producer, organizer, curator, and advocate who proudly adopted the New York Times’ description of her as a “modern impresario,” … END_OF_DOCUMENT_TOKEN_TO_BE_REPLACED

Grachan Moncur III, a trombonist and composer who forged a unique identity in the “new thing” of 1960s jazz, died in his longtime home city … END_OF_DOCUMENT_TOKEN_TO_BE_REPLACED

Charnett Moffett, a bassist and composer whose virtuosity on both electric (often fretless) and acoustic instruments was matched by his versatility, died April 11 at … END_OF_DOCUMENT_TOKEN_TO_BE_REPLACED

Ron Miles, a cornetist, composer, and educator who became a revered and innovative figure in jazz while maintaining a career in the far-flung state of … END_OF_DOCUMENT_TOKEN_TO_BE_REPLACED