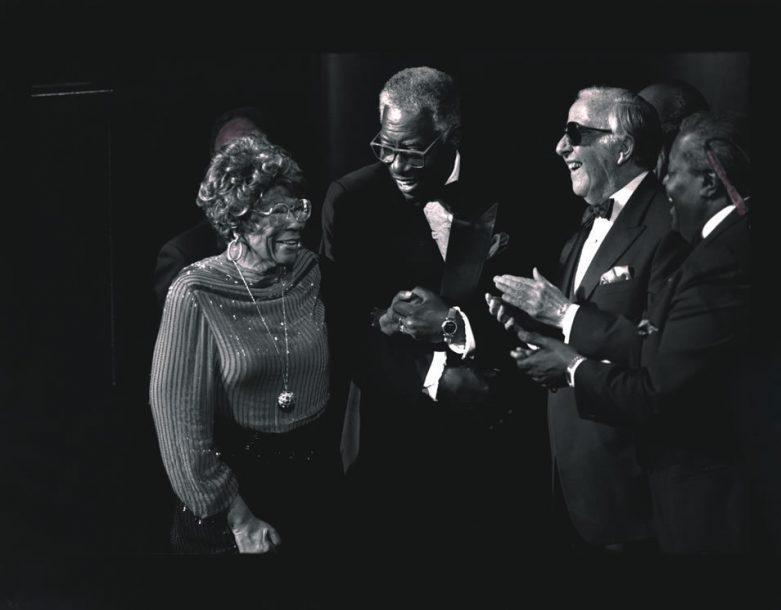 I first heard George Shearing when I was just a teenager going to my first dance at a very fancy nightclub called Hatchett’s in London. He was a very impressive piano player, and he had a great musician with him-violinist Stephane Grappelli; that’s what I remember about the whole evening. It was only after years later, when I was married to Jimmy McPartland, that we heard his records and also found out that he was coming to New York to live. Jimmy and I were very eager to hear him in person. Soon he arrived in Chicago with his group, composed of John Levy on bass, Marjorie Hyams on vibes, Chuck Wayne on guitar and Denzil Best on drums. We went to hear him and immediately became aware of the special voicing and block chords that made him famous. He had a big hit with “September in the Rain” and later composed “Lullaby of Birdland,” written for the club of the same name. The song is still very popular and he played it wherever he went.

As time went on, George and I became friends and we jammed together whenever there was a chance. Meanwhile, I invited him to be on Piano Jazz and he agreed happily. He had such a wonderful personality and was such a funny guy. He would play jokes, like changing key in the middle of a tune, or going into a Dixieland number and other things calculated to throw me off, and they often did. Thinking about it now makes me realize it was one of the best shows we’ve ever done. We also did a record together, appropriately called Alone Together, which was great fun and a hit, but nothing could top the Piano Jazz we did together.

The fact that we both received the Order of the British Empire from the Queen, and that George was knighted, makes us two Brits with all these great things going for us. I will always remember his wonderful harmonies and his compositions, including “Lullaby of Birdland” and “Conception,” plus his incomparable sense of humor, which made his music that much more meaningful and heartfelt. He will be greatly missed by all.

Meghan Stabile, an innovative jazz promoter, producer, organizer, curator, and advocate who proudly adopted the New York Times’ description of her as a “modern impresario,” … END_OF_DOCUMENT_TOKEN_TO_BE_REPLACED

Grachan Moncur III, a trombonist and composer who forged a unique identity in the “new thing” of 1960s jazz, died in his longtime home city … END_OF_DOCUMENT_TOKEN_TO_BE_REPLACED

Charnett Moffett, a bassist and composer whose virtuosity on both electric (often fretless) and acoustic instruments was matched by his versatility, died April 11 at … END_OF_DOCUMENT_TOKEN_TO_BE_REPLACED

Ron Miles, a cornetist, composer, and educator who became a revered and innovative figure in jazz while maintaining a career in the far-flung state of … END_OF_DOCUMENT_TOKEN_TO_BE_REPLACED