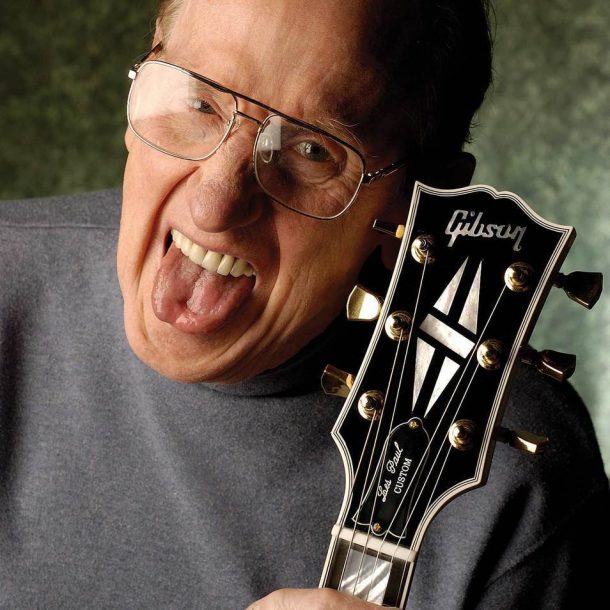 I met Les 25 years ago when he had first started to perform in public again after taking a few years off. He was appearing at a small club in downtown New York City called Fat Tuesday’s, and his playing was just about the best I had ever heard, and his trio with Lou Pallo on rhythm guitar and Gary Mazzaroppi on bass was the most refreshing sound to ever enter my ears. I had heard Les’ records when I was 6 years old. My father would show me the chords to the songs and I would play along, so I was no stranger to his music when I met him. His music is what set me off to become a professional guitarist.

Les had dozens of million-selling hit songs. He was a pop star. Les as we all know invented sound-on-sound recording as well as the solid-body electric guitar. This, coupled with his incredible ability as a guitarist and musician, is what launched his fame. And let us not forget that sound-on-sound recording allowed musicians to overdub, but they would only get one shot at those additional tracks. So if you made a mistake you had to start the song all over again. For example, say you record a rhythm-guitar track first, then a melody track, then a harmony track and then a bass track. If you made a mistake on any of these tracks, you would have to start recording the first rhythm-guitar track again. You could not fix notes and cut and paste parts or even re-record any of the previous tracks. This is where Les excelled. The creative, intense arrangements of his hits, the multitracked vocals, the insane amount of guitar parts: Each of those tracks was recorded in one take! This is what proves to me the magnitude of Les’ talents as a musician, producer, engineer and guitarist. He was like no one else.

Les was also one of the warmest, most supportive individuals I have ever met. He asked me to join his group in February 2000 for his weekly Monday night gig at the Iridium in midtown Manhattan. I couldn’t sleep for a week after his phone call. It was the greatest experience of my life. The amount I learned from him would not fit into this article, but I will share some of the highlights. First was dedication. Every week he would be there five hours before the gig working on his sound and practicing. We would practice for a few hours every week, and this is why his group was so tight. Les would even talk about music and guitars on the phone at 4 a.m.

I also remember the first week we played together, he started with “I’m Confessin’ That I Love You.” He played the melody on the first 16 bars and looked over at me to play the bridge. When I started playing the melody I realized how thin my tone was and how much I didn’t know about melody playing. He was the master at this. Every Monday after that he would play melodies that would just give me goose bumps-so soulful and full of experience and emotion.

One time, when Les and I were sitting down for dinner before the show, he started to reminisce about his friendship with Django Reinhardt. He told me how, when he was performing at the Paramount Theater, he was in the dressing room shaving and the guard yelled up that Johnny Smith and Django Reinhardt were there to see him. Not believing the guard, he yelled down, “Send them up with Jesus Christ and a six pack of beer.” In walked Django with Johnny Smith. Les said he nearly cut himself with his razor; he just couldn’t believe it. Django and Johnny proceeded to sit down and play the tune “Rose Room” as shaving music. A few years later, in 1952, Les went to France to see Django and arranged for the Gypsy-jazz great to tour with Les Paul and Mary Ford, as Les felt Django never got his due respect in America.

Unfortunately, in 1953 Django passed away at the early age of 43. Les, knowing Django had next to nothing, collected the publishing royalties owed to the Reinhardt family, paid for his funeral and gave the rest of the money to the Reinhardt family. In 2000, I had the honor of being the musical director for the first annual Django Reinhardt Festival in New York. I invited Babik Reinhardt, Django’s son. Les was extremely concerned that Babik would not remember him. While speaking to Babik through Biréli Lagrène, who interpreted, Babik proceeded to tell me the same exact story Les had told me a few months earlier. When they saw each other, they embraced and both starting crying-an amazing moment to say the least.

On a break in between shows one night, when the Iridium was across the street from Lincoln Center, I did a double take as Paul McCartney was walking up to the club in a tuxedo with his then-wife Heather Mills. I knew once people realized it was him there’d be a mad rush, so I quickly introduced myself and offered to take them inside. I escorted them quickly into the dressing room. Les and Paul proceeded to embrace, and again the tears started flowing. I didn’t even know they knew each other. Paul was introduced during the show and got up to tell the story of his and John Lennon’s first gig together in a pub. The only stipulation of them doing the gig was that they played Les Paul/Mary Ford songs.

Every week another rock, jazz or country guitarist, as well as comedians, astronauts (turns out on a few space flights Les’ version of “How High the Moon” was played for the crew) and television stars would come in to pay homage to the master. It was an amazing experience for me personally to get to know Les, and to be a small part of such a wonderfully full and eventful life.

Most important, however, was how Les would-at the end of every night-meet and greet his fans, the everyday people who weren’t stars. Sometimes the line to meet him was 100-people deep. He would stay there sometimes until 3 a.m. to meet everyone in that line, converse with them and take a photo with each and every person. He was one-of-a-kind. He must have signed thousands and thousands of items, guitars and even a pair of breasts one night! Les, I will miss everything about you and our friendship-especially those phone calls at 4 a.m.

Meghan Stabile, an innovative jazz promoter, producer, organizer, curator, and advocate who proudly adopted the New York Times’ description of her as a “modern impresario,” … END_OF_DOCUMENT_TOKEN_TO_BE_REPLACED

Grachan Moncur III, a trombonist and composer who forged a unique identity in the “new thing” of 1960s jazz, died in his longtime home city … END_OF_DOCUMENT_TOKEN_TO_BE_REPLACED

Charnett Moffett, a bassist and composer whose virtuosity on both electric (often fretless) and acoustic instruments was matched by his versatility, died April 11 at … END_OF_DOCUMENT_TOKEN_TO_BE_REPLACED

Ron Miles, a cornetist, composer, and educator who became a revered and innovative figure in jazz while maintaining a career in the far-flung state of … END_OF_DOCUMENT_TOKEN_TO_BE_REPLACED