Ernie Andrews, a deep-voiced singer who scored a major hit (1945’s “Soothe Me”) when he was still in his teens but remained perennially underrecognized by non-musicians in subsequent decades despite working alongside Harry James, Cannonball Adderley, Gene Harris, Lionel Hampton, and the Clayton-Hamilton Orchestra, died Feb. 21 at Conroe Regional Medical Center near Houston, Texas, due to complications following a fall. He was 94. Guitarist Kenny Burrell, one of his closest friends for more than 50 years, contacted us to pay tribute.

I first met Ernie Andrews when I was playing at the Parisian Room in Los Angeles in the early ’70s. I was in [saxophonist/bandleader] Red Holloway’s band there, and Ernie would come in and sing with us sometimes. I knew he had been with Harry James for a while [over 10 years, beginning in 1958—Ed.], but I didn’t know all his history, which was extensive, till I got to know him.

Very people I knew then could do such an excellent job singing so many different styles: modern jazz, the blues, the Great American Songbook. And he was quite an entertainer too. On stage, when he talked between the songs, he showed that he was well-spoken, with a real understanding of the music and a gift for repartee.

There was a time when I would go home to Detroit every Thanksgiving and work two weekends there at Baker’s Keyboard Lounge. I asked Ernie one year if he wanted to go along with me, he said yes, and he had such a great time that we made it a tradition for a while. He would come to my mother’s house for Thanksgiving dinner. We became like brothers.

We talked to each other about once a week over the last few years. He was in his nineties and I recently joined that same club—we don’t have as many friends around as we used to, you know? So it was good to be able to stay close, even if it was only on the phone.

Ernie never got the tribute he deserved for his artistry. He had plenty of fans, but the critics almost ignored him. I think that might have been because he was so versatile. People aren’t always comfortable when musicians can work equally well in different genres. They want to put you in a category, because it’s easier that way. And I understand that. But it’s a shame someone like Ernie couldn’t be recognized more in his lifetime. He deserved awards.

[as told to Mac Randall]

Charnett Moffett, a bassist and composer whose virtuosity on both electric (often fretless) and acoustic instruments was matched by his versatility, died April 11 at … END_OF_DOCUMENT_TOKEN_TO_BE_REPLACED

Ron Miles, a cornetist, composer, and educator who became a revered and innovative figure in jazz while maintaining a career in the far-flung state of … END_OF_DOCUMENT_TOKEN_TO_BE_REPLACED

I’ve been playing the organ since I was 10 years old because I love the sound of the Hammond B-3. Once I heard Jimmy Smith … END_OF_DOCUMENT_TOKEN_TO_BE_REPLACED 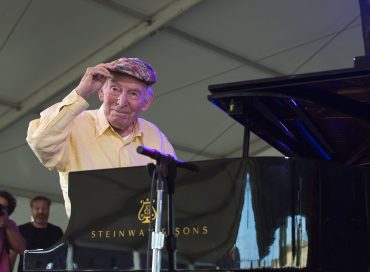 When I was in Europe last September my phone buzzed, and onscreen appeared the name of my longtime friend Darlene Chan—who I’m always happy to … END_OF_DOCUMENT_TOKEN_TO_BE_REPLACED