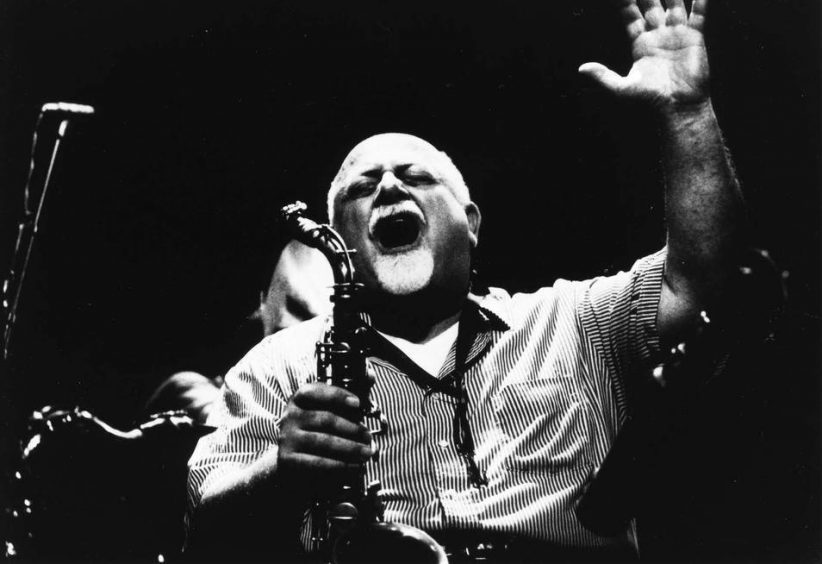 Love line! Love line!” This was Joe’s highest compliment, given to the student whose four-part harmony progression, put up on the board and just sung by the class, was both within the guidelines of the style and inspired. No teacher I had ever addressed the hard work and excitement of musical growth with the directness and honesty that Joe did. When students slacked off, he’d look out the window and talk about jobs with two-martini lunches, professions that let you off at 5 p.m.; but music was full time, a life, a passion, don’t count on any big reward, and what were you going to choose?

I took one year of 18th-19th century harmony, and one year of 12-tone/quarter-tone composition with Joe as a student at the New England Conservatory of Music in the mid-1970s. Sometime during that second year I began to improvise with Joe at his house, sometimes as a duo with all our horns spread around his living room, sometimes with bassist Ed Schuller or pianist Richard Eisenstein. I continued playing with Joe for years after graduating and moving to New York City, always in his mother’s brownstone in Brooklyn. We’d play wild music, slippery and exuberant, and then Mrs. Maneri would serve us espresso and Italian cookies in her immaculate Old World home. The day always included long talks with Joe and his beloved wife, Sonja, about the directions music was going in and what it meant.

Somewhere along the way, Joe began to coax his young son Mat out of his room to improvise along on violin, and you heard the beginnings of the tremendous collaboration they would have in the future, performing and recording at length, an amazing third or seventh act for Joe after years of teaching and of writing large-scale compositions.

It might sound cliché to say, but you really can’t separate Joe Maneri the improviser, composer, teacher, performer or person. He was openly emotional and intellectually rigorous. We used Arnie (as he called him) Schoenberg’s Theory of Harmony in the class, and Joe’s story, like Schoenberg’s in many ways, became a big part of the pedagogy: that he dropped out of high school to play full time, and then at a certain point desired to become a composer, maintaining a rigorous piano practice and theory/counterpoint study regimen. He studied with Josef Schmid, an Austrian composer and student of Alban Berg’s who left Europe during the rise of Hitler. Schmid would knock Joe’s work off the piano if it wasn’t up to snuff, but then take him out to dinner, neither of them having much money.

Joe supported himself the best he could to have time to study, working as an orderly in hospitals, stealing steaks from supermarkets at other times to eat. These stories came to us not in a sensationalist way, but always connected to this drive to push us to take our work seriously. If he could do it, so could we. Before I found out that Joe played sax and clarinet and improvised in ways that connected to my musical experiences with the avant-garde jazz of St. Louis, he helped me get over a fear that learning the languages of the past would inhibit making something new in the present.

Joe loved the long musical line, the mystery of melody/rhythm/harmony that keeps unfolding. You really hear this in his improvising, as his lines unfold persistently, but never quite, into infinity. He would warn you against doing any imitation of him during an improvisation. He loved Bach’s St. Matthew Passion, where multiple lines unfold in counterpoint. He often talked about Chu Berry, and you hear that connection in the rich low-register sound he got on tenor, keeping the old school alive.

He told me once how he wasn’t interested in sounds and effects; he had nature for that. His exploration and codification of microtonal music was surely for its vocal, expressive qualities he knew from his early years playing Greek, African-American, Italian and Jewish musics based on the notes between the notes. But he fully believed that this is where music’s future was, and that large-scale works equal to the great works of the past would be composed with microtonal harmony.

In studying and talking with Joe, his religious faith and practice were periodically brought into the picture, but never imposed. His compositions had religious themes, and he talked often of the spiritual quality he felt in Sonja’s paintings. I hope that over time we get recordings of Joe’s through-composed works, like his volcanic piano concerto, to complete the picture we have from the rich documentation of his improvised music. It all shared this drive toward the revelatory and the transcendent. These can be words used too facilely and quickly, but for many of us, Joe’s work and life was the real mind-and-heart thing.

Charnett Moffett, a bassist and composer whose virtuosity on both electric (often fretless) and acoustic instruments was matched by his versatility, died April 11 at … END_OF_DOCUMENT_TOKEN_TO_BE_REPLACED

Ron Miles, a cornetist, composer, and educator who became a revered and innovative figure in jazz while maintaining a career in the far-flung state of … END_OF_DOCUMENT_TOKEN_TO_BE_REPLACED

Ernie Andrews, a deep-voiced singer who scored a major hit (1945’s “Soothe Me”) when he was still in his teens but remained perennially underrecognized by … END_OF_DOCUMENT_TOKEN_TO_BE_REPLACED

I’ve been playing the organ since I was 10 years old because I love the sound of the Hammond B-3. Once I heard Jimmy Smith … END_OF_DOCUMENT_TOKEN_TO_BE_REPLACED