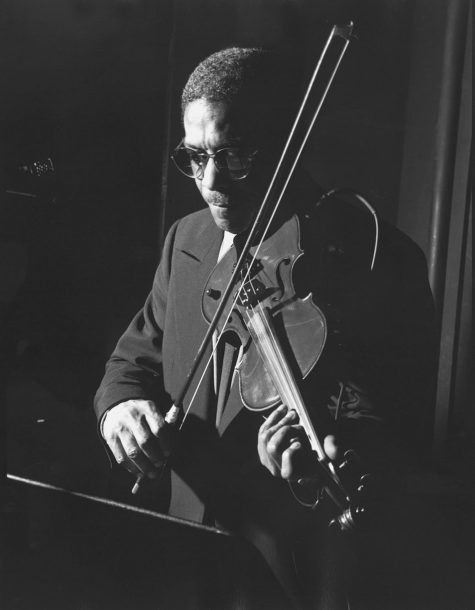 Violinist Billy Bang, noted for forging his own way on his instrument, died on April 11. According to an associate, he had been suffering from lung cancer. Bang was 63.

Born in Mobile, Alabama, as William Vincent Walker, Bang was raised in the Bronx and began playing the violin at a very young age. He was given the nickname Billy Bang in homage to a cartoon character.

Although he won a scholarship to a prestigious boarding prep school in New England, Bang ended up dropping out and returning to the Bronx. Alienated from formal education, Bang gave up the violin. He was drafted into the Army at the age of 18 and served in Vietnam until his discharge a few years later. Many years later he would put the harrowing experience into his music with a set of albums-Vietnam: The Aftermath (2001) and Vietnam: Reflections (2005), the latter even including contributions from Vietnamese musicians.

Bang told JT’s Thomas Conrad in 2005 that his experience in Vietnam haunted him. “I lived in Vietnam, totally, all the time,” the violinist Billy Bang told Conrad. “I couldn’t get on with my life. I couldn’t even handle the Fourth of July.” Although he got his G.E.D. in the Army and studied pre-law and even went to law school for a short time, Bang bounced around at various jobs after his release from the military and eventually picked up the violin again. He dedicated himself to relearning the instrument and became part of the downtown loft-jazz scene of the 70s.

He told Conrad: “The violin was the only instrument I knew, and I wanted to play music. I didn’t know about Leroy Jenkins or Ornette Coleman at that time-or Stuff Smith or Ray Nance or anybody. But I said, ‘I’m determined to become a musician now. Not a violinist, but a jazz musician who happens to play that instrument.'” Bang said that the decision “was almost like joining a priesthood. I knew I would never be rich. It was like accepting a nonmaterialistic approach to life.”

Bang played briefly with the Sun Ra Arkestra. In 1977, inspired by the approach of the World Saxophone Quartet, he formed the New York String Trio with John Lindberg and James Emery, with whom he would play regularly for many years. Bang also developed his own career as a solo artist and bandleader. Over the next 20-30 years, Bang would collaborate with many of the greats of the improvising jazz scene, including William Parker, Hamiet Bluiett, Don Cherry, David Murray and many others. He recorded over 30 albums, including many for the Canadian Justin Time label.

Jean-Pierre Leduc, who worked with Bang at Justin Time, said: “Billy was not only an innovative violinist but also an inspiring one. For too long pegged by many as an ‘out’ or avant-garde player, the last decade saw him deservedly playing much larger venues and instantly gaining new fans. Composing, rehearsing and then recording the two ‘Vietnam’ recordings not only renewed interest in Billy’s music, but it also helped bring peace and order to his life. Playing even a small part in this healing was one of the most amazing experiences of my life.

“At the Montreal Jazz Festival in 2008 Billy brought the house down at the Salle Wilfred Pelletier – a 2,000-seat venue. Very few in the audience had known his name; now they were standing and cheering. I’ll never forget the look on his face when he came offstage: sheer joy.”

Meghan Stabile, an innovative jazz promoter, producer, organizer, curator, and advocate who proudly adopted the New York Times’ description of her as a “modern impresario,” … END_OF_DOCUMENT_TOKEN_TO_BE_REPLACED

Grachan Moncur III, a trombonist and composer who forged a unique identity in the “new thing” of 1960s jazz, died in his longtime home city … END_OF_DOCUMENT_TOKEN_TO_BE_REPLACED

Charnett Moffett, a bassist and composer whose virtuosity on both electric (often fretless) and acoustic instruments was matched by his versatility, died April 11 at … END_OF_DOCUMENT_TOKEN_TO_BE_REPLACED

Ron Miles, a cornetist, composer, and educator who became a revered and innovative figure in jazz while maintaining a career in the far-flung state of … END_OF_DOCUMENT_TOKEN_TO_BE_REPLACED