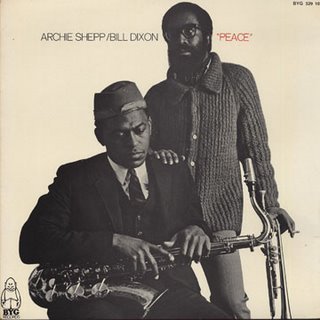 Cover of album by Bill Dixon and Archie Shepp

The publicist associated with trumpeter Bill Dixon has reported that Dixon died last night in his sleep at his longtime home in North Bennington, Vermont after a two-year illness. He was 84. Dixon is survived by his longtime partner Sharon Vogel and two children. Information about a memorial service and where to send donations in his name is forthcoming.

The trumpeter was a fixture on the improvisatonal jazz scene of New England. He was Professor of Music at Bennington College, Vermont, from 1968 until 1995. Over the course of his long career, he performed and recorded with Archie Shepp, Cecil Taylor, William Parker and other notable figures of the avant garde jazz scene.

Dixon was interviewed by Graham Lock in the May 2001 issue of JazzTimes.

Meghan Stabile, an innovative jazz promoter, producer, organizer, curator, and advocate who proudly adopted the New York Times’ description of her as a “modern impresario,” … END_OF_DOCUMENT_TOKEN_TO_BE_REPLACED

Grachan Moncur III, a trombonist and composer who forged a unique identity in the “new thing” of 1960s jazz, died in his longtime home city … END_OF_DOCUMENT_TOKEN_TO_BE_REPLACED

Charnett Moffett, a bassist and composer whose virtuosity on both electric (often fretless) and acoustic instruments was matched by his versatility, died April 11 at … END_OF_DOCUMENT_TOKEN_TO_BE_REPLACED

Ron Miles, a cornetist, composer, and educator who became a revered and innovative figure in jazz while maintaining a career in the far-flung state of … END_OF_DOCUMENT_TOKEN_TO_BE_REPLACED