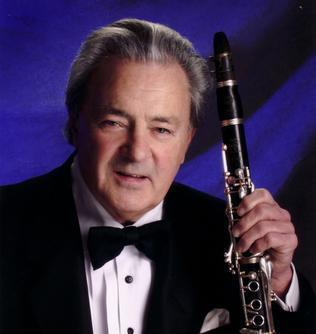 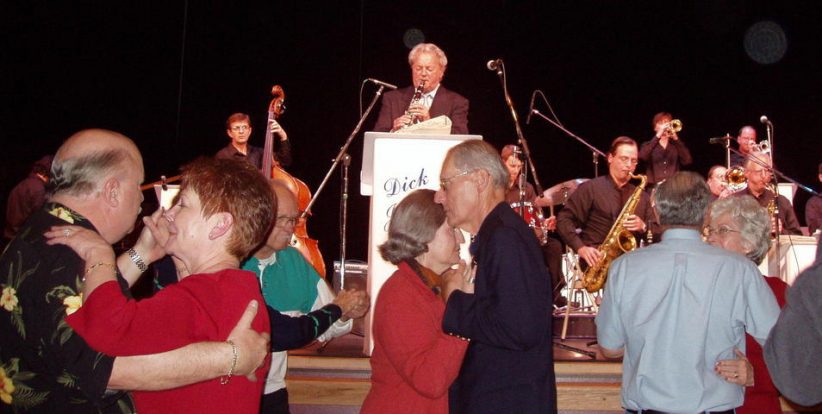 Dick Johnson, perhaps best known for his long stint as frontman for the Artie Shaw Orchestra, died in the Boston area on Sunday, January 10. Johnson died at Beth Israel Deaconess Medical Center in Boston after a brief illness, according to the Conley Funeral Home. He was 84 years old.

Johnson was born December 1, 1925 and grew up in the Brockton, Mass area as part of a musical family. He got his professional start as a musician during a stint with the U.S. Navy in 1944-1946. Johnson served with the navy band on the USS Pasadena during WWII. He often credited his stint in the Navy for kicking off his career in jazz.

After the war, Johnson toured with the big bands of Charlie Spivak and Buddy Morrow. Eventually, after several years on the road, he settled in his hometown of Brockton, Mass. It was there in Brockton where he and close friend, Lou Colombo formed a jazz sextet. The group lasted 10 years, but the friendship and musical kinship lasted for the rest of his life. In addition, Johnson formed his septet-Swing Shift-which was a staple on the Boston music scene for many years. Like Herb Pomeroy, Johnson managed a double career as a perfomer and an educator, teaching jazz at nearby Berklee, where he mentored many younger jazz musicians.

According to the notes on Johnson’s album Artie’s Choice, in 1980, Artie Shaw sent a message to Dick Johnson’s manager, and said: “You wanted to hear what I think of Dick Johnson’s clarinet playing. Okay. At this time, he’s the best I’ve ever heard. Bar nobody. And you can quote me on that, anywhere, anytime!”

Shortly thereafter in 1983 he joined the Artie Shaw Orchestra as its frontman, with Shaw himself retired at least as a clarinetist. Shaw continued to appear with the group and let Johnson act as his surrogate for the next 20 years. Idiosyncratic until the end, Shaw permitted few recordings by the group, but Johnson’s reputation as a clarinetist grew from its live performances. The group disbanded in 2006 a few years shortly after Shaw’s death.

Over the years Johnson performed with Dave McKenna, Charlie Parker, Dizzy Gillespie, Frank Sinatra, Tony Bennett and Buddy Rich. He recorded as a both a leader and a sideman on the Mercury, Emarcy, Riverside, and Concord Jazz labels. His latest CD was Star Dust and Beyond: A Tribute to Artie Shaw for the Crazy Scott label in 2006.

Johnson was an important part of the local Boston jazz and music community. In 1999, Brockton declared May 1 to be “Dick Johnson Day.” Johnson spent the day meeting students and later performed with school band members at Brockton High.

Johnson is survived by family members including his wife of 59 years, Rose Johnson of Brockton, his son, Gary Johnson, and his daughter, Pamela Sargent, wife of noted jazz guitarist Gray Sargent.

Visiting hours will be held Wednesday from 2 to 4 p.m. and from 6 to 8 p.m. in the Conley Funeral Home, 138 Belmont St., Brockton. A remembrance service will be held Thursday at 10 a.m. at the funeral home.

Meghan Stabile, an innovative jazz promoter, producer, organizer, curator, and advocate who proudly adopted the New York Times’ description of her as a “modern impresario,” … END_OF_DOCUMENT_TOKEN_TO_BE_REPLACED

Grachan Moncur III, a trombonist and composer who forged a unique identity in the “new thing” of 1960s jazz, died in his longtime home city … END_OF_DOCUMENT_TOKEN_TO_BE_REPLACED

Charnett Moffett, a bassist and composer whose virtuosity on both electric (often fretless) and acoustic instruments was matched by his versatility, died April 11 at … END_OF_DOCUMENT_TOKEN_TO_BE_REPLACED

Ron Miles, a cornetist, composer, and educator who became a revered and innovative figure in jazz while maintaining a career in the far-flung state of … END_OF_DOCUMENT_TOKEN_TO_BE_REPLACED