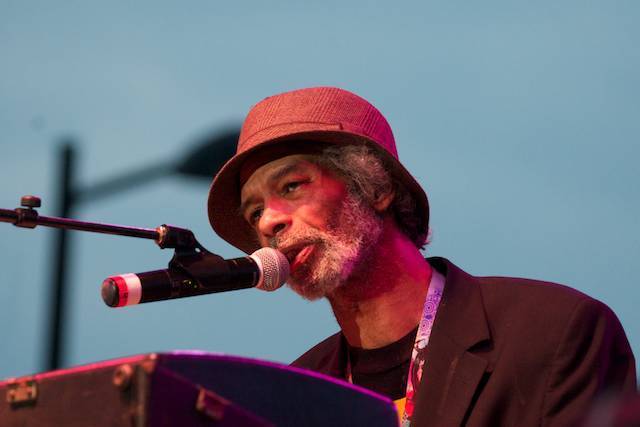 CNN reports that singer/poet/composer Gil Scott-Heron died on Friday afternoon. The cause of death has not been released. He was 62.

With his unique blend of spoken word, political activism and jazz underpinnings, the singer was a major influence on several generations of jazz and rap performers. Among the songs that resonated with audiences and fellow artists were: “The Revolution Will Not Be Televised,” “Whitey’s on the Moon,” “Johannesburg,” and “The Bottle.” The singer battled with substance abuse issues throughout much of his life and often referred to his difficulties in his songs and performances. According to an extensive New Yorker profile of Scott-Heron, he also was HIV-positive.

Frank Malfitano, the director of the Syracuse Jazz Festival, which had featured Scott-Heron last year, said that the singer’s appearance was a significant one for him. “Last June, prior to Boz Scagg’s closing performance on Saturday, more than 25,000 people got to witness, see and hear the genius of Gil Scott Heron on the Jazz Fest’s main stage,” said Malfitano. “Most of the festival’s younger audience goers, whom had never previously had an opportunity to see Gil in his early 80’s heyday, had the chance to see this genius while he was still vital, musically, politically and artistically. For everyone at the festival, it was and shall forever remain a singular honor, one of the proudest moments in the festival’s three-decade history of presenting artists that matter.”

Meghan Stabile, an innovative jazz promoter, producer, organizer, curator, and advocate who proudly adopted the New York Times’ description of her as a “modern impresario,” … END_OF_DOCUMENT_TOKEN_TO_BE_REPLACED

Grachan Moncur III, a trombonist and composer who forged a unique identity in the “new thing” of 1960s jazz, died in his longtime home city … END_OF_DOCUMENT_TOKEN_TO_BE_REPLACED

Charnett Moffett, a bassist and composer whose virtuosity on both electric (often fretless) and acoustic instruments was matched by his versatility, died April 11 at … END_OF_DOCUMENT_TOKEN_TO_BE_REPLACED

Ron Miles, a cornetist, composer, and educator who became a revered and innovative figure in jazz while maintaining a career in the far-flung state of … END_OF_DOCUMENT_TOKEN_TO_BE_REPLACED