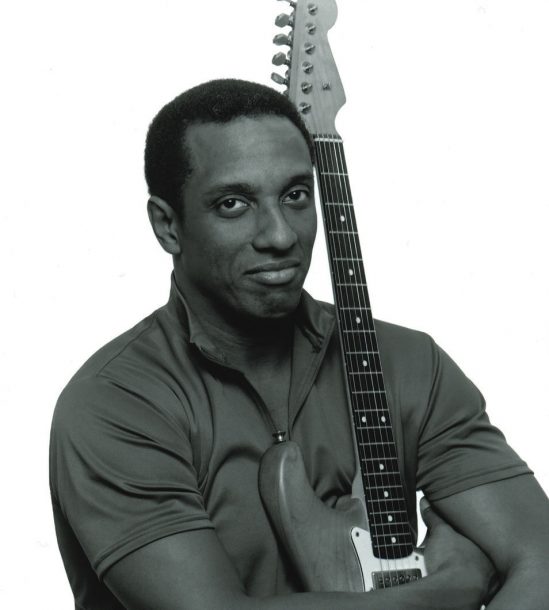 To me, the sign of a truly great musician is if their playing tells you exactly who they are. I can’t remember ever being surprised by a great musician. When I finally got to meet Wayne Shorter or Miles or Bootsy Collins or any of the bad cats I’ve met, they were always exactly who I expected them to be based on listening to their music.

This was never truer than with Hiram Bullock. His guitar was truly his voice, an extension of his soul. In some ways, the notes he played on the guitar were a more transparent window into Hiram than his actual words.

When I first met Hiram, I was 17 and he was 21. We were doing gigs at Mikell’s, the popular music club in New York in the late ’70s, early ’80s. I have to admit, I’d never met a brother like Hiram. He wasn’t very easily categorized. When he soloed, you could hear Hendrix and B.B. King, yes, but you could hear the Allman Brothers in there too. The Allman Brothers? I hadn’t met too many brothers kickin’ the Allman Brothers. But Hiram’s music was his voice. And that voice told you that this wasn’t your average cat. Eventually he explained to me that he was born in Osaka to a military family, spent some early childhood years in Panama, his teens in Baltimore, then studied music in Miami—but I knew all of that before he told me. I could hear it in his solos. I didn’t know the details, the exact places, the exact experiences, but I knew that this guy was a child of the world, not limited to one culture or one perspective.

So it was only natural that Hiram became the quintessential New York musician. The ’80s were the heyday for versatile musicians in New York. On the studio scene, you were expected to play all the styles because the music coming out of New York at that time was a true fusion: The pop music had elements of jazz, the jazz music had elements of pop, reggae had some funk in it, the funk had some reggae in it. And the top musicians, the ones who worked day in and day out, were the ones who could negotiate all the styles in a natural way. No one was better at this than Hiram. He wasn’t a funk guy who knew a couple of rock clichés; he wasn’t a rock guy who thought he was funky because he owned a wah-wah pedal. Hiram truly felt all the styles in his soul. And on top of that, he always sounded like Hiram—no matter what style he was playing. Only a few guys could do that.

In the ’80s, Hiram was everywhere: jamming onstage with David Sanborn’s band, in the studio with Donald Fagen, on TV with the Letterman band, playing in the clubs with Jaco or Gil Evans. Each situation was different, demanding totally different things from the guitarist. And in each situation, Hiram did it effortlessly, sounding completely right, sounding completely like Hiram, wearing spandex tights, and no shoes! I’m sure there were more than a few guitarists, newly arrived to New York, who had the mess scared out of them because they innocently wandered into a club to witness Hiram running through the audience with his wireless guitar, blazing a solo that most cats couldn’t play standing still. One time, I saw Hiram, during his solo, run completely out of the club to play three choruses in the middle of the street, taxis whizzing by and all!

Hiram could seem a little distant, a bit hard to reach when you first met him. Also, the recreational drug thing could place a hazy film over his personality at times. But because I was listening to the notes, I was always certain that there was an amazing, deep person under that indifferent New York surface. One of the hugest blessings in my life was finally getting to discover, in person, the Hiram that I’d been hearing through his guitar all those years. He had cleaned himself up and was playing in my group in the ’90s. We spent time in airports, on buses, at soundcheck, etc., talking about everything: music, politics, race, whatever. I count Hiram as one of the people in my life who caused me to grow and to challenge the limits of my preconceptions. Watching Hiram be so completely committed to being himself made me determined to figure out who I was.

The last time I saw Hiram, we promised each other to meet up at Columbia University where we each had kids as students, which was pretty deep, considering it seemed like just yesterday that we were college-age ourselves. But whenever I start to get sad over the loss of Hiram, I simply remember his crazy ass, running up to the mezzanine section of a concert hall in France, climbing over the railing and standing on a section of air-conditioning duct (which could have given out at any moment), playing his butt off, completely in the moment, completely in his glory, completely oblivious to the danger, completely Hiram. I laugh, and give thanks for his never-dying spirit.

Meghan Stabile, an innovative jazz promoter, producer, organizer, curator, and advocate who proudly adopted the New York Times’ description of her as a “modern impresario,” … END_OF_DOCUMENT_TOKEN_TO_BE_REPLACED

Grachan Moncur III, a trombonist and composer who forged a unique identity in the “new thing” of 1960s jazz, died in his longtime home city … END_OF_DOCUMENT_TOKEN_TO_BE_REPLACED

Charnett Moffett, a bassist and composer whose virtuosity on both electric (often fretless) and acoustic instruments was matched by his versatility, died April 11 at … END_OF_DOCUMENT_TOKEN_TO_BE_REPLACED

Ron Miles, a cornetist, composer, and educator who became a revered and innovative figure in jazz while maintaining a career in the far-flung state of … END_OF_DOCUMENT_TOKEN_TO_BE_REPLACED