Skip to content
Become a member and get exclusive access to articles, live sessions and more!
Start Your Free Trial
Home > Features > Herb Ellis Dies at 88 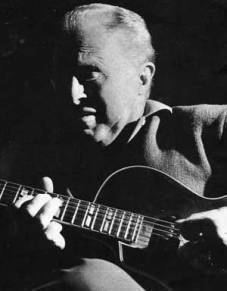 Herb Ellis, a guitarist whose smart, bluesy style was a consistent presence in jazz for more than half a century, died Sunday, the AP reports. He was 88. The cause of death was complications related to Alzheimer’s.

Ellis’ playing presented an accessible, warm-toned ideal in jazz guitar. A player of the post-Charlie Christian generation that sought to emulate horn players with round, fluid, single-note lines, Ellis eventually became a fairly distinctive stylist by balancing common elements: He was adept in bebop, capable of the filigreed mastery associated with colleagues like Joe Pass or Barney Kessel, yet he always conveyed the blues and pulled frequently from its vocabulary (though not to the extent of, say, Kenny Burrell). And, like many players of his era, his sense of swing was indomitable.

Ellis also straddled audience lines, being highly revered by jazz’s self-referential guitar community-his playing in guitar duos and trios was some of his best-but also contributing impressively to the music at large. His breakthrough gig was a five-year run in the Oscar Peterson Trio in the mid-1950s, during which he proved a perfect complement to the piano virtuoso’s lilting, relentless swing, taking breakneck solos and providing rhythmic grounding with powerful comping and percussive effects. His recording credits are long, varied and historic, and include albums with Louis Armstrong and Ella Fitzgerald, Dizzy Gillespie and Stan Getz, Billie Holiday, Screamin’ Jay Hawkins, Mahalia Jackson, Illinois Jacquet and Blossom Dearie. Digging through his discography yields plenty of treasures, some curious: Pull off the shelf guitarist Mel Brown’s 1967 Impulse! debut, Chicken Fat, an essential disc for rare-groove fans, and you’ll find Ellis playing supremely funky solos and accompaniment on 12-string guitar.

Born in Texas in 1921, Ellis attended North Texas University before its prestigious jazz-guitar program existed, and played in the Jimmy Dorsey band in the mid-1940s. With other Dorsey band members, pianist Lou Carter and bassist Johnny Frigo, he formed the Soft Winds, a drummer-less trio compared at the time to Nat “King” Cole’s band. “Detour Ahead,” a tune whose composition is credited to Ellis, Frigo and Carter, was later covered by vocalists including Holiday, Mark Murphy, Jackie Paris and Jane Monheit. The group broke up in 1950 but reformed in the mid-1990s for performances and an album with Frigo on violin and Keeter Betts on bass.

Oscar Peterson hired Ellis at the recommendation of Kessel-whom Ellis was replacing-in 1953, and the Peterson Trio with Ellis and bassist Ray Brown toured as a fixture in producer Norman Granz’s Jazz at the Philharmonic programs. Following his tenure with Peterson he toured and recorded with Fitzgerald, and by the mid-1960s was working as a session player in Los Angeles, where he played in a number of variety- and talk-show bands. (Throughout his career Ellis found comfortable ground between straightahead jazz and commercial settings; indeed, he had a knack for turning kitsch into hearty swing. Take, for example, his rendition of “The Flintstones Theme” with Brown.)

As a leader Ellis produced a string of highly recommended recordings for Verve in the 1950s and ’60s, including a collaboration with a pre-Free Fall Jimmy Giuffre, a tribute to Charlie Christian, and a star-laden date produced by Granz, 1958’s Nothin’ But the Blues. (The personnel is a mid-century dream team including Gillespie, Roy Eldridge, Brown, Coleman Hawkins and Getz.) In the 1970s he began a long and fruitful relationship with the then-nascent Concord Jazz label, releasing reliably swinging albums comprising blues and standards. Ellis seemed to have a particular affinity for duos and trios with other bop- and blues-based guitarists, including Pass, Kessel and Tal Farlow. He formed the super-group Great Guitars with Kessel and Charlie Byrd in 1973.

More recently, Ellis recorded two albums with the jazz and blues guitarist Duke Robillard, Conversations in Swing Guitar (1999) and More Conversations in Swing Guitar (2003). On both sessions, as with his other great six-string tandems, Ellis quickly worked into an airy, simpatico rapport, comping resolutely and balancing fleet solos with in-the-pocket blues statements.

Robillard, who lauded Ellis as a player and a person earlier today, remembers being intimidated prior to the sessions for Conversations. But Ellis quickly diffused his trepidation. “After the first song,” Robillard remembers, “he said, ‘You can’t just put any two guitar players together and it’ll sound like this.’ And that totally put me at ease, right away.

“He was very encouraging to me,” Robillard continued. “It’s a memory that I’ll never forget, playing with him.”

Ellis is survived by his wife, Patti; a son, Mitch; his daughter, Kari Ellis Yedor; and three grandchildren.

Meghan Stabile, an innovative jazz promoter, producer, organizer, curator, and advocate who proudly adopted the New York Times’ description of her as a “modern impresario,” … END_OF_DOCUMENT_TOKEN_TO_BE_REPLACED

Grachan Moncur III, a trombonist and composer who forged a unique identity in the “new thing” of 1960s jazz, died in his longtime home city … END_OF_DOCUMENT_TOKEN_TO_BE_REPLACED

Charnett Moffett, a bassist and composer whose virtuosity on both electric (often fretless) and acoustic instruments was matched by his versatility, died April 11 at … END_OF_DOCUMENT_TOKEN_TO_BE_REPLACED

Ron Miles, a cornetist, composer, and educator who became a revered and innovative figure in jazz while maintaining a career in the far-flung state of … END_OF_DOCUMENT_TOKEN_TO_BE_REPLACED