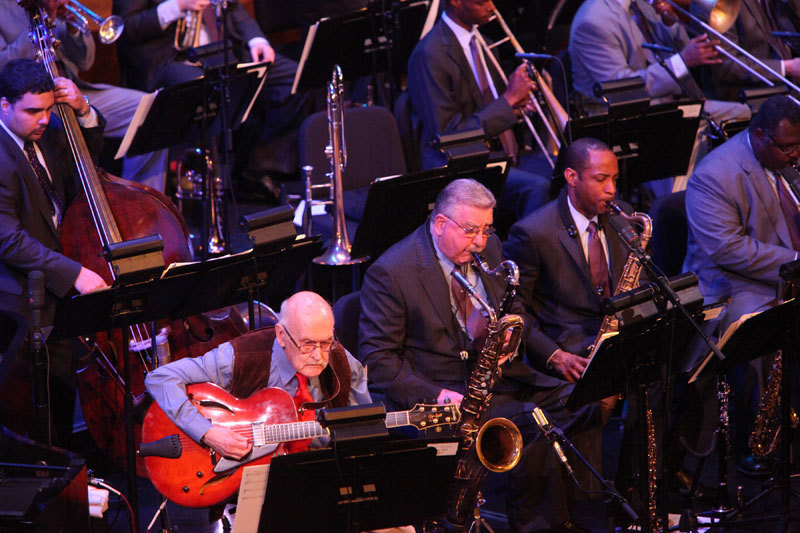 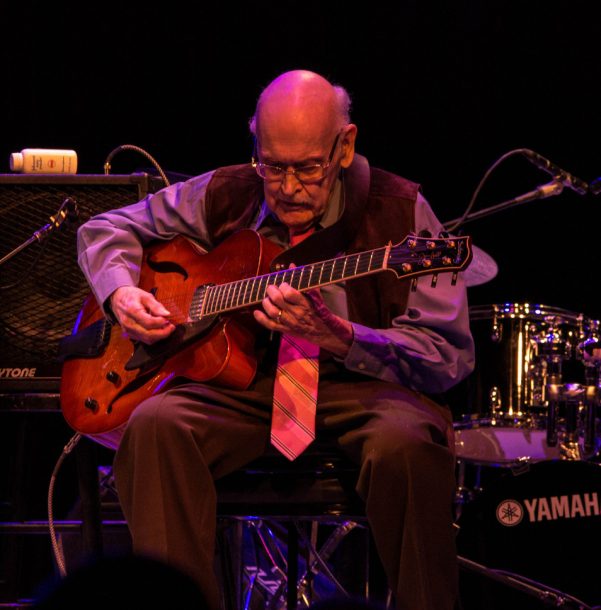 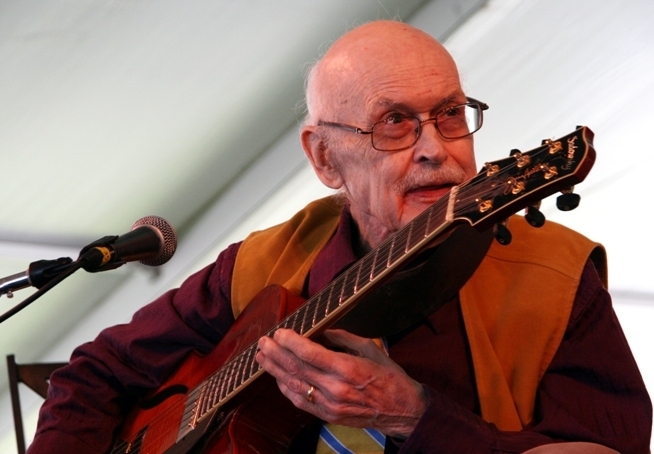 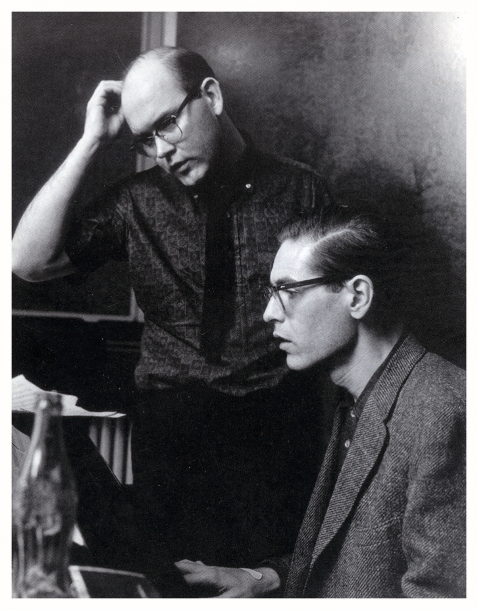 Jim Hall, one of the most influential, creative and admired guitarists in the history of jazz, died today, Dec. 10, according to several news sources. Hall had just turned 83 on Dec. 4. He died of heart failure in his Greenwich Village apartment after a short illness.

From the beginning of his career in the mid-1950s, the prolific Hall-as a leader and as collaborator with a wide range of artists-proved one of the least predictable, most exploratory guitarists in jazz. He is often credited with modernizing the role of the instrument and expanding its vocabulary, bringing a nearly orchestral depth to jazz guitar. His improvisational skills were unmatched, and although he was largely a minimalist who loved a strong melody, his solos were marked by a sophisticated experimentalism nonetheless. Hall also won praise for his compositional and arranging skills.

Hall was once quoted as saying, “Players should force themselves to hear something and then play it, rather than just do whatever comes under their fingers. I try to make my playing as fresh as possible by not relying on set patterns.”

He was said to have been influenced as much by pianists and saxophonists as by other guitar players, and indeed his collaborations with Bill Evans and Sonny Rollins were among his most highly touted. One of his earliest gigs was with the drummer Chico Hamilton, who preceded him in death by just more than two weeks.

James Stanley Hall was born Dec. 4, 1930 in Buffalo, N.Y. He came from a musical family and, after moving with his family to Cleveland, began playing guitar at age 10, turning professional by his teens. He tried his hand at piano and bass as well as guitar, but it was the latter instrument that took hold. He concentrated on classical guitar initially-and that training informed his playing thereafter-but hearing the guitar playing of Charlie Christian turned him toward jazz. After studying music theory at the Cleveland Institute of Music, Hall moved to Los Angeles. He joined Hamilton’s quintet in 1955, followed by a stint with the Jimmy Giuffre Three, with whom he recorded several albums between 1957 and 1959.

As a leader, Hall first recorded for the Pacific Jazz label in 1957; that album, simply titled Jazz Guitar, largely comprised standards and provided a solid, if understated, introduction to Hall’s style of playing. That album was followed by Good Friday Blues: The Modest Jazz Trio with Red Mitchell (piano) and Red Kelly (bass) in 1960, for Liberty/Pacific, and It’s Nice to Be With You: Jim Hall in Berlin with Jimmy Woode (bass) and Daniel Humair (drums) in 1969 for MPS.

In 1971 he cut Where Would I Be? for Milestone. That was followed by albums for Verve, A&M, CTI, Concord, Music Masters, Telarc and, most recently, ArtistShare.

After moving to New York in the early ’60s, Hall led a trio with pianist Tommy Flanagan and bassist Ron Carter, with whom Hall later recorded the duets albums Alone Together and Telepathy. In the ’70s, Hall recorded with pianist George Shearing and classical violinist Itzhak Perlman, as well as with Ornette Coleman (those tracks remained unreleased for a decade) and with flugelhornist Farmer. The album Concierto (CTI), in 1975, featured Chet Baker (trumpet), Desmond (alto saxophone), Sir Roland Hanna (piano), Carter (bass) and Steve Gadd (drums). Hall also worked on television, in the house band for The Merv Griffin Show.

Hall continued to record and perform until recently. In 1986, he worked in a trio setting with pianist Michel Petrucciani and saxophonist Wayne Shorter. His later albums included a duets set with Pat Metheny, several live recordings, collaborations with Joe Lovano (with whom he led a quartet in the late ’90s), Bill Frisell, Joey Baron, Larry Goldings and others. He cut the solo album Dedications & Inspirations in 1993 and, in 2001, Jim Hall & Basses, which found him working alongside Dave Holland, Christian McBride, Charlie Haden, George Mraz and Scott Colley. Hallmarks, released in 2007 by Concord, was a double-CD compilation covering 30 years.

Hall taught at the New School for Jazz and Contemporary Music during the 1990s. A documentary film, Jim Hall: A Life In Progress, told primarily in Hall’s own words, was released by Rhapsody Films in 1999.

In 1997, Hall won the New York Jazz Critics Circle Award for Best Jazz Composer/Arranger. He was awarded an NEA Jazz Masters Fellowship in 2004.

The following is an official statement from the family of the late Elvin Jones, received at the JazzTimes office earlier today, December 14. The family … END_OF_DOCUMENT_TOKEN_TO_BE_REPLACED

David Ornette Cherry, a multi-instrumentalist, composer, and poet who worked to merge the jazz tradition with classical and various African and world music traditions, died … END_OF_DOCUMENT_TOKEN_TO_BE_REPLACED

Mick Goodrick, a guitarist and teacher who was arguably the most influential guitar pedagogue in the history of jazz, died November 16 at his home … END_OF_DOCUMENT_TOKEN_TO_BE_REPLACED

Terry Woodson, a trombonist, arranger, librarian, copyist, conductor, and record producer, passed away on October 19. A graduate of the University of Tulsa, he joined … END_OF_DOCUMENT_TOKEN_TO_BE_REPLACED