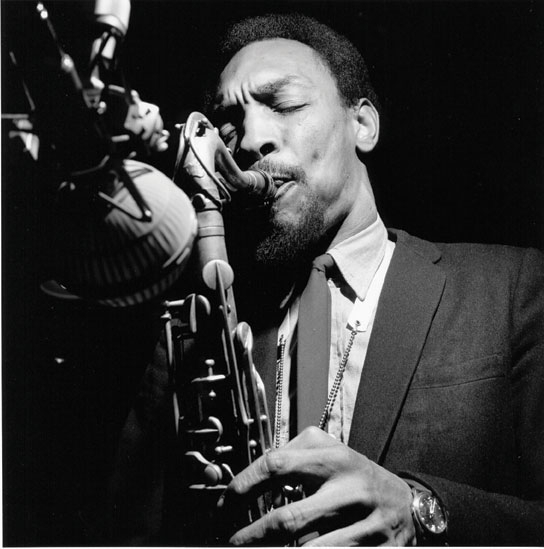 As a person, Sam Rivers was warm but wryly critical. He didn’t criticize anybody outright, but he let it be known what he was and wasn’t into. As a player, he’s been dismissed as being sloppy or slipshod, but the cat was a technical genius. I marveled at the way he was able to conjure the wildest configurations from very simple structures on the saxophone. He was like an architect, in that he would start with the foundation and then build up from there. It was very vertical, the way he played. And he brought two disparate elements together-his playing was very intellectual and also very raw. He could be the brainiest and yet the most basic at the same time. You definitely hear the roadhouse element in his playing. He was like the master of grace and fire.

As a composer, Sam was a sterling representation of the artful merging of craft and logic with art-mood and feeling and space. All of those elements that would prod and catapult the musicians along were like the mortar that held the bricks of his songs together, and you had to rely upon every access point that you had to negotiate within that. You know, you can’t navigate a Sam Rivers song with standard bebop licks. You have to be really in the moment and know how to alter and modify your material on the spot. And his compositions just provided a blueprint of how to do it. It was like a deliberate formatting of logic and reason combined with all of the human elements that are sorely missing in a lot of left-brain-style music today. Some things can become so highbrow and so removed from the earth. Sam had no issues with that.

Playing Sam’s music [as a member of the Rivbea All-Star Orchestra on 1999’s Inspiration and 2000’s Culmination] was very, very challenging. He didn’t have designated solos; he would just point at people based on what he felt was appropriate for the moment. He knew how to manipulate all of the elements into something that in less-capable hands would be a total disaster. If you want to know how to conjure up intricacy within looseness, you have to refer to Sam Rivers.

I was exposed to Sam’s music early on, but a lot of it got by me because young ears had to mature. My attitude was, “This is wild and it’s unrefined and he has bad technique.” I couldn’t hear it and would dismiss it. So I had to grow into Sam Rivers. And I owe a lot of that to Steve Coleman, because he turned me on to Sam and Von Freeman at about the same time. Initially, I was like, “Get that out of here. I can’t use it at all.” But Steve kept singing their praises and saying, “Man, you don’t know what you’re missing.” The record that finally grabbed me was Miles in Tokyo. Sam was on that tour, and to me he pretty much just annihilated the whole band. And I think it was a general disservice to the music community that Miles wasn’t visionary enough to hear that Sam was on to something very unique. Music would be different now if Sam would’ve continued to have that platform. Because what he was doing was so deliberate and so advanced that many people still haven’t caught up to it. Only a few of Miles’s saxophone players have ever dealt on that level. Hearing Sam in that band, it really took my breath away.

Years later, when I produced Jason Moran’s Black Stars, which Sam played on, it shocked us all when he played piano and then he ran to the horn. It just blew our minds because nobody knew he played piano like that. He was a serious pianist-arranger-composer-multi-instrumentalist-conceptualist-leader-sage-soothsayer. And I would dare offer that he was underappreciated. I know none of my young charges and students and protégés are really aware of him. All they know is he’s the guy who wrote “Beatrice.” But Sam was a hugely important figure in the history of this music. I’m all about underdogs and unsung heroes and the periphery characters who influence legions of other more prominent players. He was one of those people.

Meghan Stabile, an innovative jazz promoter, producer, organizer, curator, and advocate who proudly adopted the New York Times’ description of her as a “modern impresario,” … END_OF_DOCUMENT_TOKEN_TO_BE_REPLACED

Grachan Moncur III, a trombonist and composer who forged a unique identity in the “new thing” of 1960s jazz, died in his longtime home city … END_OF_DOCUMENT_TOKEN_TO_BE_REPLACED

Charnett Moffett, a bassist and composer whose virtuosity on both electric (often fretless) and acoustic instruments was matched by his versatility, died April 11 at … END_OF_DOCUMENT_TOKEN_TO_BE_REPLACED

Ron Miles, a cornetist, composer, and educator who became a revered and innovative figure in jazz while maintaining a career in the far-flung state of … END_OF_DOCUMENT_TOKEN_TO_BE_REPLACED