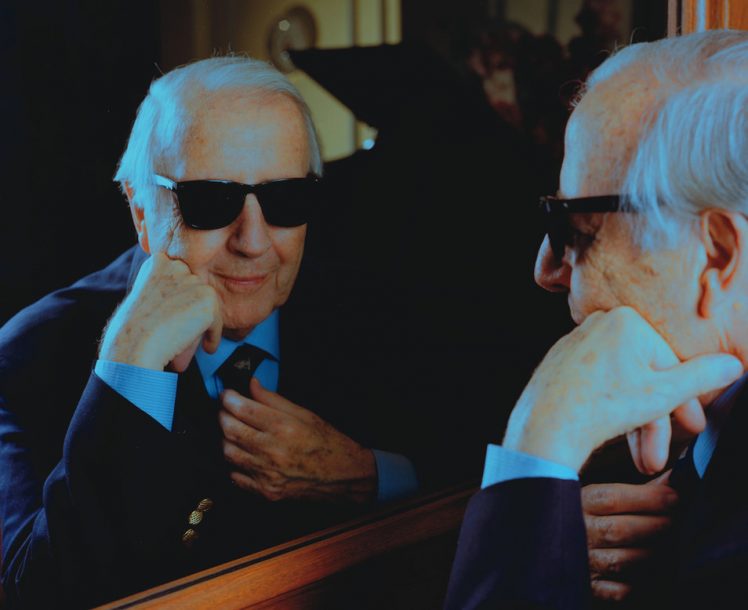 The first time I heard George Shearing I was four years old. I lived with my parents at 4000 South Prescott Street in Memphis, Tennessee. My father, Marvin Wolff, was a physician, and an amateur musician with perfect pitch. He played piano, clarinet, and recorder. He was raised in Indianola, Mississippi, where B.B. King, Albert King, and Muddy Waters all grew up. He grew up listening to the delta blues, picking cotton in the summers, and sneaking into concerts by Count Basie and Duke Ellington.

We used to sit in a small room that contained his record player, and he would play me records by his favorite musicians. At that time his favorites were Ray Charles, Oscar Peterson, Count Basie, and George Shearing. I learned to recognize each of these musicians’ music, and always referred to Shearing and Charles as “the blind guys.” I was say to my father, “Play me the blind guys, Dad.”

I loved the way Ray Charles played the piano and organ and sang so soulfully, and I loved the crystalline, light and swinging touch of George Shearing at the piano. There was something in both of their playing that moved me beyond anything else I’d heard, and they continue to move me to this day.

George Shearing became famous with his hit song, “September Song,” utilizing his quintet with vibes and guitar playing the melodies and swinging ensemble sections along with Shearing’s block chords style, apparently garnered from pianist Milt Buckner. I loved that full, two handed sound that Shearing employed, and the way that sound contrasted with his light single note right hand solo technique. Every note was clean and clear and singing and crisp. And he always swung.

In 1963 Shearing made a trio album with Ahmad Jamal’s rhythm section, consisting of Israel Crosby on bass and Vernel Fournier on drums. The album is called Jazz Moments, and it had a huge effect and influence on me as a jazz pianist. (It also happened to be the last album Israel Crosby ever made.) I love the way Shearing plays these songs on Jazz Moments, and the way he interacts with this swinging rhythm section. He allowed himself to be looser than the way he played with his regular quintet, to stretch more and not be confined by playing the melodies in lock step with vibes and guitar.

George Shearing is immediately recognizable by his touch. It is light and clear and warm and easy. Whether he’s playing block chords, double octaves, single notes, or a Bach prelude and fugue, George Shearing touches the piano like no one else. Coming from the tradition of beautiful technical jazz pianists such as Teddy Wilson and Art Tatum, Shearing also displays his classical music background in the clear and clean way he approaches the piano.

I was lucky to have the opportunity to hear George Shearing live many times since I was four years old. After my family moved to Berkeley, California in 1961 (in order for my father to go back to school and become a psychiatrist), we went to the Mondavi winery in Napa Valley and heard George Shearing perform for a Sunday afternoon picnic audience. We were seated pretty far in the back, but Shearing’s sound soared over the crowd and mesmerized even those in the audience who had sampled quite a bit of the local wine.

The most exciting experience I had with George Shearing was on Valentine’s Day in 1968. My parents were friends with a group of couples that got together and had house parties every couple of months. We kids would go outside and play, and the grown-ups would gather around a piano with their drinks and sings show tunes and standards that were played by their good friend Wendell Oty, who was dean of the music school at San Francisco State College.

He and his wife, Shan, who was a costume director in the drama department at the University of California in Berkeley, had a beautiful Berkeley craftsman house in South Berkeley. They had two pianos in the living room, and on this Valentine’s day they invited the usual crew to come over and hang out. The difference being that this time George Shearing was one of the guests, along with young pianist Peter Mintun, a guy who was a little older than I was, but was already an accomplished jazz pianist, with an expertise in stride piano. I was around 15 or 16 at the time, and was developing a more modern style of piano playing. I was very influenced by Bill Evans, Herbie Hancock, Chick Corea, McCoy Tyner, and Keith Jarrett.

Peter Mintun played some piano, then I played a little piano. Then George Shearing sat down and played the most beautiful solo version of “My Funny Valentine.” I was so young I don’t think I was able to realize how magical that experience was and how lucky I was to spend the time in Shearing’s company playing music.

Over the years I heard George Shearing in a variety of settings, most often playing duo with wonderful bassists such as Brian Torf. Shearing was able to stretch out more, and actually did some singing as well. I of course preferred his piano playing to his singing.

One exciting night I was at the Village Vanguard in New York City, listening to Carmen McCrae perform. She had recently recorded an album featuring George Shearing accompanying her, and he was in the audience. She had him sit in, and man, he burned down the house. That light, feathery touch just smoked some bebop solos. He lit the room up.

The last time I heard George Shearing live was at a jazz club in midtown New York around eight years ago. He played with a trio, and though he was a little less forceful than in his younger years, he still swung and played with his beautiful touch.

George Shearing has been a part of my musical consciousness since I became conscious of listening to music. Not only in his own playing, but in the way he influenced so many of the other pianists I have listened to over the years, particularly Bill Evans and Herbie Hancock. I now and then use the block chords technique, though sometimes up 1/2 step from the harmony of the chord I’m playing on in order to create some harmonic tension. I refer to George Shearing’s playing often, and am comforted that I will be able to have him live on with me on his records, and in my memory of all the wonderful concerts I was lucky enough to hear him play.

Meghan Stabile, an innovative jazz promoter, producer, organizer, curator, and advocate who proudly adopted the New York Times’ description of her as a “modern impresario,” … END_OF_DOCUMENT_TOKEN_TO_BE_REPLACED

Grachan Moncur III, a trombonist and composer who forged a unique identity in the “new thing” of 1960s jazz, died in his longtime home city … END_OF_DOCUMENT_TOKEN_TO_BE_REPLACED

Charnett Moffett, a bassist and composer whose virtuosity on both electric (often fretless) and acoustic instruments was matched by his versatility, died April 11 at … END_OF_DOCUMENT_TOKEN_TO_BE_REPLACED

Ron Miles, a cornetist, composer, and educator who became a revered and innovative figure in jazz while maintaining a career in the far-flung state of … END_OF_DOCUMENT_TOKEN_TO_BE_REPLACED