Skip to content
Become a member and get exclusive access to articles, live sessions and more!
Start Your Free Trial
Home > Features > Farewell: U. Shrinivas 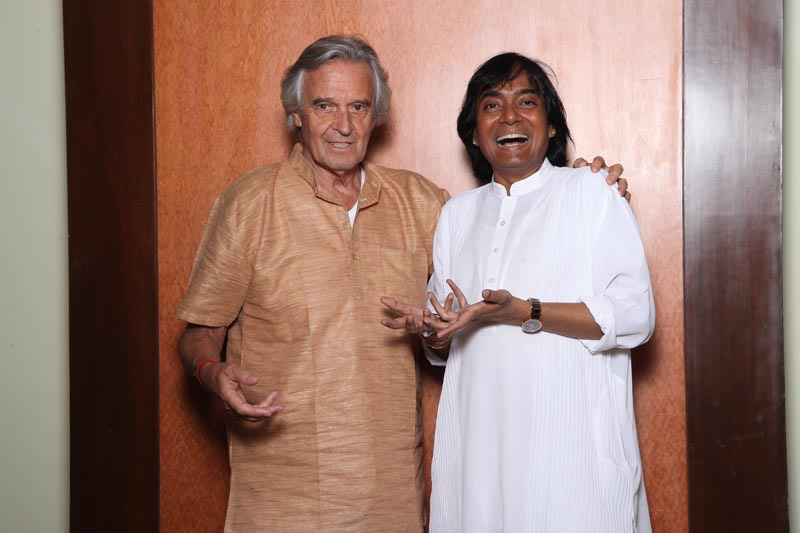 U. Shrinivas (right) with John McLaughlin in 2014

I first saw Shrinivas when he was 14. He was mature well beyond his actual age. I had the distinct impression that he’d been here on Earth many times before. He had a look in his eyes that was at once totally pure and suggested there was nothing he hadn’t seen in some other time. He had been a star in India since he was 7 years old and I can truthfully say he blew my mind when I first saw him. He was playing pure Carnatic music on an electric mandolin plugged into a Fender Twin Reverb. It was unbelievable, and I knew right away I had to play with him one day.

That was in 1983. Then, in 1997, Zakir Hussain and I tried to reunite the original Shakti group with L. Shankar and Vikku Vinayakram for a tour of the U.K. We were unable to find Shankar, so we invited flutist Hariprasad Chaurasia to replace him. The tour was a phenomenal success, especially musically. Zakir and I decided to continue playing together, and Remember Shakti was born. I suggested inviting Shrinivas to replace the unfindable Shankar, since Hari-prasad is older and not too keen on touring the way we do. From the first note it was just amazing. It was like he’d been made for Shakti. He grew up listening to Shakti, so in a sense it was all there from the start.

Shrinivas’ instrument and mine were made for each other. They were like elder and younger sisters. He added a highly distinctive sound to our group, which, prior to him, had featured a violin. He already had a mastery of rhythmic and melodic expression that I heard when he was 14, so the demands on me were in a way even greater than when Shankar was in the group.

He had a great sense of humor and would laugh at the silliest jokes. One time we were on tour, playing in the extreme southwest of the U.K., and frankly the audience didn’t have a clue about what we were doing. There were some very strange facial expressions in the audience, and I started imitating them onstage, which was very irreverent on my part. Shrini started laughing and couldn’t play anymore, but I kept imitating the strange expressions and then the whole band just fell apart laughing. From that point on, every day Shrini would come to me and ask me to “please make the funny faces,” and off he would go laughing his head off.

Shrini was like an angel come to Earth to share his light and affection with his fellow musicians. We would speak about the ways of enlightenment, especially the ways in India and the ancient traditions toward enlightenment. He was a beautiful soul, and my life is blessed to have a part of his.

Meghan Stabile, an innovative jazz promoter, producer, organizer, curator, and advocate who proudly adopted the New York Times’ description of her as a “modern impresario,” … END_OF_DOCUMENT_TOKEN_TO_BE_REPLACED

Grachan Moncur III, a trombonist and composer who forged a unique identity in the “new thing” of 1960s jazz, died in his longtime home city … END_OF_DOCUMENT_TOKEN_TO_BE_REPLACED

Charnett Moffett, a bassist and composer whose virtuosity on both electric (often fretless) and acoustic instruments was matched by his versatility, died April 11 at … END_OF_DOCUMENT_TOKEN_TO_BE_REPLACED

Ron Miles, a cornetist, composer, and educator who became a revered and innovative figure in jazz while maintaining a career in the far-flung state of … END_OF_DOCUMENT_TOKEN_TO_BE_REPLACED