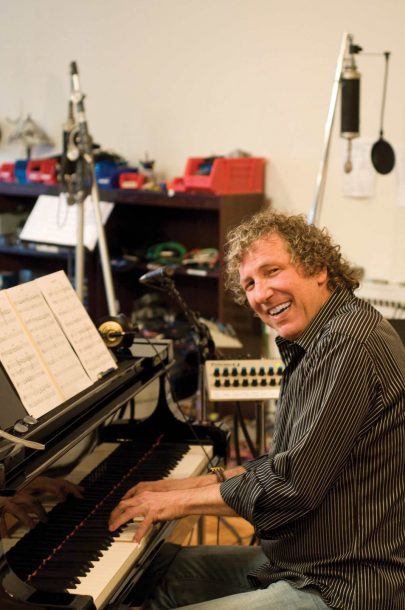 Bob had total confidence in his unusual ideas. There weren’t a lot of jazz musicians doing pop music the way Bob wanted to do it when he pitched [recording an album of jazz interpretations of] the music of Sting. It wasn’t copping out and doing covers; it was new versions in a new way. I learned so much from him about everything because of that attitude-arranging, producing, planning projects, thinking about what I’d like to do and then figuring out how to do it.

There was an extreme irreverence in his whole outlook on life and that really helped him with everything he did. A lot of that irreverence was corny jokes and making fun of things that perhaps weren’t politically correct and catching people off-guard. But not in a weird way, just in a let’s have fun and anything goes way. On soundchecks he used to play TV theme songs like Gilligan’s Island and The Andy Griffith Show and McHale’s Navy. So [when he was in the hospital] I played all of his favorite TV show themes, just in case he could hear because you never know if people in that condition can hear or at least feel the cosmic sound vibrations.

But I also had many serious talks with him. There were times when he was very reflective and there wasn’t that humor at all. He was a very sensitive person, [especially] in the studio or on gigs.

I first met Bob when I came to New York in the mid-’80s. Jim Powell, the trumpet player, used to call me to sub with Mel Lewis’ band. One night I came in and Bob was there but I had never heard of Bob. I didn’t know him and he played this incredibly wild tenor solo on “Interloper,” one of Thad Jones’ charts that they opened the first set with. He was an incredible tenor player. I’d never heard anything like it before. When Mel introduced him I didn’t really catch the name and on the break I remember John Mosca, the trombone player, came up to this guy and said, “Hey, Bob, it’s nice to see you. You haven’t been down here in awhile.” And Bob said, “Yeah, there’s too many trombone solos.” To Mosca, a trombone player! Then two years later he called me-I think it was in the winter of 1988. I’d been recommended by Jim Powell. I still didn’t know the name. I didn’t connect it with that Mel Lewis incident. We talked for a couple of hours about music-Miles and Trane and North Texas University. Then in December of ’88 he was putting a band together for his Treasure Island album and he asked me if I wanted to be a part of it. I said of course. When I walked into the first rehearsal I thought, oh, this is the cat that made that comment about the trombone solos. This is where I want to be.

(Ed. Note: Belden gave up tenor saxophone at some point during his career to concentrate on soprano. He also began working with small ensembles in addition to big bands.)

I asked him early on, “You’re an incredible tenor player. Why are you with a big band?” He said, “There are so many tenor players out there”-and I know he was referring to [Dave] Liebman and [Joe] Lovano-“and I need to attract attention to myself by having a big band. Then when I get that attention I’m going to whittle it down to a small group,” which is what happened. We did all these records as a big band backing up all these different Blue Note artists and then his own records. Then all of a sudden it was different people. I walked into a session and it was seven pieces.

(Ed. Note: Belden and Hagans formed the band ANIMATION in the late ’90s.)

Bob and I, in the late ’90s, started listening to the British underground, drum ‘n’ bass, and started talking about combining that with a live drummer, Billy Kilson, and grooves that had some kind of harmonic thing. Most of the drum ‘n’ bass things you couldn’t even tell the tonality on a lot of that.

We pitched ANIMATION to Bruce [Lundvall at Blue Note] in ’98 and Bruce wanted to know exactly what we were going to do and we couldn’t answer. We had no idea. We said we were going to commission some DJs to program some grooves and we’re gonna play free over it and we’re not gonna really overdub anything. Bruce said, “Of course, do it, but I have no idea what you’re gonna do.” I remember walking out of the office and Bob said, “This is like Seinfeld-it’s a record about nothing.” So we had five days in the studio and we just experimented. Later on, I was the artistic director for the Norrbotten Big Band in Sweden for 15 years and I actually combined the ANIMATION band with the big band on some projects. It was groove-oriented with electronics. It wasn’t swing. It turned into a weird funk band. Things like that made me think totally free and that anything was possible, how, even as a trumpet player, I could incorporate some of Bob’s phrasing and shadings-not so much the notes he played but the vibe.

Bob was, of course, a Miles freak and the world’s ultimate expert and in a way, I always thought when I was playing with Bob that he was like Miles-even though he was a saxophone player. And I was kind of the perfect sideman for Bob in his concepts, like Wayne or Trane were. Not that I’m putting myself at that level, but he was really like Miles-visionary. He’d set up the whole vibe and without saying a word I, the sideman, knew exactly what to do, just by the communication we had. It always felt like we had that thing but he was definitely the leader and the cat that set everything into motion and that left me free to do what I wanted to do.

Tim Hagans is a trumpeter, composer and arranger. He worked with Bob Belden on numerous projects. Belden passed away suddenly May 20 at age 58.

The following is an official statement from the family of the late Elvin Jones, received at the JazzTimes office earlier today, December 14. The family … END_OF_DOCUMENT_TOKEN_TO_BE_REPLACED

David Ornette Cherry, a multi-instrumentalist, composer, and poet who worked to merge the jazz tradition with classical and various African and world music traditions, died … END_OF_DOCUMENT_TOKEN_TO_BE_REPLACED

Mick Goodrick, a guitarist and teacher who was arguably the most influential guitar pedagogue in the history of jazz, died November 16 at his home … END_OF_DOCUMENT_TOKEN_TO_BE_REPLACED

Terry Woodson, a trombonist, arranger, librarian, copyist, conductor, and record producer, passed away on October 19. A graduate of the University of Tulsa, he joined … END_OF_DOCUMENT_TOKEN_TO_BE_REPLACED