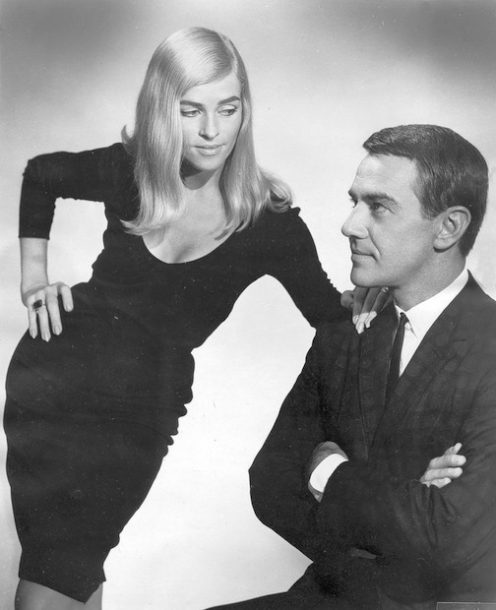 While still in my teens in the 1970s, discovering the world of cabaret and jazz singing, I very quickly found out about Jackie and Roy [Kral, Cain’s husband and music partner for more than a half-century]. At the time, I was intent on being sophisticated, and Jackie and Roy were part of my self-indoctrination into everything I considered smart, superior and hip. I went on a tear, collecting all their then out-of-print albums. I knew by the nature of what they sang-material by Fran Landesman, Bob Dorough, Bart Howard, Alec Wilder and other cultish songwriters-and by their hip treatments of songs by Rodgers and Hart, Irving Berlin, etc., that this was something you had to be pretty smart to appreciate.

And their sound swung. It had a wonderful breeziness and vivacity. Jackie’s voice was simply beautiful. It was a rare voice in jazz. It wasn’t battered, nor was it an unfeeling voice that was trying too hard to emulate an instrument. She phrased beautifully, and she thought about what she was singing. The sound was translucent, liquid, effortless and perfectly in tune. When she sang with Roy, it was clear that these two people were meant for one another. They harmonized some, but mostly they sang in unison an octave apart. Their sound had that special blend you usually hear in sibling harmony singing. In those cases, it’s in the genes. Here it was an instance of two people who resonated together, personally and musically, on a deep level.

In 1981, Jackie and Roy came to Lehman College in the Bronx, not far from Fordham University, where I was studying. I was in heaven. It was easy at Lehman to go backstage. I breathlessly accosted them, which they surely weren’t used to! Not long after that, I began writing my cabaret book [Intimate Nights: The Golden Age of New York Cabaret]. I asked them for an interview and they were very accessible, inviting me to their house in Montclair, N.J. That meeting blossomed into a friendship that lasted until Roy died in 2002 and until Jackie died last fall. My evenings at their home always consisted of my bringing some music I wanted them to hear. We’d sit around the stereo and I’d luxuriate in the fact that I was with two of my idols who had let me into their lives. When I launched the cabaret book with a show at the Algonquin, Jackie and Roy were there. Jackie sang “While We’re Young” while Roy played. When I launched my Chet Baker book in 2002 [Deep In a Dream: The Long Night of Chet Baker], very close to the time Roy died, again they were there and performed.

After Roy’s death, Jackie lost half of herself. For the next five years she’d do the odd singing appearance, but had no personal drive to hustle gigs. In 2007, she sang at the annual Alec Wilder memorial concert at St. Peter’s Church. As far as I know, that was her final performance. She never healed from the loss of Roy and, as a result, her health began to deteriorate. It was a very long, slow departure.

Listening to them now, I think, “They made it seem so easy, but this is some hard shit they’re singing.” To sing with another person with such precision and have all the nuances perfectly in sync is truly remarkable. Their music still touches my heart, and my friendship with them will always be one of my most treasured memories.” [As told to Christopher Loudon]

Based in New York, James Gavin is the bestselling author of several acclaimed music biographies, including Deep In a Dream: The Long Night of Chet Baker, Stormy Weather: The Life of Lena Horne and, most recently, Is That All There Is? The Strange Life of Peggy Lee. He has crafted liner notes for dozens of vocal jazz albums including the 1997 CD compilation Jackie & Roy: The ABC-Paramount Years, for which he also served as reissue producer.

Meghan Stabile, an innovative jazz promoter, producer, organizer, curator, and advocate who proudly adopted the New York Times’ description of her as a “modern impresario,” … END_OF_DOCUMENT_TOKEN_TO_BE_REPLACED

Grachan Moncur III, a trombonist and composer who forged a unique identity in the “new thing” of 1960s jazz, died in his longtime home city … END_OF_DOCUMENT_TOKEN_TO_BE_REPLACED

Charnett Moffett, a bassist and composer whose virtuosity on both electric (often fretless) and acoustic instruments was matched by his versatility, died April 11 at … END_OF_DOCUMENT_TOKEN_TO_BE_REPLACED

Ron Miles, a cornetist, composer, and educator who became a revered and innovative figure in jazz while maintaining a career in the far-flung state of … END_OF_DOCUMENT_TOKEN_TO_BE_REPLACED