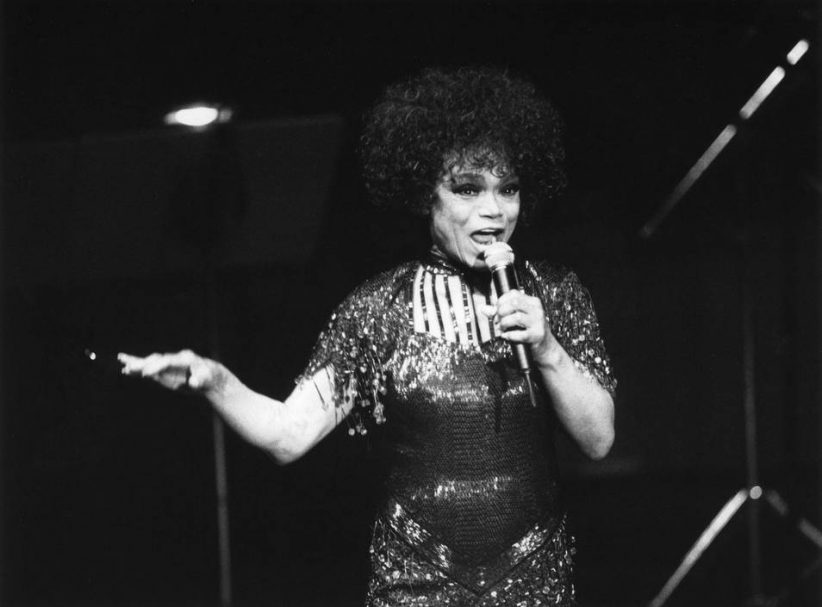 On Dec. 25, 2008, Gabriel blew his horn for the arrival of heaven’s “purrfect angel,” Eartha Kitt. I can’t imagine the fanfare she received from clamoring angels and human spirits—males, of course. In my mind’s eye I can picture God smiling at all the ruckus, but mostly at the fact that his child, Eartha Mae Keith, had arrived on Christmas Day. What a glorious present for Heaven!

On Earth we mourned her passing, as she would no longer be here to seduce us with her siren ways. She “purred” her way into my consciousness in 1967 when she took over the role of Catwoman in the TV series Batman. I sat mesmerized before the television with each episode Eartha appeared in. What a woman! What sex appeal! Great Scott! Shazam!

Of course I knew the legendary “Santa Baby,” “C’est Si Bon,” “Love for Sale” and “Uska Dara,” but I never knew until researching her life that Orson Welles had proclaimed her “the most exciting woman in the world.” Eartha, for me, coined the term “triple threat” and gave true meaning to the definition of “multifarious.” Life was her stage, and she commanded every aspect of it until her untimely death at her home in Weston, Conn. Just Google her to read her vast discography, theater and film credits, three autobiographies and countless awards. Kitt was the master of re-invention.

Eartha (which means “strong faith”) Mae Keith was born Jan. 17, 1927, just three weeks before my own mother, Marion Hale Holliday (Hudspeth). It comes as no surprise to me that this woman—conceived from the rape of her African-American/Cherokee mother, Mamie, by John Kitt, the white son of a plantation owner in South Carolina—managed to transform her dismal beginnings into a sort of fairytale. She was traded off from her birth mother to Anna Mae Riley, then to another family, finally winding up with her birth mother in New York City.

Dance afforded Eartha her first taste of creative freedom under the tutelage of the Katherine Dunham Dance Troupe. Films, recordings, television, cabaret followed … with powerful, wealthy, smitten men in tow. She traveled the world, picking up the French language along the way. C’est magnifique! A second language merely added to her building mystique.

I had the great fortune of seeing and meeting Eartha in Los Angeles at the famous “backlot” cabaret room of the renowned Studio One in 1978. I was accompanied by a close friend, the choreographer Michael Peters. After a breathtaking show, Michael and I met Eartha backstage, with her daughter, Kitt, handling her personal affairs. (My oldest daughter, Tulani Bridgewater-Kowalski, handles mine.)

A second encounter with Eartha took place on April 25, 1999, as we were both part of a star-studded evening honoring Max Roach at Aaron Davis Hall. I remember walking into a backstage room to find her doing dance warm-ups. I was so surprised by her suppleness and concentration it rendered me speechless and I quietly left the room. I don’t think she even realized a door had been opened, or that I stood there gaping at her amazing body and her flexibility!

Eartha was unique, fearless, proud and unyielding. (Remember, she was ostracized after her infamous anti-war statements on Vietnam in 1968.) One can develop such attributes from world travels, being treated with dignity outside of our (un) United States. I was similarly asked to tone down my personal “anti-war” opinions at the outset of the illegal war on Iraq while in Southeast Asia.

In her autobiography Thursday’s Child, she said of her early life in South Carolina, “My first scene in life was a long, dark, dusty road. I could not see the end of it, for it just went down, down, down—to end in what seemed like hell.” She summed up her life in six words: rejected, ejected, dejected, used, accused and abused.

Although I’m sure there was an underlying rage, Eartha Kitt was an amazing actress, as she epitomized for me another set of six words: class, beauty, integrity, sensuality, youthfulness and intelligence. For those of us whose lives she touched, she left the indelible imprint of an ethereal angel.

Charnett Moffett, a bassist and composer whose virtuosity on both electric (often fretless) and acoustic instruments was matched by his versatility, died April 11 at … END_OF_DOCUMENT_TOKEN_TO_BE_REPLACED

Ron Miles, a cornetist, composer, and educator who became a revered and innovative figure in jazz while maintaining a career in the far-flung state of … END_OF_DOCUMENT_TOKEN_TO_BE_REPLACED

Ernie Andrews, a deep-voiced singer who scored a major hit (1945’s “Soothe Me”) when he was still in his teens but remained perennially underrecognized by … END_OF_DOCUMENT_TOKEN_TO_BE_REPLACED

I’ve been playing the organ since I was 10 years old because I love the sound of the Hammond B-3. Once I heard Jimmy Smith … END_OF_DOCUMENT_TOKEN_TO_BE_REPLACED