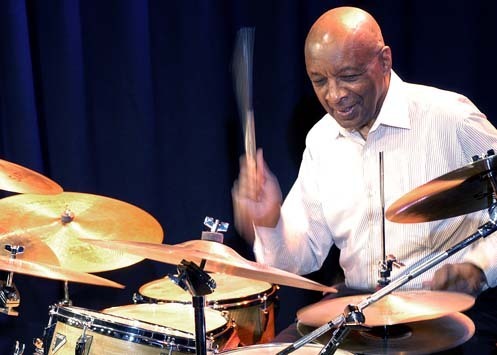 Drummer Ed Thigpen, noted for his brushwork and sensitive accompaniment to pianists as well as vocalists, died yesterday at Hvidovre Hospital in Copenhagen, Denmark, where he had resided for many years. Thigpen was 79.

Although he was born in Chicago, Thigpen was raised in Los Angeles and attended Thomas Jefferson High School, which also produced Dexter Gordon, Art Farmer and Chico Hamilton, amongst many other noted jazz musicians of the ’40s and ’50s. After attending college for a year locally in Los Angeles, Thigpen left to pursue a career in music. He moved to St. Louis where his father Ben, a drummer and veteran of Andy Kirk’s bands, was living. Eventually, like many gifted jazz musicians of that era, he found his way to New York City, where he soon was working with trumpeter Cootie Williams’ band at the Savoy and at shows across the country.

Thigpen also worked with various R&B and swing bands on the road during that period, but by 1954 he was completely immersed in the vibrant jazz scenes of 52nd Street and Harlem in New York City. Among his notable sideman jobs during those halcyon days were Bud Powell, Jutta Hipp, Lennie Tristano and Billy Taylor, with whom he was most closely associated. He also worked with Dinah Washington and Johnny Hodges. As a drummer who could play with intensity yet not overwhelm the soloists with volume, Thigpen was particularly in demand by pianists and vocalists. That reputation led directly to one of his most storied associations, with Oscar Peterson who hired Thigpen for his trio in 1959. Thigpen went on to record about 50 albums with the Oscar Peterson Trio. Many people consider that group with Ray Brown on bass to be one of the finest if not the finest trio of Peterson’s career.

Thigpen left Peterson’s trio in 1965 and although he recorded one album for Verve as a leader during that period, he remained most active as a first-call drummer for various bebop bands. In 1965, he joined Ella Fitzgerald’s working group and by 1967 had settled back in Los Angeles. He performed off and on with Fitzgerald until 1972, when he departed to live in Copenhagen, Denmark.

Although Thigpen would travel and perform all over the world, he remained a resident of Copenhagen until his death. Given the frequency with which U.S. jazz musicians performed in Europe, it could be argued that he had just as much access to the greatest musicians of modern jazz. Indeed, Thigpen played with everyone from Kenny Drew to Clark Terry.

It was in Europe that Thigpen developed his role as an educator and clinician. In addition to writing many instructional books, he taught at conservatories and colleges in Copenhagen and elsewhere in Europe, all the while keeping up an active performance schedule with pianists, singers and his own groups.

Thigpen was often a warm and familiar presence at IAJE conferences, mingling with educators and students and reminiscing with old friends and associates. Always impeccably dressed, Thigpen carried himself like a statesman or ambassador of the music, which in fact he was. That organization gave Thigpen its prestigious Humanitarian award in 2002. He was also honored by the Percussive Arts Society, the Danish Jazz Awards, the Kennedy Center and other international organizations of note. A drum clinician of renown, Thigpen likewise was a regular at the NAMM conference in Anaheim and was a long-time endorser of Remo Drums, Sabian Cymbals and Regal Tip sticks & brushes.

His own recordings as a leader were relatively infrequent for a musician of his stature, but included Out of the Storm (Verve, 1966), Action-Re-Action (GNP, 1974), and #1 (Stunt, 2004). However, the titles of his recordings and instructional videos told plenty about his legacy: Rhythm Brought to Life, Element of Swing, Mr. Taste and The Essence of Brushes. Those titles aptly sum up the man and his music.

Meghan Stabile, an innovative jazz promoter, producer, organizer, curator, and advocate who proudly adopted the New York Times’ description of her as a “modern impresario,” … END_OF_DOCUMENT_TOKEN_TO_BE_REPLACED

Grachan Moncur III, a trombonist and composer who forged a unique identity in the “new thing” of 1960s jazz, died in his longtime home city … END_OF_DOCUMENT_TOKEN_TO_BE_REPLACED

Charnett Moffett, a bassist and composer whose virtuosity on both electric (often fretless) and acoustic instruments was matched by his versatility, died April 11 at … END_OF_DOCUMENT_TOKEN_TO_BE_REPLACED

Ron Miles, a cornetist, composer, and educator who became a revered and innovative figure in jazz while maintaining a career in the far-flung state of … END_OF_DOCUMENT_TOKEN_TO_BE_REPLACED