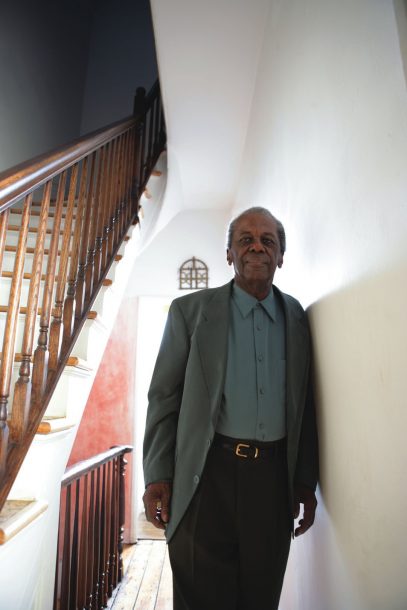 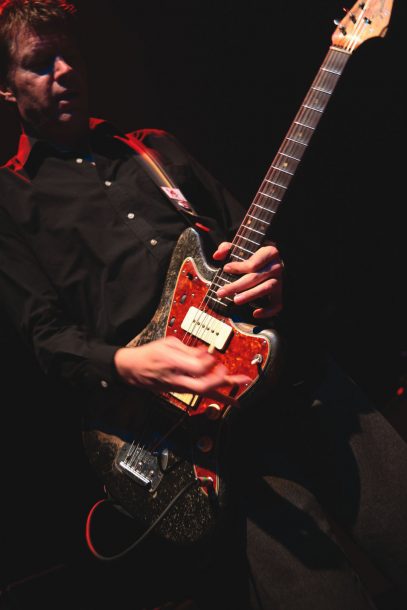 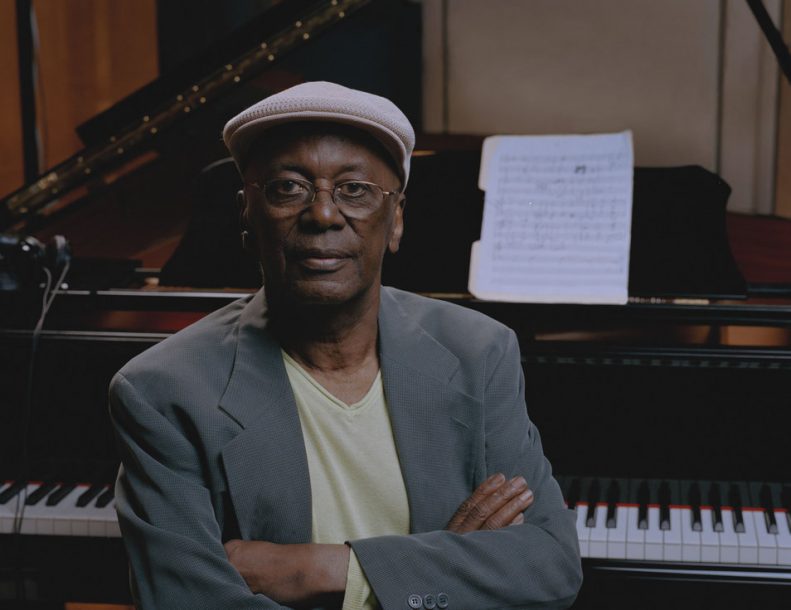 In 1971, when my twin brother Alex and I were about 16 years old, we were exposed to the music of John Coltrane by a friend who thought my brother would like the music since he loved Frank Zappa’s “instrumental stuff.” As West Los Angeles rock ‘n’ roll fiends, we were really not prepared for the sensations and wonders that flowed from this music-the first piece we heard was “Africa”-but we loved it right away. This began a whole new quest into the far reaches of improvised music, most of it considered “jazz.” From Coltrane we discovered Miles Davis, and then pretty much all jazz-related impulses were reachable, either by looking back or by looking ahead. Alex heard something off the Tony Williams Lifetime’s Turn It Over one day on the underground FM rock station KPPC, and the rest is history.

We read up, experimented, tried to put it all together. How could we, as neo-suburban-rock and progressive-rock boys, embrace this music? Very early on Alex embraced not just Miles and Tony, but also Eric Dolphy, Sun Ra, and the Art Ensemble of Chicago. I became Coltrane-obsessed, but together we also started digging Herbie Hancock, Joe Henderson, Bobby Hutcherson, Charles Tolliver’s Music Inc., Sam Rivers, Chick Corea and-naturally-Andrew Hill.

Why naturally? If you read those last few names, you know why. Andrew Hill’s music was to us in the same category as all of our favorite Blue Note gems like Sam Rivers’ Fuchsia Swing Song, Anthony Williams’ Spring and Grachan Moncur III’s Evolution, but it was more original, it was unpredictable, it really took you somewhere. And, OK, it was weirder. Perfect. So it’s no surprise that a record with Eric Dolphy, Joe Henderson and Anthony Williams would grab our attention. Thus Point of Departure entered the pantheon.

Maybe it was our fellow jazz fiend, drummer Michael Preussner, who played us Judgment!. I can’t recall. (It is, after all, a splendid Elvin Jones date so it makes sense.) All I remember is that it was around this time that I decided to pay more attention to this man Andrew Hill because I liked the compositions. I probably likened his piano playing to a hybrid of Randy Weston, Ahmad Jamal and Bud Powell. Who knows? I still don’t really know. Records like Andrew!!!, with superb [and rare non-Sun Ra] John Gilmore tenor work, as well as Compulsion-a personal favorite-always kept me guessing. In a way, certain pieces like “New Monastery” or “Dedication” reminded me of some of my favorite music, that of the late Booker Little. Then there were tunes like “Pumpkin” and “Black Fire” that had a bit of a JuJu-era Wayne Shorter flavor. But there was little to compare pieces like “Spectrum” or “No Doubt” to. This man was intriguing!

As the ’70s were in full swing, Mr. Hill’s music became freer, as did a lot of music at the time, yet it still felt rooted in harmonic tradition. Hill’s never been predictable or safe, and his music maintains a maverick, loose-limbed quality that trusts the improviser while also providing a visionary sonic structure to work within.

Flash forward to 2005: While working extensively with my trio, the Nels Cline Singers (with bassist Devin Hoff and drummer Scott Amendola), I had the odd occasion to add guests to the band. New York-based keyboardist Andrea Parkins sat in with us one night at The Smell in L.A., and Berkeley-based clarinetist Ben Goldberg played a whole set with us one night there at The Starry Plough. I became intrigued with the idea of doing special music involving all five of us. Though many of JazzTimes’ readers may think of me as some kind of errant jazz guitarist, others only know of me in my rock guise. My own music over the years has sought to represent my own personal aesthetics. Consequently, everything I do has a bit of both of these worlds in it. I am then, obviously, not a purist in any sense. Further, I have become much more visible as a member of the band Wilco. Adding all this up begins to explain my decision to play Andrew Hill’s music. I wanted to play with this quintet-even if only once, and I wanted to play not my own music, but the music of someone from whom I could learn, and also whose music suited itself to freewheeling interpretations by this intriguing group of disparate yet arresting players. I also wanted this music to be written by an under-recognized master living among us today. I wanted to point a finger to someone other than myself, to possibly illuminate a path, create curiosity, give credit and give something back. I guess it sounds a bit silly. But this is what I was thinking. Young listeners listen. They are still open and curious and would do well to absorb Andrew Hill’s music.

Then I started to worry. What is my relationship to jazz? I’m not a real jazz guy! Who do I think I am? But I persevered for two reasons: One was that I really wanted to play with this group of people. After returning to Andrew Hill’s music with this project in mind, it became apparent that I needed a brass player. I asked my friend and inspiration Bobby Bradford to play, and when I saw his enthusiasm, my confidence grew. What a great, weird band! Second, I thought of the music itself. Andrew Hill’s music, from the many solo recordings to the wild ‘n’ woolly large groups, was loose, free and not to be categorized. Maybe he won’t mind; maybe that’s what all of this means. I had met Mr. Hill briefly while I was playing with Gregg Bendian’s Interzone at a festival in Skopje, Macedonia many years ago. He was there with his trio and I got a chance to see how absolutely charming he was. I discovered that Ben Goldberg had played with Andrew and also loved the music passionately. I learned that accordion (which Andrea Parkins is noted for playing) was Andrew’s first instrument. I had to do it.

Selecting the music was hard, mostly because I wanted to do so much of it. It was going to be for my friend Jeff Gauthier’s label, Cryptogramophone, which meant I could pretty much do anything I wanted-it just had to fit on a CD. I started with a list of about 16 pieces. After pouring over it for a long time, I decided to combine some of them into suites. This seemed like a good way for the group members, who seem to be naturally conversant with episodic thought and action, to play. It also mirrored what I see as the way a lot of Mr. Hill’s music evolved after pieces like “Spectrum.” And I could squeeze more compositions on the disc. I didn’t want to do all Blue Note stuff, though I admit that it is what I, like most people, was more familiar with. I had also heard A Beautiful Day and The Day the World Stood Still and really liked these two large group discs, especially the blazing rhythm section of Scott Colley and Nasheet Waits. I bought the Mosaic box of “all the rest” of the Blue Note sessions, and this really threw me: There was so much really great, wild stuff at the end of the ’60s here! Sessions with strings (I had some of that on a vinyl “twofer” called One for One); with organ; trios, quintets (some killer Sam Rivers/Robin Kenyatta workouts). I added the jazz-quartet-plus-string-quartet version of “Illusion” to my “must do” list and Ben [Goldberg] agreed.

When all was said and done, I couldn’t do “Illusion.” But I pared the list down to a manageable size using three categories: pieces that I wanted to play no matter what, pieces that seemed right for the players and pieces that were unobvious. “McNeil Island,” “Compulsion,” “Pumpkin,” “Dedication,” “Reconciliation,” “No Doubt” and “New Monastery”-these were the ones for me. “Yokada Yokada,” “Dance With Death”-these seemed cool for the band’s sound. I changed the rather bright exotica of “Dance With Death” to a dark exotica befitting both the combo and reflecting Mr. Hill’s current struggles. I termed it “Psychedellingtonia.” The more obscure tunes included “The Rumproller” (perhaps a bit of slapstick on my part) and “Not Sa No Sa,” though the latter is also perfect for the musicians’ approaches. I also concede that “No Doubt” is a hidden gem. But who else has played these compositions anyway? I learned that Anthony Braxton has a disc of Hill compositions out, and I had no idea. Damn-and I still haven’t heard it! Anyway, I tried to get in touch with Mr. Hill via telephone. Goldberg had his number. And my friend Marty Ehrlich plays with him. But we never hooked up. I get shy, embarrassed, afraid of being annoying. Anyway, I really wanted that string quartet music to “Illusion”! As it turned out, we didn’t have room for it anyway. And after three gigs playing our versions, we had a sound, an identity of sorts. And brother Alex came in for percussion on “Compulsion” and stayed long enough to add to “Dedication.” The feeling was there.

I got all the music together by listening to the recordings, transcribing it, then making arrangements. There might be wrong notes in there! I appealed to Marty Ehrlich for the opening line to “Not Sa No Sa,” which is brisk and “flammy.” He was on tour, but referred me to trumpeter Ron Horton. He had the music, but was also on tour. So all I could do was what I always end up doing: wingin’ it. Both Marty and Ron were very encouraging, as was Michael Cuscuna, who assisted in many ways with information, and who also got me permission from Blue Note and from Mr. Hill to use a detail of the cover of Point of Departure for my CD cover. So things kind of fell into place, and possibly in a way that reflects something of Andrew Hill’s music: a kind of controlled, lucid randomness. There is no way I could ever have seen myself doing this: taking down Andrew Hill music, putting it together for a group of some of my favorite people. Am I not a mostly self-taught garage-rocker? Perhaps no more…

I admit that I still worry that this record is going to be noticed for some of the wrong reasons. To most, I am an electric guitarist, and Andrea Parkins and I use electronics as part of our palette, unlike any of Andrew Hill’s music. I didn’t know when I came up with this idea that Mr. Hill is seriously ill, fighting cancer as I write this (I pray he may recover to write and play more wonders for us). I worry about the jazz police-meaning that I am not, as described a true jazz artiste, but rather a guy pointing to inspiration and attempting some beautiful music in a personal way. What is my stake in the history and evolution of jazz? I really have no idea. But again, look at the man. Listen to his music. It is unpredictable, non-didactic, natural yet advanced, visionary yet approachable, beautiful and free. How can I-or history itself-resist?

Meghan Stabile, an innovative jazz promoter, producer, organizer, curator, and advocate who proudly adopted the New York Times’ description of her as a “modern impresario,” … END_OF_DOCUMENT_TOKEN_TO_BE_REPLACED

Grachan Moncur III, a trombonist and composer who forged a unique identity in the “new thing” of 1960s jazz, died in his longtime home city … END_OF_DOCUMENT_TOKEN_TO_BE_REPLACED

Charnett Moffett, a bassist and composer whose virtuosity on both electric (often fretless) and acoustic instruments was matched by his versatility, died April 11 at … END_OF_DOCUMENT_TOKEN_TO_BE_REPLACED

Ron Miles, a cornetist, composer, and educator who became a revered and innovative figure in jazz while maintaining a career in the far-flung state of … END_OF_DOCUMENT_TOKEN_TO_BE_REPLACED