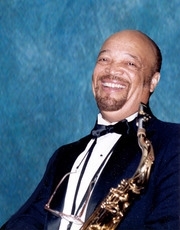 It seems like Red Holloway was always close to me. My memories of Red are almost outside of time and place. I don’t remember when we met or how, or even how we started playing together (though it seems like Gene Ammons, who was also a friend, might have been a part of it). He was just always there, always close, and there’s not a moment I would change about our relationship in all those years. He was a beautiful, beautiful man.

And a wonderful musician. He had a beautiful sound on that saxophone, especially a beautiful sound on the beat: He had great time, could really swing. Of course he loved the blues, too, and always sounded beautiful playing it. He was always available and ready for everything, for a recording session or to play a concert. When we did play a concert, Red was always ready to bring me to my knees. He was a fun-loving guy. He always had funny stuff to talk about with the audience, always got all the laughs. But when he picked up that horn, he was always guaranteed to play superbly.

Again, we got together on so many occasions that it’s hard to remember just one, but for many years we would play together at Joe Segal’s Jazz Showcase in Chicago, over the New Year’s week. Every year Red would be there, and every year we just couldn’t wait to get on the bandstand. We always picked up where we’d left off. I do have one definite memory of Red playing, at one of the Clark Terry UNH Jazz Festivals in Pine Bluff, Ark. I believe it was 2008. I remember him playing the blues and everybody just loved it. And I remember him singing that song “Locksmith Blues”: “My key don’t fit her lock no more.” I was just listening to our recording of that song the other day and thinking of him at that festival.

But what I mainly think about with Red is what a joyful cat he was as a person, as a friend. I loved him like a brother. I used to call him “Brother Red.” Whenever he would call, he would say, “Where’s my brother?” And I would say, “Brother Red!” and we would just start talking.

I remember one time when I was sick with a very bad cold. Red called from California, worried because I was coughing and hoarse and all this stuff. And he got on a plane from California to where I lived in Glen Cove, N.Y.-brought his own can of Lysol, too-and he announced, “I am here to take care of my brother!” He wanted to know what was being cooked for dinner and what kind of medicine I was taking. Another time, just after I’d moved to Arkansas, he was concerned about me because I was losing my sight, so he took me to an eye doctor in California. Red was like that.

That’s how close we were, and that’s how I remember Red. We called ourselves brothers because to me he was just like a real brother. I loved him, and I miss him very much.

Meghan Stabile, an innovative jazz promoter, producer, organizer, curator, and advocate who proudly adopted the New York Times’ description of her as a “modern impresario,” … END_OF_DOCUMENT_TOKEN_TO_BE_REPLACED

Grachan Moncur III, a trombonist and composer who forged a unique identity in the “new thing” of 1960s jazz, died in his longtime home city … END_OF_DOCUMENT_TOKEN_TO_BE_REPLACED

Charnett Moffett, a bassist and composer whose virtuosity on both electric (often fretless) and acoustic instruments was matched by his versatility, died April 11 at … END_OF_DOCUMENT_TOKEN_TO_BE_REPLACED

Ron Miles, a cornetist, composer, and educator who became a revered and innovative figure in jazz while maintaining a career in the far-flung state of … END_OF_DOCUMENT_TOKEN_TO_BE_REPLACED