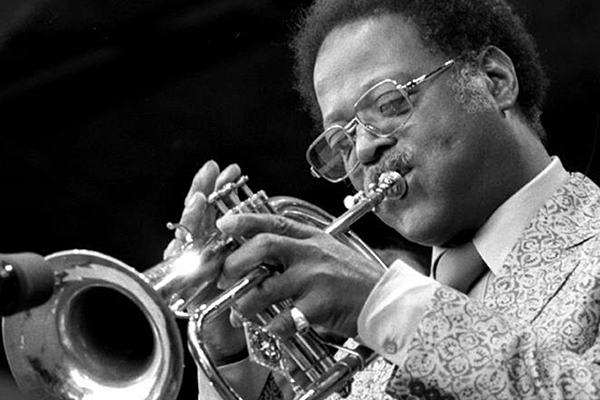 Clark Terry, a major force in jazz for some seven decades, died yesterday, Feb. 21. His death was confirmed by his widow, Gwen Terry, on the artist’s Facebook page. The precise cause of death and the location were not noted, but Terry had long been suffering from advanced diabetes. He had been admitted into hospice care in early February and had been experiencing failing health for several years before that. He was 94.

A highly influential trumpeter and flugelhornist, Terry-who was named an NEA Jazz Master in 1991-was also a respected educator: The Clark Terry International Institute of Jazz Studies, at the now-defunct Teikyo Westmar University in LeMars, Iowa, was named in his honor in 1994 after Terry received an honorary doctorate there. Terry also held doctorates from the Berklee College of Music and the University of New Hampshire. Terry was responsible for organizing numerous jazz camps and clinics throughout his career and was instrumental in the launch of the Jazz Mobile and the Harlem Youth Band. Beginning in 2000, he hosted the Clark Terry Jazz Festival at the University of New Hampshire. Among his many awards, Terry received a Lifetime Achievement Award at the 2010 Grammys.

Terry’s career spanned a vast swath of jazz history: He was one of few musicians who worked in both Count Basie’s and Duke Ellington’s big bands (1948-51 and 1951-59, respectively), and he eased into the bebop milieu without difficulty, influencing Miles Davis, Quincy Jones and others. Beginning in 1960, Terry also spent a dozen years as a staff musician at NBC, where he served as a member of the Tonight Show‘s house band-the first black musician on the NBC payroll. Technically gifted, versatile and both lyrical and rhythmic in his playing, Terry prided himself on his ability to adapt to many subgenres of jazz.

Born Dec, 14, 1920, in East St. Louis, Ill., the seventh of 11 children, Clark Terry lived a hardscrabble childhood-his mother died when he was young and Terry’s abusive father kicked him out of the family’s home when Clark was 12. Music provided solace-according to legend, Terry built a trumpet from a funnel and water hose, but the first real instruments he played were trombone (because his school had run out of trumpets) and bugle, performing in his high school band. After being urged by a professional musician to pursue trumpet more seriously, Terry found odd jobs (including playing for a traveling carnival), and turned professional in the early 1940s, performing with outfits such as Ida Cox’s Darktown Scandals band. He played in the U.S. Navy band during World War II. Following the war’s end, Terry worked with Lionel Hampton as well as Charlie Barnet, Eddie “Cleanhead” Vinson, Charlie Ventura, and George Hudson.

That list also included pianist Oscar Peterson, whose 1964 Mercury album Oscar Peterson Trio + One (the plus one being Terry) featured Terry’s composition “Mumbles.” Scatted by Terry, the tune became something of a signature for Terry over the ensuing years, exposing his humorous side, as did his “duets” with himself, sometimes on more than one instrument. The Jazz Discography by Tom Lord lists a total of 902 Clark Terry sessions from a Feb. 1947 V-Disc recording to July 2008, 788 of those as sideman and 114 as leader, more than 3400 unique tunes in all.

Beginning in 1972, Clark led his own bands, including his Big B-A-D Band, and also became part of Norman Granz’s traveling Jazz at the Philharmonic All-Stars aggregation. During his later years, Terry concentrated increasingly on the flugelhorn.

Terry published Clark: The Autobiography of Clark Terry in 2011 and was the subject of last year’s documentary film Keep On Keepin’ On, which chronicles Terry’s mentorship of the 23-year-old blind piano prodigy Justin Kauflin. The Clark Terry Archive at William Paterson University in Wayne, N.J., contains instruments, arrangements, recordings and memorabilia.

Charnett Moffett, a bassist and composer whose virtuosity on both electric (often fretless) and acoustic instruments was matched by his versatility, died April 11 at … END_OF_DOCUMENT_TOKEN_TO_BE_REPLACED

Ron Miles, a cornetist, composer, and educator who became a revered and innovative figure in jazz while maintaining a career in the far-flung state of … END_OF_DOCUMENT_TOKEN_TO_BE_REPLACED

Ernie Andrews, a deep-voiced singer who scored a major hit (1945’s “Soothe Me”) when he was still in his teens but remained perennially underrecognized by … END_OF_DOCUMENT_TOKEN_TO_BE_REPLACED

I’ve been playing the organ since I was 10 years old because I love the sound of the Hammond B-3. Once I heard Jimmy Smith … END_OF_DOCUMENT_TOKEN_TO_BE_REPLACED