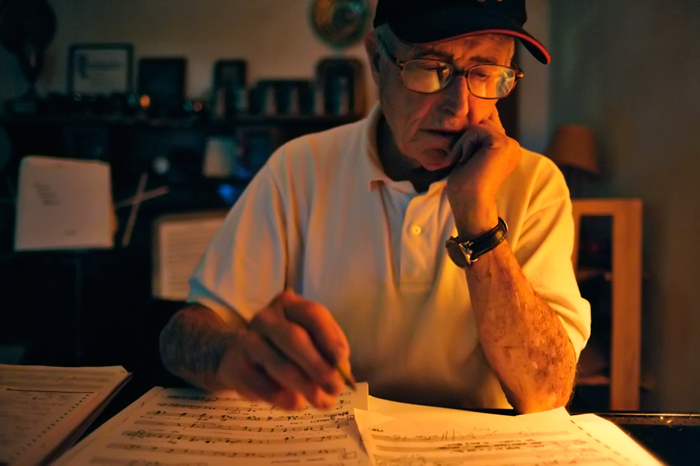 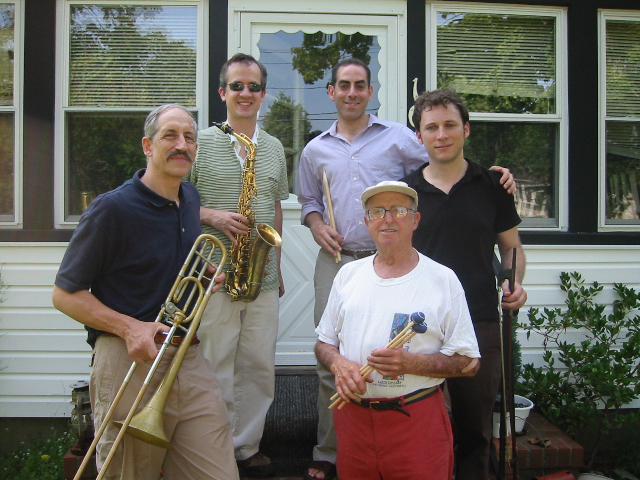 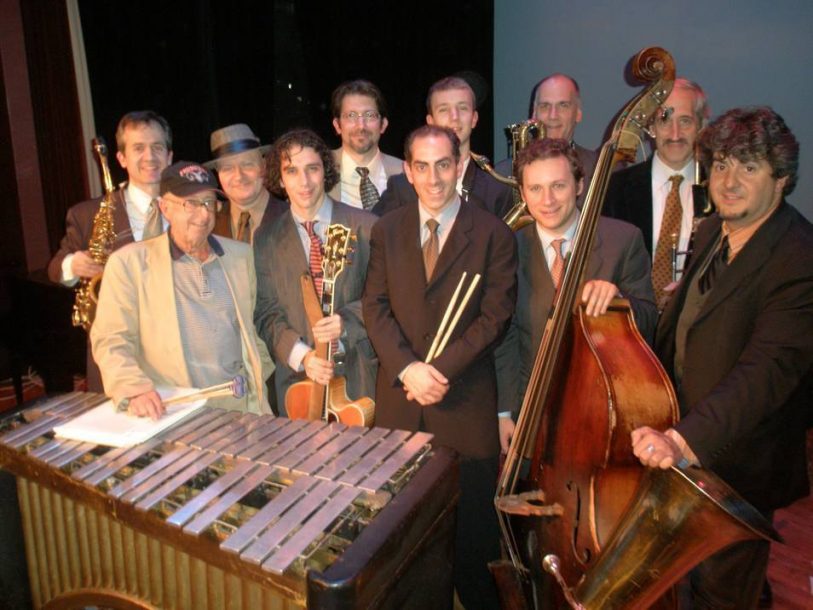 The “New” Teddy Charles Tentet (Charles is far left, in front of his vibes), after completing a performance for the Bronx Jazz Series at the Riverdale Y in November 2008 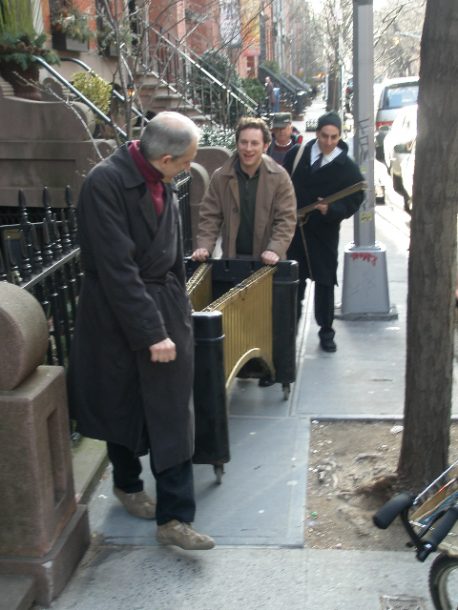 I began my professional relationship with Teddy in 2007 with a cold call, urged by my good friend, jazz historian Noal Cohen. I had recently completed an extensive study of the music of Gigi Gryce. Cohen, who published an excellent biography of Gryce, felt that I should reach out to Teddy, who hired Gigi to play alto in the Teddy Charles Tentet in the 1950s. Charles had a reputation for being difficult to communicate with, but the mention of Gryce’s name cut through the social barriers and I soon became acquainted with a very entertaining, talented and funny man. I scheduled a jam session at his house in Riverhead, Long Island, with the members of my quartet: John Mosca (trombone), Ari Roland (bass) and Stefan Schatz (drums).

It soon became evident that Teddy was as much of a comedian as he was a jazz vibraphonist/composer. His living conditions were somewhat dilapidated, and he had several dogs that were mostly out of control. The first laughs we had mostly centered on the dogs, who would pester us while we tried to play tunes that we all knew, such as Charlie Parker melodies and common jazz standards (like “All the Things You Are”). There were many exchanges that inspired respect. I asked him what he thought of my tenor saxophone hero, Lucky Thompson, and he replied, “Oh, Lucky? He was great! I had a trio in the ’50s with him and Oscar Pettiford.” Then he told us about subbing on piano for Thelonious Monk at Minton’s (Monk was an erratic attendee of his own gigs), and how Hank Jones took him under his wing and showed him the chord voicings that would give him the New York sound.

The drive to Eastern Long Island made these jam sessions fairly difficult, but fortunately we were able to progress to paid opportunities. The biggest prize came first, in the spring of 2008: a weeklong engagement at the Village Vanguard. My group performed the week on the heels (literally, the night after returning) of a month-long “Rhythm Road” tour for the U.S. State Department. But Teddy proved tougher than us, performing all week with a major injury he had sustained to his leg, which created an open wound and eventually required hospitalization. We performed the same Bird-and-standards mix, with a few extras thrown in: Teddy Charles originals that I transcribed for the group, such as “No More Nights” and “Arlene.”

During the rehearsals for the Vanguard week, we got to know about Teddy’s love of New York pastrami sandwiches. From that point on, I made sure to always have a sandwich for him, from the 2nd Ave Deli, Katz’s or the Stage Deli. The pastrami had the same effect as feeding Popeye a can of spinach. I have a picture of our band pushing Teddy’s vibraphone down the street; I’m not sure how we wound up in that situation but we were all laughing way too much to care.

Over the next few months we performed gigs at Iridium Jazz Club and Smalls, and recorded a “return to the scene” CD, Dances With Bulls (Smalls Records, 2008). We imported Harold Danko, a longtime colleague of Teddy’s, to play piano on the recording. He and Teddy took an extended avant-garde duet on the intro to the title tune; somehow they both seemed to know what to do, even though the music sounded like agitated forest animals.

I would describe Teddy Charles’ concept for comedy as being a mix of Woody Allen’s New York Jewish sensibility, the timing of the Marx Brothers and a sprinkling of Andrew Dice Clay’s knack for (or lack of) formality and respect for others. I remember advising him to take a yoga class for seniors, since the male/female ratio would favor him, and he would certainly meet several candidates for female companionship. He replied, “I don’t want to meet someone my age! I want to meet a 21-year-old secretary/masseuse!” One night, during an intermission at the Iridium, he staged a recreation of the Marx Brothers’ stateroom scene from A Night at the Opera in the small dressing room; we tried to get as many people in the room as possible, including audience members who had no idea what was going on, and engage everyone in simultaneous conversation. The next night, we recreated the Marx Brothers’ “party of the first part” scene, where they rip up a contract line by line. If I’m recalling correctly, our “straight man” was Smalls Records executive Luke Kaven.

Somehow, I incorporated Teddy, his king-sized Deagan vibraphone, his rickety 1978 van and his 80-mile Long Island commute into a Chamber Music America residency called the Bronx Jazz Series. It was a lot of work, but we had some great moments. I remember Stefan’s phone call as he was riding with Teddy in the van. He was calmly relaying driving directions to Teddy while describing to me, in disbelief, how many traffic violations Teddy was committing at the time. We performed with Teddy at the Gigi Gryce School in the Bronx. Teddy took a moment to describe Gryce to the young audience, saying how he was a great role model, always on time, well dressed and polite, and such an excellent musician. Until that visit, the school had never heard first-hand of Gryce’s jazz career, only knowing him as Mr. Qusim, the larger-than-life, intense music teacher. With help from Pete Anderson (tenor saxophone), Amie Margolis (French horn), William Ash (guitar), Richie Vitale (trumpet), Steve Ash (piano) and Marcus Rojas (tuba), we performed a set of the music of the Teddy Charles Tentet, which had not been heard live since the 1950s.

Teddy had a treasure trove of music that he arranged, as well as a pile that he commissioned from great arrangers such as George Russell, Bob Brookmeyer, Mal Waldron, Jimmy Giuffre and Gil Evans. Most of it was recorded in 1956, but he had accumulated another pile comprising decades of musical thoughts, mostly sketches for the Tentet. I regret that life did not afford me the flexibility to fully “raise the Titanic” and bring these sketches to life with his guidance. It was just too much.

Perhaps some readers are aware that Teddy ditched the New York music scene in the 1960s to pursue his second love, the life of sailing. As he described it, he decided to live “every man’s dream” as a ship captain, running cruises up and down the Atlantic coast for about 35 years. While the careers of jazz vibraphonist/composer and sea captain may seem to form a disjunctive hybrid, I saw a lot of “Captain Teddy” while dealing with him as a musician. His physical resilience showed seaworthiness, as he was always battling a variety of painful conditions but was almost never sidelined. He had a captain-ish tendency to wait impatiently for his requests to be addressed. At a recording, when he told me (for the second time) of his needs (a music stand, a cup of coffee and a glass of red wine) and I answered that I was still working on it, he informed me, “That’s great, Chris, but I need to see them moving toward me.”

I was awarded the Chamber Music America grant for composition in 2009, on the proposal of creating a musical biography of Teddy Charles. I called it “Bop-ography.” This resulted in performances at Iridium and the Players Theatre, and a commercial recording (Bop-ography, SteepleChase Records, 2009). The 20-plus-minute piece had three parts, musically depicting his arrival on the 1940s New York jazz scene, his self-imposed 35-year isolation, and his triumphant return. I chose to turn him loose on three chord structures that he knew well: “Cherokee,” the blues and “Rhythm” changes. I would urge all vibraphonists to learn the three solos he took on this recording. I hope I can wield the same creative fire when I’m 81 years old.

My international touring in 2010 and 2011 slowed down our collaborations to occasional visiting phone calls. But in Teddy’s last days, John Mosca and I were coordinating his appearance at the 2012 Charlie Parker Festival, for which he would have played as the headliner. He was one of a handful of surviving musicians who had played with Bird. Although he might have known that he would never make it, our last phone call was an upbeat one; we talked about how the gig would be great and it would be fun to play together again.

In closing, I’ll remember Teddy as a realist. He knew his days were numbered. He made his choices to suit himself and was able to enjoy the rewards as they happened, and suffered whatever consequences arose without guilt or self-pity. While he’s known as an arranger/composer, I believe his playing was even more valuable than his writing. As a jazz improviser, his greatest asset was something intangible, un-teachable, un-possessable: the ability to evade prediction while simultaneously maintaining his rhythmic drive. I urge the reader to give a first-time listening to a recording of a Teddy Charles solo and try to sing along. You’ll know what I mean.

Meghan Stabile, an innovative jazz promoter, producer, organizer, curator, and advocate who proudly adopted the New York Times’ description of her as a “modern impresario,” … END_OF_DOCUMENT_TOKEN_TO_BE_REPLACED

Grachan Moncur III, a trombonist and composer who forged a unique identity in the “new thing” of 1960s jazz, died in his longtime home city … END_OF_DOCUMENT_TOKEN_TO_BE_REPLACED

Charnett Moffett, a bassist and composer whose virtuosity on both electric (often fretless) and acoustic instruments was matched by his versatility, died April 11 at … END_OF_DOCUMENT_TOKEN_TO_BE_REPLACED

Ron Miles, a cornetist, composer, and educator who became a revered and innovative figure in jazz while maintaining a career in the far-flung state of … END_OF_DOCUMENT_TOKEN_TO_BE_REPLACED