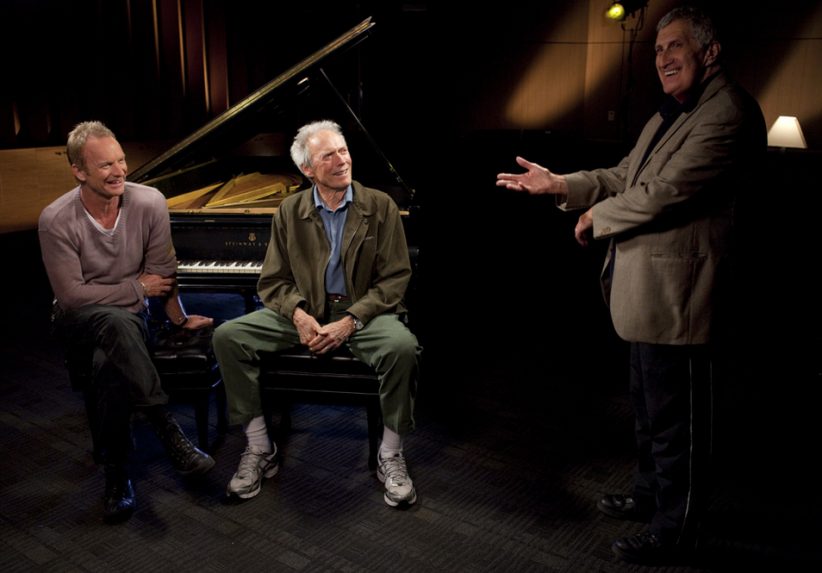 Sting, Clint Eastwood and Bruce Ricker on set on Dave Brubeck: In His Own Sweet Way 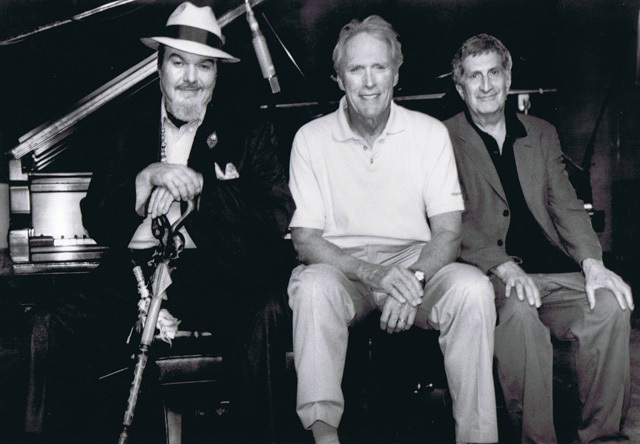 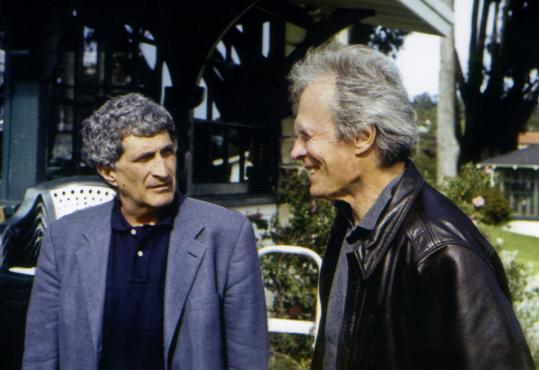 Bruce Ricker, a filmmaker best known for The Last of the Blue Devils, his early documentary about Kansas City blues and jazz musicians, as well as a series of well-received music-doc collaborations with Clint Eastwood, died on May 13 in Cambridge, Ma. The cause of death was pneumonia. Ricker was 68.

Interestingly, Ricker had a circuitous route to his career as a music filmmaker. In his younger years, he worked as a police cadet, booking agent, social worker and cab driver before getting his law degree from Brooklyn Law School. A teaching fellowship at the University of Missouri in Kansas City turned into a fortuitous opportunity for Ricker, who hung out at local jazz and blues clubs in that city. A passionate fan of the music, he started filming the local players, including the legendary pianist Jay McShann.

Ricker told JT last year that the central theme of a reunion of seminal Kansas City jazz players happened largely as a result of being in the right place at the right time. “It’s all luck,” Ricker said. “In Last of the Blue Devils, when Count Basie walks in, he doesn’t know that Big Joe Turner and Jay McShann were going to be there. So it was total luck that he happened to be playing Kansas City that weekend, and total luck that we happened to be filming that day.”

That film, with its stirring and sentimental footage, ended up being a catalyst for one of the most important professional relationships in Ricker’s life-with actor, writer, director and jazz fan Eastwood. Eastwood began working with Ricker in 1987. Ricker told JT that their relationship stemmed from the period when Eastwood was working on Bird, his movie about Charlie Parker starring Forest Whitaker. “Somebody on his staff had seen or heard about Last of the Blue Devils, because they were contemplating whether to shoot on location in Kansas City,” Ricker said. “So someone told him, ‘You know, there is this movie about Kansas City jazz and Count Basie and all that and maybe you should go look at it.’ And Clint looked at it and he thought it was great. At the same time, I was struggling with Charlotte Zwerin, trying to get the Thelonious Monk movie, Straight No Chaser, finished. At that time he was getting a lot of flak from Spike Lee and others. The idea was that he would get Warner Brothers to put up money for Straight No Chaser, because this would reinforce the idea that Clint was supporting jazz. And if you’re going to really support jazz, there’s nobody more important than Thelonious Monk in jazz. So that gave Clint great cachet.”

However, Eastwood’s involvement soon evolved into more than that of just a patron. “I decided I would work with him and we would find projects,” Ricker explained. “Somehow it seems that we’re doing things more quickly lately.”

Among the projects the two worked on together were: Piano Blues, one of the episodes in Martin Scorsese’s The Blues series for PBS, Tony Bennett: The Music Never Ends, Eastwood After Hours-Live at Carnegie Hall, Clint Eastwood-Out of the Shadows, Budd Boetticher-A Man Can Do That, Johnny Mercer: The Dream’s on Me, and Dave Brubeck: In His Own Sweet Way.

Ricker told JT that Brubeck was a perfect subject for Eastwood, who is a pianist himself and a lifelong Brubeck fan. “Clint has always had a particular fondness for Dave because they both come from Northern California,” Ricker said. “And Dave was one of the people that Clint used to listen to all the time. I figured we could profile Dave through Clint’s eyes as a storyteller, and make Clint Johnny Appleseed or something.”

Talking about the Brubeck film, Ricker said that having Eastwood onboard made it easier to finance projects, and also gave them a bit more artistic freedom. “Clint’s name is a big help,” said Ricker. “It gives us lots of freedom. He will let the music run for two minutes, unlike PBS who said that people won’t understand this and that we should put some talking heads in there.” However, Ricker said that Eastwood is not just a figurehead or front man for the production of documentaries like the one on Brubeck. “He’s 100 percent involved. Clint does look at the film. He is in the editing room every week. He’s very hands-on. The advantage of making the films with Clint is that it has to work cinematically. That’s why there’s not as much narration. You don’t have to stop time to explain everything or create the story.”

Eastwood told the Boston Globe that Ricker was not the typical Hollywood creative type. “Bruce was a different kind of guy,” Eastwood he said. “He was extremely well read and loved a lot of art forms. He made things happen. He was very tenacious. He’d go out and get people interested in a documentary. He was great at interviewing people, getting them to open up. He was more interested in the art of jazz than he was in making a living. Here was a guy who really just loved the subject matter, not only jazz, but popular music, the movies.”

That combination of passion and intelligence was palpable to anyone who met Ricker, who was a tireless promoter of not only his own films and projects but also the work of others in the field. A chance meeting with him might start with a pitch about a new film he was working on and shift to a film he had seen or a book he had read and end up with him promising to send you the book, tape, video or publication that the two of you had discussed. And, within a week or two, a hand-addressed envelope would arrive with the promised material along with a barely legible note letting you know that he hadn’t forgotten and he wanted to make sure that you received the enclosed. He talked fast, in a thick NYC boroughs accent, but he was never rude or pushy, merely passionate and engaged.

Ricker also owned a video distribution company called Rhapsody Productions, which marketed his documentaries as well as music documentaries from other filmmakers.

Ricker is survived by his wife, Kate Gill; his mother, Estelle Ricker; a daughter, Emma Gill of Cambridge, and a son, Jason Ricker of Atlanta; three brothers, Kenneth of Lyme, Conn., Carl of New London, Conn., and Bob of Salem, S.C.; and two grandchildren.

Meghan Stabile, an innovative jazz promoter, producer, organizer, curator, and advocate who proudly adopted the New York Times’ description of her as a “modern impresario,” … END_OF_DOCUMENT_TOKEN_TO_BE_REPLACED

Grachan Moncur III, a trombonist and composer who forged a unique identity in the “new thing” of 1960s jazz, died in his longtime home city … END_OF_DOCUMENT_TOKEN_TO_BE_REPLACED

Charnett Moffett, a bassist and composer whose virtuosity on both electric (often fretless) and acoustic instruments was matched by his versatility, died April 11 at … END_OF_DOCUMENT_TOKEN_TO_BE_REPLACED

Ron Miles, a cornetist, composer, and educator who became a revered and innovative figure in jazz while maintaining a career in the far-flung state of … END_OF_DOCUMENT_TOKEN_TO_BE_REPLACED