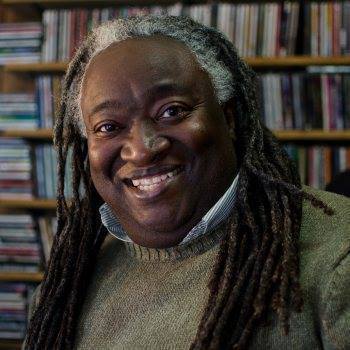 Jackson most recently created, wrote and hosted The Roots of Smooth, a syndicated radio program airing on 21 stations. Prior to that, he was the music director of northeastern Ohio public radio station WCPN 90.3-FM and WVIZ-TV. His program Jazz Tracks was named the Ohio Educational Telecommunications Program of the Year and he received the Gavin trade magazine’s national jazz radio Programmer of the Year award three times. He also emceed a national broadcast of the Detroit International Jazz Festival and operated a website, The Jazz Mind.

As an educator, Jackson taught at the Oberlin Conservatory of Music, where he served as an adjunct professor. He wrote liner notes for Oberlin’s jazz faculty recordings and articles on some of the Oberlin jazz faculty. He also taught a jazz history class at the Cleveland Music School Settlement.

Born in The Bronx, and a graduate of DeWitt Clinton High School, Jackson got his start in radio during the late 1970s at the University of Georgia’s student-run station WUOG in Athens, Ga. He spent seven years (1987-94) as a host and both music director and program director at WCLK-FM in Atlanta. His move to Cleveland came in 1994, where he remained until his death. Jackson also worked at two major television networks with the likes of Robbin Roberts and Earnie Johnson.

Jackson was the recipient of the Duke Dubois Humanitarian Award at the 2010 Jazz Week conference in Rochester, N.Y. Other honors included the Communicator’s Award-National Crystal Award of Excellence, and the Ohio Educational Telecommunications Award for Best Cultural Arts Weekly Series.

Said Sylvia, “Bobby was a warrior protecting jazz, not so it would stay the same but so that it could grow. He believed that jazz was an expression of African-American culture.”

Meghan Stabile, an innovative jazz promoter, producer, organizer, curator, and advocate who proudly adopted the New York Times’ description of her as a “modern impresario,” … END_OF_DOCUMENT_TOKEN_TO_BE_REPLACED

Grachan Moncur III, a trombonist and composer who forged a unique identity in the “new thing” of 1960s jazz, died in his longtime home city … END_OF_DOCUMENT_TOKEN_TO_BE_REPLACED

Charnett Moffett, a bassist and composer whose virtuosity on both electric (often fretless) and acoustic instruments was matched by his versatility, died April 11 at … END_OF_DOCUMENT_TOKEN_TO_BE_REPLACED

Ron Miles, a cornetist, composer, and educator who became a revered and innovative figure in jazz while maintaining a career in the far-flung state of … END_OF_DOCUMENT_TOKEN_TO_BE_REPLACED