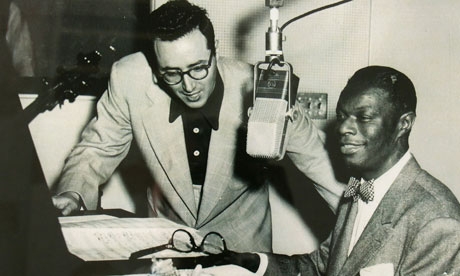 Composer and arranger Pete Rugolo was a signature voice in the history of jazz music and popular culture. He joined Stan Kenton’s band in 1945 as an arranger and changed the jazz language; he brought in serial music and became part of a group of arrangers who embraced the rhythmic ideas of Igor Stravinsky.

In 1949 he joined the staff of Capitol Records and produced the legendary Birth of the Cool band with Miles Davis and Gerry Mulligan. The clarity of sound on the original recording is a result of Rugolo’s classically trained ears. Soon after his stint with Capitol he worked for Mercury as a producer (Dinah Washington, Billy Eckstine) before beginning a career as a solo artist. His LPs were diverse, highly musical and filled with surprises, and he used the best of the West Coast jazz players.

For many people all over the world he is known-not necessarily by name but by melody-for his film and television work. “Leave It to Beaver” (a variation of “I Got Rhythm”) and The Fugitive (a Wagnerian score filled with leitmotifs) are just a few of his contributions to global pop culture.

In that commercial world he gravitated toward a highly skilled group of musicians, composers and arrangers, among them John Williams and André Previn, men with whom Rugolo shared a close personal friendship and a unique bond. That bond was jazz. These musicians were at such a high level of artistry that they could create music for films and then go play a set at the local jazz club.

Rugolo helped pioneer the idea of the highly trained musician becoming an A&R man and producer for a recording company, and his successes opened the door for producers like Teo Macero. Rugolo’s presence at a recording session meant that all details large and small were taken care of. It is this subtle touch that makes all the difference between an ordinary performance and a classic. “He never cared about the money, only the music,” said his wife, Edye.

During my studies at North Texas State, Rugolo was important to my development as an arranger. He used classical music concepts in jazz; incorporated the Ellington sound into the Kenton band; and influenced Henry Mancini to become more jazz-centric: all accomplishments that, for arrangers, created a road map to artistic freedom. When I was performing with Woody Herman, I arranged the Wayne Shorter composition “Virgo” for the Herd. After rehearsing the chart, Woody looked at me and said, “It sounds like Pete Rugolo!”

I took it as a compliment of the highest order.

Meghan Stabile, an innovative jazz promoter, producer, organizer, curator, and advocate who proudly adopted the New York Times’ description of her as a “modern impresario,” … END_OF_DOCUMENT_TOKEN_TO_BE_REPLACED

Grachan Moncur III, a trombonist and composer who forged a unique identity in the “new thing” of 1960s jazz, died in his longtime home city … END_OF_DOCUMENT_TOKEN_TO_BE_REPLACED

Charnett Moffett, a bassist and composer whose virtuosity on both electric (often fretless) and acoustic instruments was matched by his versatility, died April 11 at … END_OF_DOCUMENT_TOKEN_TO_BE_REPLACED

Ron Miles, a cornetist, composer, and educator who became a revered and innovative figure in jazz while maintaining a career in the far-flung state of … END_OF_DOCUMENT_TOKEN_TO_BE_REPLACED