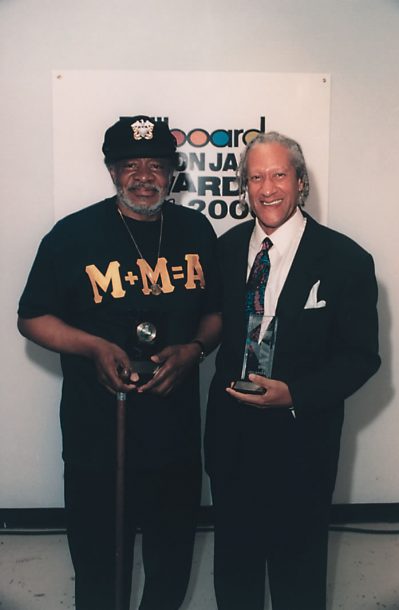 I worked with Donald Byrd from 1981 until the early ’90s in various roles. We met when he was teaching at North Texas State University. Since I had already been on the road and was in town to hone music skills we became friends and collaborators on many levels. I would perform with his current band, I would help him assemble a band for a gig, I would substitute for his music classes at North Carolina Central University and would help him on his doctorate with copy work, and in return he would answer any question I asked about the music biz and jazz history.

From Donald I got a better understanding of the day-to-day life of the jazz musician during the ’50s and ’60s. He said that all musicians who came from Detroit had new cars. He last took a ride on a New York subway in 1958. He showed me Harlem and Greenwich Village from the standpoint of having been on the scene with the musicians and pointed out many old homes where legends once lived, where clubs used to be and where cats used to hang socially. We discussed law, flying an airplane, Nadia Boulanger, good barbeque in Chapel Hill, N.C., Paul Hindemith, Cass Tech’s music program, the concept of preaching to a congregation and at times, Coltrane. And that would be in one afternoon.

What I did notice was a deep hurt caused by the torrent of criticism leveled at his success with transitioning into jazz/soul Fusion (via Black Byrd from 1973) and then into hardcore funk (via Places and Spaces and the Blackbyrds). Donald played for the people and held the concept of providing the audience with something to latch on to. When jazz musicians were transitioning into jazz/rock/soul/funk/fusion, it opened up a door for a larger framework to work within, socially, musically and financially. Donald said he was not “selling out” but “selling up” and to him this meant the ability to perform, travel and live with a certain level of professional dignity that was not available for jazz musicians at the time.

A few years ago, Michael Cuscuna called me up and asked me to contact Byrd to let him know that he (Byrd) had “recouped” his Blue Note royalty account (costs incurred during the mid-’70s’ excessive budgets and brought under control due to mid-’90s sampling). I called Byrd at his home in New Jersey and said, “Hey, man, you’ve paid off your Blue Note mortgage!” He was thunderstruck and then asked if he was going to “get a check” any time soon. Then, after an awkward moment of silence, we both started laughing at the same time.

Meghan Stabile, an innovative jazz promoter, producer, organizer, curator, and advocate who proudly adopted the New York Times’ description of her as a “modern impresario,” … END_OF_DOCUMENT_TOKEN_TO_BE_REPLACED

Grachan Moncur III, a trombonist and composer who forged a unique identity in the “new thing” of 1960s jazz, died in his longtime home city … END_OF_DOCUMENT_TOKEN_TO_BE_REPLACED

Charnett Moffett, a bassist and composer whose virtuosity on both electric (often fretless) and acoustic instruments was matched by his versatility, died April 11 at … END_OF_DOCUMENT_TOKEN_TO_BE_REPLACED

Ron Miles, a cornetist, composer, and educator who became a revered and innovative figure in jazz while maintaining a career in the far-flung state of … END_OF_DOCUMENT_TOKEN_TO_BE_REPLACED