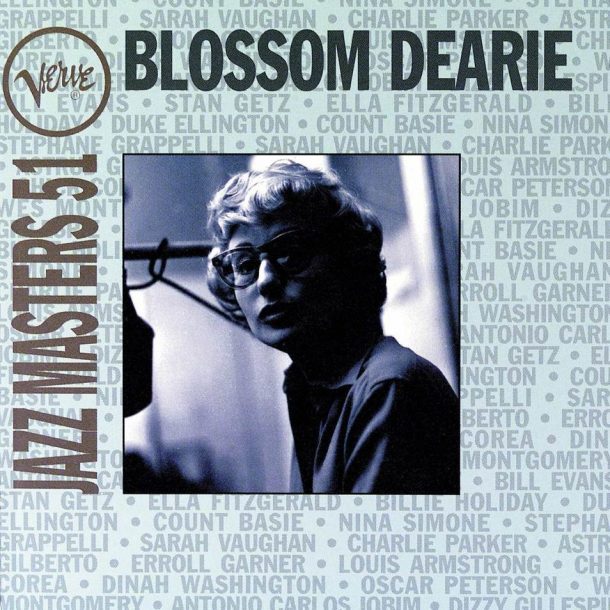 Blossom Dearie was probably an important part of the soundtrack of my childhood. I say “probably” because it is only now that I can reflect on the irony of hearing her wry and bittersweet singing at such an early age. Albums like Blossom Sings Broadway Hit Songs, Once Upon a Summertime and My Gentleman Friend played on the family turntable in our Chicago walkup, and having never seen her on TV, she must have sounded to my 5-year-old ears like the perfect playmate-a precocious child who has decided to tell secrets about adult things she has learned way before her time.

I was such a child, often sleepless at night, learning the cues of the world from the tones of adult voices both spoken and sung. In the dark, I listened through my door to voices like Ella Fitzgerald, who gave me the company of childlike exuberance and joy, and Blossom Dearie, who gave me the company of girlish intelligence, undaunted by the disappointments and truths she’d learned about life.

“She has a tiny voice,” wrote Whitney Balliett in the New Yorker. “Without a microphone it wouldn’t reach the second floor of a doll’s house.” I finally got to hear that haunting and unmistakable voice live when I moved to New York to pursue my career as a singer, pianist and songwriter. I had been saving up tip-jar money from my early piano-bar gigs and sneaking into the Village Vanguard to hear Bill Evans, Marty’s to hear Mel Tormé, Abington Square to hear Carol Sloane, and the Blue Note to hear Sarah Vaughan. Finally, on one night in the early ’80s, I went to hear Blossom Dearie, who was appearing at a cabaret called the Ballroom.

As the house lights dimmed, I was stunned to see a woman in a blond pageboy haircut modestly step onto the stage and seat herself at the piano wearing a plain white blouse under what looked like a corduroy jumper. Was this “the little jazz bird” who had taught me the songs of David Frishberg and Bob Dorough, making the world seem as dry as a martini? Was this the sophisticate who had written gems with Johnny Mercer and Cy Coleman? She bore no resemblance to that other blonde jazz bird, Peggy Lee, whom I so admired. Instead of strutting out with glamour and sex appeal, it seemed Blossom was like a nursery school teacher, ready to teach us the alphabet. But what an alphabet it was.

The moment Blossom began playing her first song, I fell under the spell of her supremely elegant chords and immediately entrusted myself to the ring of truth behind every subsequent word she sang. How could such a plaintive, schoolgirl soprano voice, with almost no vibrato, bring such a depth and purity of meaning into the lyrics of songs I had heard sung by so many singers with far more dazzling instruments? Song after song, Blossom seemed to sing and play with striking economy, articulating the aching beauty of each idea. She seemed to believe that to adorn an idea would obscure its beauty, not enhance it. And like another hero, Shirley Horn, Blossom was teaching me the musical power of silence-giving notes, thoughts and feelings a chance to resound. That night, I got a lesson that my mother, Shirley, a singer, pianist and voice teacher, had been trying to teach me my whole life: “Less is more.” I had always joked back, “More is not enough.” For 75 minutes, Blossom was living proof of how right my mother was.

After the show, I was surprised when she came out and sold her records right in the house. She had started her own label, Daffodil, and was being a very proactive singer/record producer. I waited in line to purchase her latest release and finally had the chance to convey my admiration and introduce myself. Blossom welcomed me very graciously. She said she’d been hearing good things about me and asked where I was performing.

Soon after, she came to hear me perform my own one-woman show and asked if she could have one of my original songs called “This Might Be Forever.” It wasn’t long after that I returned to the Ballroom and was treated to a performance of Blossom singing my composition. It was the first time a great singer sang one of my own songs and it was exciting to hear how different her interpretation was from mine. I had sung the ballad with a sweeping romantic style and she sang it with a sort of knowing half-smile. She gave me my first experience of feeling that a song I wrote could and would have a life of its own.

Through the years, we went to hear each other perform and enjoyed a warm camaraderie. She called me up one Christmas Eve out of the blue to invite me to a show at Carnegie Hall. And when I made my debut in London, her fans showed up to embrace me and seemed to appreciate the kindred spirit of intimacy, playfulness and love of swinging, witty songs. One fan, Anthony, told me a funny story about Blossom in London back in the day. The club owner would announce her and then she would introduce a woman who bowed and spent the entire show sitting under the piano. “Darling, it was the swinging ’60s,” Anthony said. To this day I wonder how much crazy fun I missed out on. I would have loved to see her perform in those days with her friends Annie Ross, Peter Cook, Dudley Moore and so many others.

Who was Blossom Dearie? She was a private person, but her secrets live on in the words, the notes, the silence and the inimitable tongue-in-cheek style of her timeless recordings. Blossom was a musician’s musician. Miles Davis said, “She’s the only white woman who ever had soul.”

At the age of 82, Blossom died on Feb. 7, which happens to be my anniversary. I hope she is correcting me in heaven and singing, “This will be forever.”

Meghan Stabile, an innovative jazz promoter, producer, organizer, curator, and advocate who proudly adopted the New York Times’ description of her as a “modern impresario,” … END_OF_DOCUMENT_TOKEN_TO_BE_REPLACED

Grachan Moncur III, a trombonist and composer who forged a unique identity in the “new thing” of 1960s jazz, died in his longtime home city … END_OF_DOCUMENT_TOKEN_TO_BE_REPLACED

Charnett Moffett, a bassist and composer whose virtuosity on both electric (often fretless) and acoustic instruments was matched by his versatility, died April 11 at … END_OF_DOCUMENT_TOKEN_TO_BE_REPLACED

Ron Miles, a cornetist, composer, and educator who became a revered and innovative figure in jazz while maintaining a career in the far-flung state of … END_OF_DOCUMENT_TOKEN_TO_BE_REPLACED