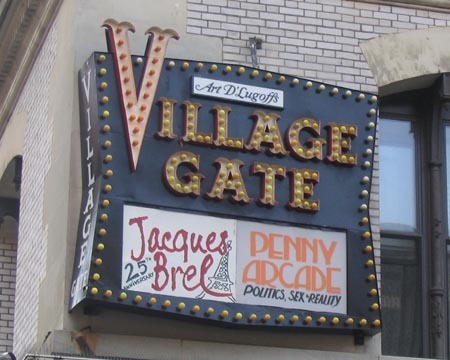 Art D’Lugoff, the owner of The Village Gate nightclub located in the heart of Greenwich Village for over 40 years, died on Wednesday, November 4, 2009 in Riverdale, N.Y. D’Lugoff was 85 years old.

After producing concerts around New York City for several years, D’Lugoff and his brother Burt opened the Gate, as it was informally called, in 1958. He booked many of the greatest names in jazz, such as Miles Davis, Dizzy Gillespie, Thelonious Monk, Billie Holiday and Duke Ellington. Located in the heart of the Village near the corner of Bleecker and Thompson Streets, the club also featured comedy and among the famous comedians who performed there, way before they became famous, were Bill Cosby, Woody Allen and Mort Sahl. Among the nearly apocryphal stories told about D’Lugoff were that he turned away Bob Dylan and that he fired Dustin Hoffman (as a waiter). Of course, many clubs and promoters rejected Dylan in his early years in New York City, but the story speaks as much about D’Lugoff’s unique combination of self-confidence and humility.

D’Lugoff was involved with yet another generation of comics as a producer of shows connected with the National Lampoon comedy group. Among the noted comedians in those productions were John Belushi, Chevy Chase and Christopher Guest.

All his life D’Lugoff was passionate about Latin music, which he booked and promoted at the club, most famously in a weekly series he called Salsa Meets Jazz. That series helped to popularize Latin music to the downtown scene and strengthen the connection between the jazz and Latin music communities. D’Lugoff was also proud that the series brought together different audiences who shared a common love of the music and dancing.

When the club shut down in 1994, D’Lugoff tried to start another club elsewhere in the city, but never was able to gain the necessary funding or traction. For many years, D’Lugoff also devoted himself to raising funds for and establishing a museum in NYC devoted to jazz. However, the museum as he envisioned it was never able to take hold, though the efforts did end up helping to create the Jazz Museum of Harlem, now under the direction of Loren Schoenberg.

The site of the Gate is now inhabited by Le Poisson Rouge (for those who didn’t take French in high school, that’s The Red Fish), a nightclub that embraces perhaps a more modern version of D’Lugoff’s original vision. In fact, D’Lugoff collaborated with the young owners of that club to revive his Salsa Meets Jazz series. Last year in a piece about that partnership, D’Lugoff told New York Times writer Albert Gonzalez: “My emphasis has always been on picking artists who please the public, please me and give me a living, I was thankful if I could break even. I never was interested in just making money – not that I have anything against that. But I did what I wanted. I did different things.”

D’Lugoff is survived by his wife, three daughters and a son.

Meghan Stabile, an innovative jazz promoter, producer, organizer, curator, and advocate who proudly adopted the New York Times’ description of her as a “modern impresario,” … END_OF_DOCUMENT_TOKEN_TO_BE_REPLACED

Grachan Moncur III, a trombonist and composer who forged a unique identity in the “new thing” of 1960s jazz, died in his longtime home city … END_OF_DOCUMENT_TOKEN_TO_BE_REPLACED

Charnett Moffett, a bassist and composer whose virtuosity on both electric (often fretless) and acoustic instruments was matched by his versatility, died April 11 at … END_OF_DOCUMENT_TOKEN_TO_BE_REPLACED

Ron Miles, a cornetist, composer, and educator who became a revered and innovative figure in jazz while maintaining a career in the far-flung state of … END_OF_DOCUMENT_TOKEN_TO_BE_REPLACED