Skip to content
Become a member and get exclusive access to articles, live sessions and more!
Start Your Free Trial
Home > Features > William Hooker: Looking at the Next Step 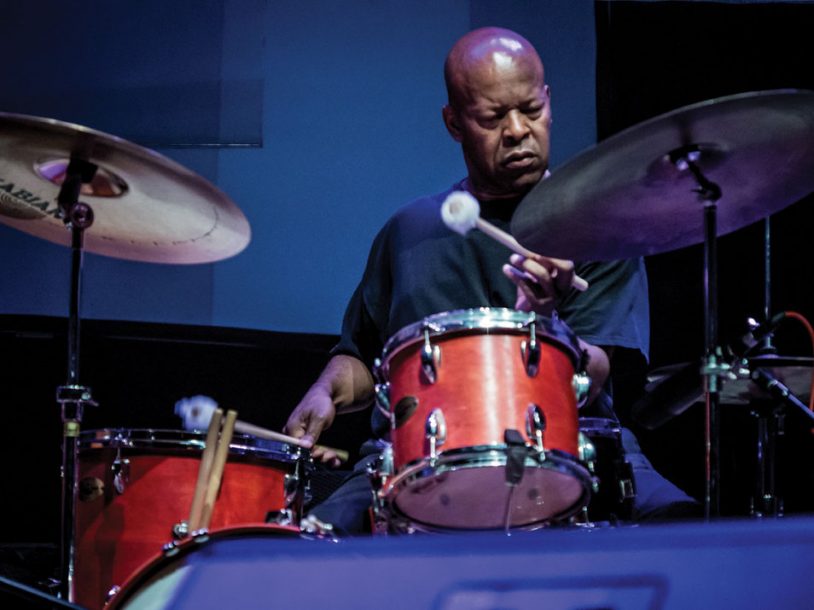 As soon as I step off the bus from Philly in Midtown Manhattan on a drizzly August afternoon, William Hooker is there to greet me with a beaming grin and a large umbrella to share. We’ve made plans to talk over dinner prior to a recording session at pianist Mark Hennen’s Piano Magic loft space downtown, but the ever-prolific drummer-composer has added another stop to the agenda. As he leads me to the nearby rehearsal and studio space he’s used for the past 30 years, Hooker, bristling with energy at 67, says he needs to play the drums before our interview or else “I’ll be all up in your face.”

A few minutes later, he instructs me to switch off the lights before embarking on a polyrhythmic exploration in complete darkness, his preferred element for practicing. The visual environment plays a key role in Hooker’s music; in recent years he’s used lighting or films to alter the tone of a performance. “If you change color every 10 or 15 minutes, regardless of how you change it, it has an effect on the whole performance,” he explains. “It’s good to throw people curves so they don’t feel like, ‘I got this.’ I don’t mean that in the sense of doing it just to be a pain in the butt. It’s a part of being creative.”

That evening, after climbing the five flights to Piano Magic, Hooker demonstrates that approach as he sits in the center of a circle of musicians, urging them through the recording of his latest composition, “Others Unknowing.” As the tape rolls, he shouts encouragement to saxophonist Ras Moshe, or suddenly springs from his stool to instruct guitarist Dave Ross to grab the slide from his case. Hooker is serving solely as conductor on this occasion, but apparently the impromptu session earlier failed to get the playing out of his system; as the music proceeds, he wanders Hennen’s instrument-filled loft, striking temple bells or beating on a pair of congas.

It’s that same sort of restless invention that is responsible for Hooker’s ever-growing, incredibly eclectic discography. Along with “Others Unknowing,” he has a new recording by his trio the Gift (Roy Campbell, trumpet; Dave Soldier, violin and guitar) and his first spoken-word album already in the can. Within the last year he’s released the dual-guitar CD A Postcard From the Road (New Atlantis) and the quintet album Channels of Consciousness (NoBusiness), recorded live at Roulette in Brooklyn. The latter is a polyrhythmic onslaught, with percussionist Sanga dodging and weaving around the leader’s propulsive attack while Hooker vocally prompts Ross, bassist Adam Lane and trumpeter Chris DiMeglio toward dramatic deviations from his scraps of composed thought.

This irrepressible urge to create has steered Hooker on an iconoclastic musical path for more than 40 years. Though he arrived in New York in 1974 and immediately fell into the thriving loft scene-his 1978 debut, …Is Eternal Life, features both David Murray and David S. Ware-he has remained well apart from the various scenes and cliques that comprise the NYC avant-garde. “It was a very conscious decision,” Hooker says. “Number one, in terms of jazz there’s been this prejudice about drummers as leaders for a long time, so I had to transcend that. I stuck to my guns in an effort to play my own stuff. I love all these players to death; these are my brothers and sisters. But I play music with a spiritual goal, and that spiritual goal is a very independent path. I’m always trying to get down to the essence of who is William Hooker? That impulse for me has always been singular.”

When you’re on TV, everybody knows you, or at least thinks they know you. Take Kevin Eubanks, who was on NBC’s Tonight Show five nights … END_OF_DOCUMENT_TOKEN_TO_BE_REPLACED

Jimmy Katz leads many lives. He is the preeminent currently active jazz photographer, and has shot more than 200 magazine covers and over 600 recording … END_OF_DOCUMENT_TOKEN_TO_BE_REPLACED

Take a look at Blue Note Records’ release schedule for 2022 and it’s hard to miss the significant percentage of electronic-oriented music. In March, the … END_OF_DOCUMENT_TOKEN_TO_BE_REPLACED